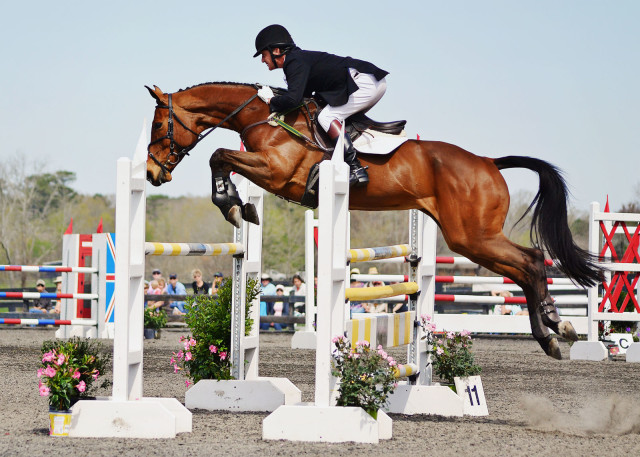 Kurt Martin and Anna Bella at The Fork CIC3*. Photo by Jenni Autry.

The USET Foundation announced this afternoon that Kurt Martin has been awarded the 2015 Amanda Pirie Warrington Grant, which will give him $5,000 to train and compete next season with Anna Bella, a 8-year-old Holsteiner mare he owns. The announcement follows Kurt being named to the 2015 USEF Eventing High Performance Training Lists earlier this week.

“This grant is very important for someone that is in the position that I am in,” Kurt said in a statement. “I own my own horse that I campaign. To be able to focus on the best results and prepare for each competition is really helpful. I don’t know any other way to do that right now, so it’s a great opportunity to advance. Otherwise I wouldn’t have it, so it means a lot.”

Kurt and Anna Bella won the Fair Hill CIC3* this spring and were sixth at Jersey Fresh CCI3* before receiving a Jacqueline B. Mars Competition and Training Grant to compete on the U.S. Nations Cup team at Boekelo CCIO3* last month. A minor injury forced them to withdraw and reroute to the Dutta Corp Fair Hill International, where they finished 18th.

The grant is given in memory of Amanda Pirie Warrington to provide financial assistance to a rider identified as having great talent and the ability to represent the U.S. in the future. It’s great to see the grant go to such a deserving, hardworking rider. And, of course, we have a soft spot for Anna Bella after talent spotting her last year. Best of luck to Kurt and Anna Bella as they look to take 2015 by storm.