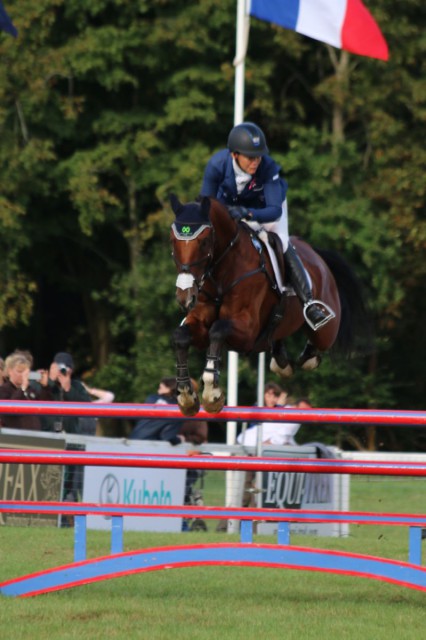 We just wrapped up the CIC3* 8/9YO show jumping here at the Blenheim Palace International Horse Trials and it’s just after 6pm. Kylie Lyman and Lup the Loop had the third fence down and one time penalty for 5 total, and Tamie Smith and Dempsey II had the first fence and the middle part of the treble down for 8 total.

Dressage leader and 2014/2015 winner Jonelle Price had three time faults on her grey mare Ascona M to drop behind Tom McEwen on Toledo De Kerser who’ll go into the cross country tomorrow in the lead.

Kylie Lyman is using the competition here as part of an extended European preparation for Boekelo. She’s been based in Ireland since July, and has competed at an Advanced/Intermediate level horse trial at Tattersalls, the CIC3* at Millstream and now this. She told me she was delighted with the way her horse jumped today and is looking forward to riding the cross country tomorrow.

“Historically he’s been a very good show jumper and it’s easy to go in and be as confident as you could be despite all the atmosphere. He tends to handle all that well but this is the most he’s ever seen, and we don’t get to jump off grass very often let alone this. I’ve never jumped him off this type of footing before so I didn’t know what to expect and I could not be happier with him.

“I take full responsibility for the rail we had, I needed to get him straighter out of the turn and I didn’t, and I think I could have helped him out more but he felt like he was careful and rideable and did everything I asked and didn’t get too distracted by anything or the footing, so I’m just so excited by him. He always go out and tries. and doesn’t get too phased by anything. I love him, he’s a great horse!” 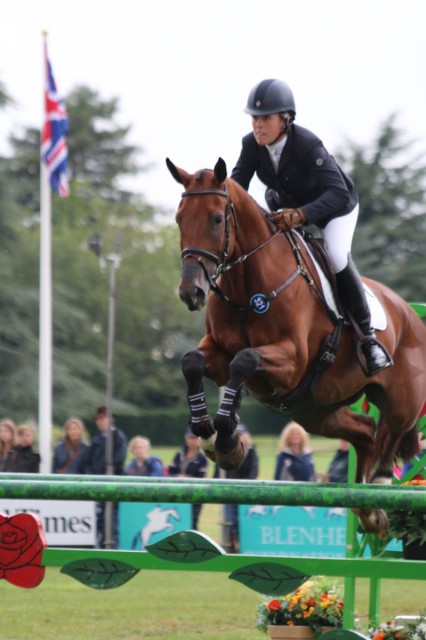 Kylie Lyman and Lup the Loop. Photo by Samantha Clark.

The course caused its fair share of trouble today, probably in part due to the footing which was torn up in parts where the ERM arena had been earlier, and in part because it was a twisty course. “For us,” Kylie admitted, “walking it, it wouldn’t be a course that I would have thought would have suited the two of us, but he was super, he was great.”

Kylie liked David Evans’ cross country course for tomorrow much better. “I think it’s amazing. I’ve never been here before and didn’t know what to expect but every part of being here is just amazing. I think the cross country asks a lot of questions but there’s not any one thing in particular that I’m concerned about but rather the whole course and I know I need to stay patient. I want to be quick but not by letting it get too forward. The grounds are beautiful and I think the way the footing took all the rain today… I just couldn’t be more excited about it.”

Kylie is temporarily based at her Irish husband’s yard just outside Goresbridge where they have a couple of youngsters, and their 2-year-old daughter is getting to spend some time with that side of the family. “It’s been quite the trip already! It’s been a lot of fun but she’s not here this weekend as she’s not at a horse show friendly age; she’s a little too full of it. But she’ll be at Boekelo–I have no choice!”

Ashley Adams produced Lup the Loop to the one-star level and then Kylie took over the ride for Geoff and Joanie Nichols. “When I came back I did a couple of Preliminaries, and then we did our first Intermediates and two-stars and he’s been my first real Advanced horse. I did a couple before with Trading Aces (also sourced by Geoff and Joanie) but not a full season of anything, so my first CCI3* and all of that was with with him. He’s young but you couldn’t have a better brain or a better temperament for it all so he gives you a bit of time to enjoy it all too.”

Lup the Loop is an 8 year old Irish gelding. “He’s very trainable and rideable and athletic and has everything you’d look for in a horse. I’m excited about him.”

Kylie will start the cross country in 27th position, and Tamie will go forward in 41st position. CIC3* cross country starts at 9am tomorrow morning but before that we have the CCI3* Final Horse Inspection. We’ll also be bringing you the CCI3* show-jumping, and don’t forget to tune in and watch the ERM finale. It’s all going down at The Blenheim Palace International Horse Trials!