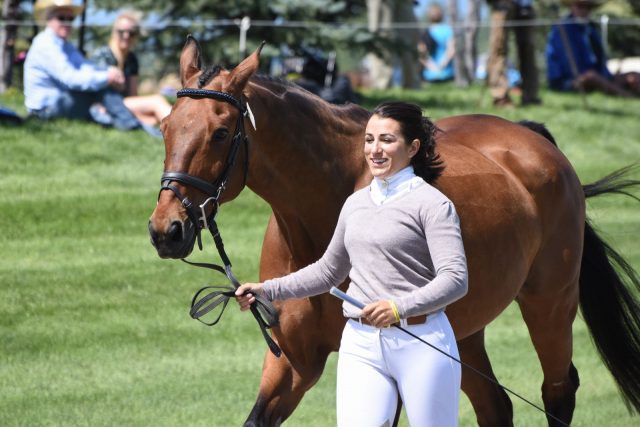 Lauren Billys and Castle Larchfield Purdy in the first horse inspection at The Event at Rebecca Farm 2019. Photo by Shelby Allen.

“He grabbed the bit and ran!” is Lauren Billys’ description of how Castle Larchfield Purdy attacked the final uphill stretches during his most recent Advanced cross country course. That might be expected from her 2016 Rio Olympics partner and hopeful for the 2020 Games, but instead there have been some dark months when Lauren wasn’t sure what the future held for him. He’s 17 and first had to recover from a severe colic last fall.

He did that, but in the process presented more clear symptoms confirming something Lauren had long suspected: respiratory issues.

“I always knew that his breathing was the limiting factor in his fitness,” she says of the big Irish Sporthorse. It became more pronounced as she began legging him up this past spring, after he had fully recovered from the colic. Prior to that, the main hint of breathing challenges was that Purdy’s respiratory rate was slow to recover after exertion, especially compared to that of lighter Thoroughbreds and other breeds who excel in the rigorous discipline. However, Purdy hadn’t been coughing or having any nasal discharge, common signs of respiratory tract issues. And he was otherwise performing at his peak.

As he regained fitness this year, the symptoms were more obvious. On conditioning gallops, he hung his tongue out the side of his mouth – “we think to get more air’’–  and the effort to inhale was audible. “It wasn’t like he was roaring, but you could just hear him struggling to inhale,” explains Lauren, who is based in California and represents Puerto Rico in international competition. 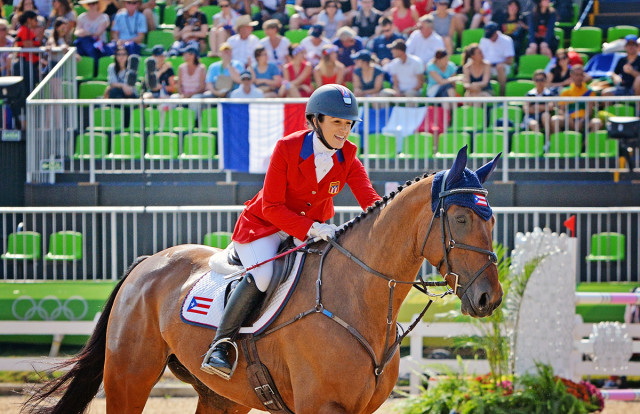 Purdy was referred to Phoebe Smith, DVM, DACVIM, an internal veterinary medicine specialist with Riviera Equine in California’s Santa Ynez Valley. An extensive respiratory exam included the use of the relatively new dynamic respiratory endoscope while Purdy was galloping, and a cytology report drawn from a bronchoaveleor lavage. The exam confirmed Lauren’s fears: Purdy, indeed, had respiratory challenges.

The dynamic endoscope revealed some functional instabilities in his upper airway that only occurred under exertion. The BAL revealed a moderate level of Inflammatory Airway Disease (now often referred to as a condition on the Equine Asthma Spectrum) and a mild case of Exercise Induced Pulmonary Hemorrhage. The functional instabilities occur in the upper airway, and the IAD exists in the lower airways. For Purdy, it was likely that each condition affected the other, though it’s not possible to say in what way or to what extent.

Lauren and Dr. Smith set about “treating the treatable:” IAD and, by treating that, likely eliminating the mild EIPH.

Multiple studies estimate that over 80% of horses have IAD to some extent, often without symptoms that even a conscientious owner would detect. It occurs when irritation causes inflammation and constriction of airways, impeding the transfer of oxygen from the lungs to the rest of the body and further stressing an already delicate system. It is not curable, but it is manageable.

EIPH is a condition common in racehorses and others who exert themselves to the extreme for short bursts. It occurs when tiny blood vessels in the lung – 1/110th the width of a human hair — burst. In mild cases, like Purdy’s, the amount of bleeding is so small it can only be detected in a microscopic evaluation of a bronchoaveolar lavage. 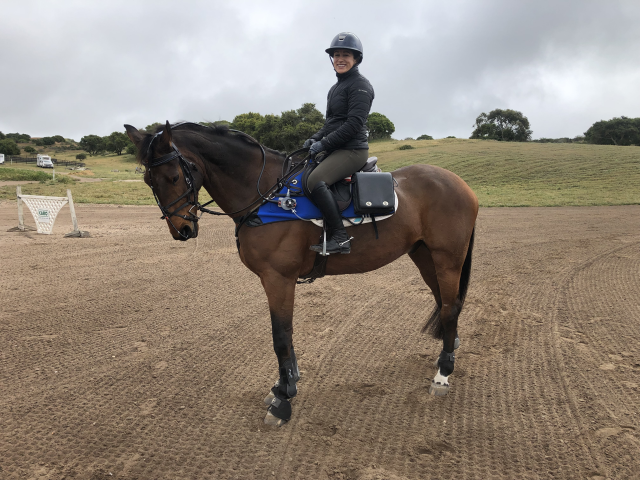 Purdy wearing the dynamic respiratory endoscope, a technology that enabled the vet to take pictures of his respiratory tract while Lauren was doing a normal conditioning gallop. Photo courtesy of Kim Miller.

A Flexineb Portable Nebulizer was the first step to bringing Purdy immediate relief, delivering the bronchodilator medication, albuterol, and the corticosteroid, fluticasone. An intensive, initial 90-day course of treatment with these aerosolized medications brought the IAD under control and enabled Purdy to gradually build up his fitness.

But Lauren wanted long-term solutions and to keep Purdy at his peak without medications that are not allowed in competition. With the help of the Purdy Syndicate, Lauren imported him in 2013 and galloped on to fulfill a lifelong Olympic dream. His well-being is Lauren’s top priority, but with him so fit, capable and willing, she believes the 2020 Tokyo Olympics are fully within reach so long as his respiratory conditions can be controlled.

On Dr. Smith’s recommendation, she started Purdy on Haygain high-temperature steamed hay in April of this year. “With IAD, we know it’s inhaled particulates they are reacting to, so the overarching goal is always to reduce that,” the veterinarian explains.

Haygain hay steaming rids hay of 98% of the breathable dust, mold, fungi and bacteria  found in even top-quality hay.  In California’s dry climate, hay is often dustier than that found elsewhere in the country, while mold spores may be less of an issue.

Lauren’s team had been wetting hay to dampen dust and appreciates the switch to steaming. Purdy loves it and it’s much less of a mess, she notes. At home in the Carmel Valley area, Purdy spends more hours on grass pasture to avoid barn dust and his paddock is sprinkled regularly to further minimize breathable irritants. (Dr. Smith cautions that conventional wisdom regarding the respiratory benefits of an outdoor life don’t always apply. “Sometimes it’s dustier outside, especially if it’s windy or there are fires in the area. It should really be considered on a farm by farm basis.”)

Monitoring Purdy’s respiratory recovery rate after workouts with similar levels of exertion over these last four months, Lauren says the new routine is improving that once weak metric of his fitness. That and his performance, energy and attitude suggest that the mild EIPH and IAD are well controlled.

In mid-July, Purdy went off the nebulized albuterol and fluticasone. Instead, he’s getting nebulized saline solution and EquiSilver, a chelated silver product that kills infectious microrganisms: both are competition “safe.” 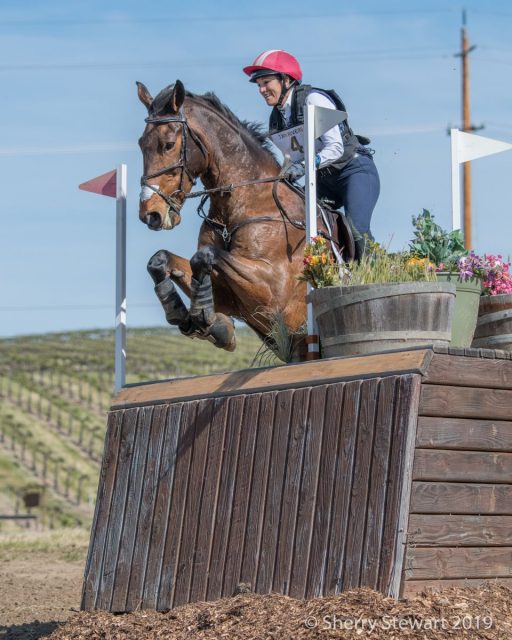 Lauren Billys and Castle Larchfield Purdy back in action this spring. Photo by Sherry Stewart.

Based on how Purdy was feeling early in his steamed hay-powered routine, Lauren was optimistic as they headed to the Rebecca Farm CCI4*-L in late July. “Honestly, this whole process has given him a new lease on life,” she explains. “I never thought about how this could affect him.” Even in the dressage phase of spring competitions, “He had so much energy and perk,” she reflects. “And it carries from one day to the next.”

Speaking of the Spring Event at Woodside in late May, where she and Purdy finished second at Advanced as a warm-up run, Lauren recalls, “I’ve run Woodside I don’t know how many times… Every time, I’ve always had to kick him when we get to that last uphill stretch. This time, he grabbed the bit and ran. He’s never felt like that before!”

There’s a lot riding on their Rebecca Farm performance. To represent Puerto Rico at the Olympics again, Lauren and Purdy need to be the #1 or #2 ranked pair in Latin America. Right now they are #1 and Lauren believes a top 3 finish at Rebecca Farm will lock up the Tokyo track. “If that happens, I think it will be hard for someone to knock us off.”

As of Saturday morning, she’s well on her way as the CCI4*-L dressage leader. Click here to follow our Rebecca Farm coverage.

Tokyo or no, Lauren has already realized one Olympic dream with Purdy. Two would be amazing, she acknowledges, but having a healthy, easy breathing horse is even more important. 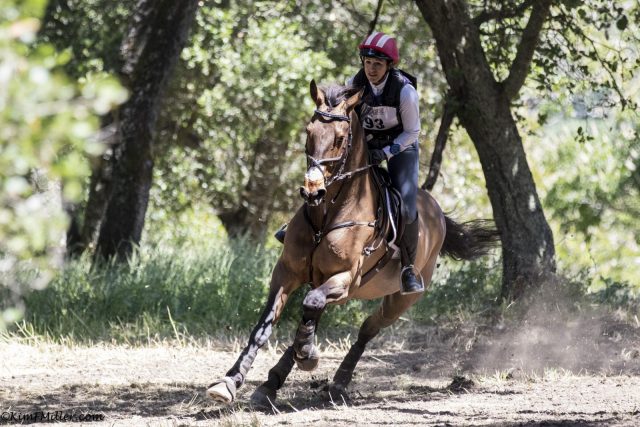