In her latest entry, our guest writer Lauren Kieffer describes the event that turned her into an official four-star rider.  I was so proud of Lauren throughout the entire weekend at Rolex.  Lauren’s XC was one of the highest quality rides on Saturday and that’s coming from people much higher up on the food chain than myself.  One day you are going to look back and think to yourself: that girl that’s standing on the podium — I read about her first 4* on Eventing Nation.

——
Well my little Arab jumped around “The Three Day That Shall Not Be Named”. I guess we can call it Rolex now. Rolex was a great experience all around. I think the hardest part is how anti-climatic it is when it’s finally over and enjoying it without picking apart every mistake. The whole week started on a high when I won the Dubarry boots for best dressed at the first jog. I considered going home while I was ahead, I was afraid my luck may have peaked too early in the week! There was a lot of laughter in the barns about winning best dressed considering I am rarely seen in anything but my trusty camo hat and Carhartt, but I busted it out for the jog, I wanted those boots badddd.
We did our dressage Thursday afternoon and Snooze was pretty lit by the atmosphere, it was a great feeling trotting into that grandstand arena though. He wanted to be pretty fresh and we had some less than stellar moments but he also had some really good moments such as his extensions and changes. The great part about doing our dressage on Thursday was having all day Friday to think about my cross country. I got up and had a great jump school in the morning and then took another walk around my course. The more I walked it the less nervous I got and the more I was looking forward to it. 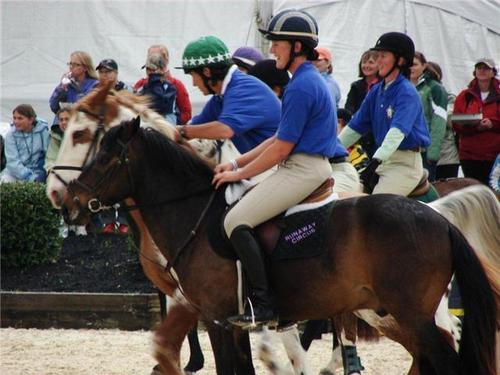 I was pretty excited when Cathy Weischoff asked me to ride in the Mounted Games at noon and it was a risky but fun distraction. My trusty steed was a tiny pony named Chip. We took a warm up lap around the arena and he seemed pretty rideable so Cathy and I had a little race, and let me tell you, Chip may be small but he is a strong little bugger and I may have mauled down a group of Pony Clubbers in an attempt to stop. I was on team Gummi Bears who were great sports in explaining the games to me and darn it if these kids can’t ride. The Gummi Bears did end up winning the prestigious Prince Phillip Cup at the end of the weekend. I like to think Chip and I played a small part in their success, or maybe it was more like they won despite us….
Saturday morning rolled around, luckily I got a good night’s sleep because for some reason I get sleepy whenever I’m nervous. I got up and took a last walk around the course and then I went back to my stall and took a nap till I needed to hop on. The best part about getting on is that once you are sitting on your horse the nerves go away and you focus on your job. We had a great warm up, he was fresh but rideable so we headed to the start box, we walked around it a couple times, 10-here it is-9-8-the biggest countdown of my life so far-7-6-now or never-5-4-HOLD. You can’t be serious. Well ok I can wait another minute, the countdown starts again 10-9-8-7-do you mean it this time?-6-5-don’t mess with me-4-3-2-1-GO! OK! And we were finally off! Snooze went right into a rhythm from the start and was right on everything. He just kept jumping bigger and better the whole way around and finished the course a very brave and happy pony. It was such a great feel jumping through the Duck Pond, the first real question and thinking “We’ve got this.” And galloping down to the Head of the Lake and seeing the crowd, and nothing beats crossing the finish line with all of your friends and family cheering.
Snooze’s Arab blood was evident in the D box when his low heart rate amazed the vets and he recovered quickly and was mostly concerned about how much grass he could shove into his mouth. It was nice going so early and after some fluids and a few icings we just let him rest and recover. He came out on Sunday morning feeling great and was a gentleman at the jog.
And finally it was time for show jumping, my low point of the weekend. He warmed up really well and I was feeling really confident going in, but unfortunately it didn’t go as planned. #2 to #3 were two oxers on a pretty forward 7 strides, I was on the fence about whether to do it in 7 or 8 strides because he doesn’t have a big stride but I had watched several people go and they all did the 7 and I made the rookie error of doing what everyone else does instead of doing the right thing for my horse. I didn’t get the 7 done and we crashed into the 3rd fence. Let me tell you, it was about the longest five seconds of my life watching that fence fall down, but I refused to let myself get flustered so I gave him a pat, waited for the ground crew to get that entire freakin jump set back up while trying to ignore the thousands of people staring at me and my little Arab, and then carried on with the course which he jumped brilliantly, not touching a rail.
I felt like I had let Snooze and his fans down but on the other hand I can promise you that I will not make the same mistake twice and I have come out of the weekend more motivated than ever.
Snooze is now in Virginia living his fat kid dreams for the next month and now I am in Florida jumping back into reality riding and packing to turn around and go to Virginia on Thursday. We haven’t made a concrete plan for the fall yet but who knows, maybe the Maggot will be leaving on a jet plane….