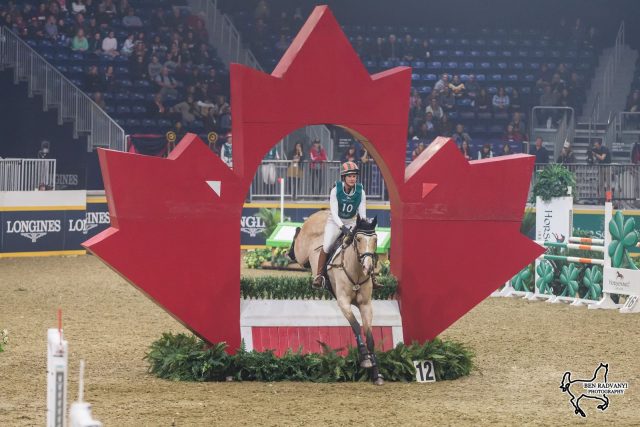 Lauren Kieffer, the Olympic rider from the United States, is in the lead of the $20,000 Horseware Indoor Eventing Challenge at Toronto, Canada’s Royal Horse Show. Riding the buckskin Canadian Sport Horse mare, Glendening Avis, loaned to Kieffer for the two day competition by Callie Evans. Kieffer rode a careful round taking the longer routes to go clear with the fastest time of the night. Giving all credit to the mare and Evans’ careful training, Kieffer, who only sat on the horse for the first time at 5:00 a.m. that morning, modestly claimed that she, “just went along for the ride.”

The words ‘Indoor’ and ‘Eventing’ do not usually appear together, but once a year for two consecutive nights, The Royal Horse Show produces an exciting and thrilling exhibition of top calibre riders and horses challenging each other over a mix of cross country fences and show jumping rails. Spectators are on the edges of their seats as the talented riders steer their brave horses at a speedy pace over the type of solid cross country tables, banks and brush fences usually seen only at outdoor events as well as delicately poised show jump rails that may be almost blown off their cups by the sheer speed of the horses as they jump over them.

This year’s $20,000 Horseware Indoor Eventing Challenge has a distinguished line-up of Olympians from both sides of the border who have recently competed at the World Equestrian Games as well as several other Canadian Equestrian athletes keen to prove their mettle over the course designed by Captain Mark Phillips.  The confines of the indoor arena space makes for some tight lines to fences, and as Kieffer claims the course, “rides a bit like a washing machine.”

The crowd is always thrilled by the solid imposing fences and the bank jump, but perhaps the biggest challenges are the show jump rails which can catch out even the best of riders.  The final fence on course, a wide spread with show jump poles painted the colours of Ireland, home to Horseware, the event’s sponsor, proved to be the nemesis for several partnerships.

Lindsay Beer was first into the arena riding El Paso, a chestnut Trakehner gelding owned by her Mother, Penny Beer. El Paso and Beer, as the pathfinders on the night, had a successful round until the very last fence where they had a rail down to the groans of the crowd.

Diana Burnett riding her own horse Manny, an elegant bay thoroughbred, were unfortunately eliminated when they went off course.  They will be looking for redemption tonight in the second round. 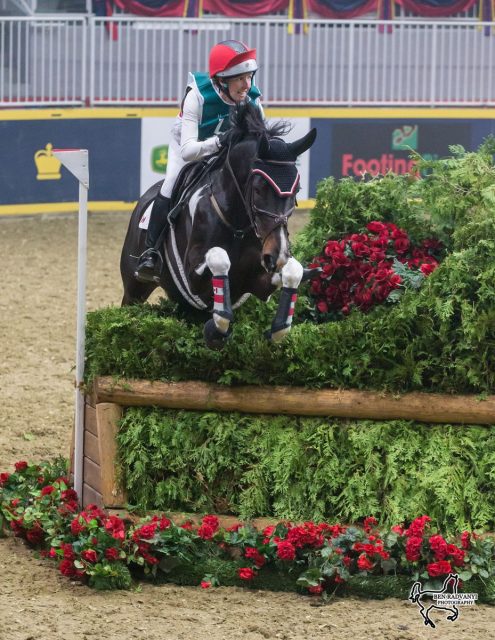 The audience was on the edge of their seats with excitement when Selena O’Hanlon galloped into the ring riding Unique, a Paint mare loaned to her for The Royal by Sondra Blair-Bevridge. O’Hanlon was named Canada’s Equestrian of the year in 2017 and has had a busy, successful year riding at Badminton in England, winning the Bromont Horse Trials in August and competing at the World Equestrian Games in September. Unique and O’Hanlon, having had very little time to get acquainted before the show, will also be looking for redemption tonight as they had a couple of run outs on the course.

Next into the ring, Karl Slezak put in a well ridden round on Fernhill Choco Royale, owned by Katlyn Hewson-Slezak, cutting a few corners to cut time and pouring on the speed but again the final rail of the course came down despite the strong efforts of the dark bay Irish Sport Horse.

Colleen Loach, a member of Canada’s Pan American, Olympic and World Equestrian Games teams, charged into the ring riding Serendipity, Brooke Massie’s  bay Thoroughbred mare. Loach burned up the arena, turning up the speed, jumping several fences at an angle and looked like having a clear round until the rail at the very last fence fell again.

Riding into the ring next was Lisa Marie Fergusson on Honor Me, a chestnut Welsh Sport Horse owned by Fergusson herself. Fergusson, another member of Canada’s World Equestrian Games squad who rode in her first event at the age of 12, had a speedy round giving the crowd a shiver when Honor Me almost had a tip up at the bank.  Her clear round was marred by that pesky last fence as they dropped a rail at the oxer. 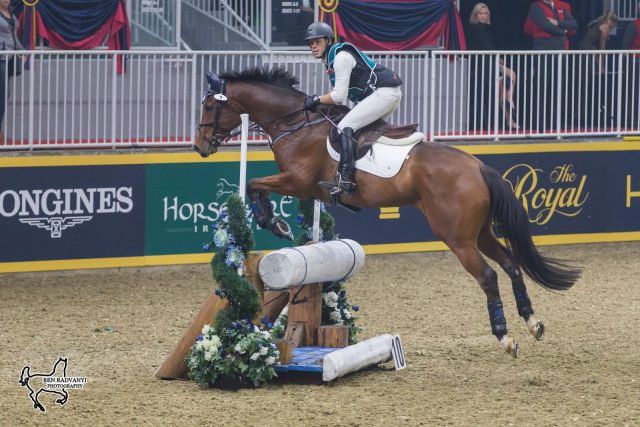 Brandon McMechan, an amateur rider competing very successfully at the Advanced level of Eventing, was next in the ring with his own bay thoroughbred gelding Oscar’s Wild. McMechan was going for the win as he and Oscar navigated the course, not appearing to speed but taking the smart routes and corners. The last fence stayed up to give McMechan and Oscar the lead momentarily until the next pair, night one leaders Lauren Kieffer and Glendening Avis.

Owned and ridden by Holly Jacks Smither, Candy King was the next horse in the ring. Riding for breast cancer awareness in honour of her friend Amanda Davidson, Jacks Smither braided her bay mare with pink braids and the horse wore a fly bonnet with a pink ribbon printed on it.  Candy King was both speedy and careful but again had the unfortunate last rail on the course. 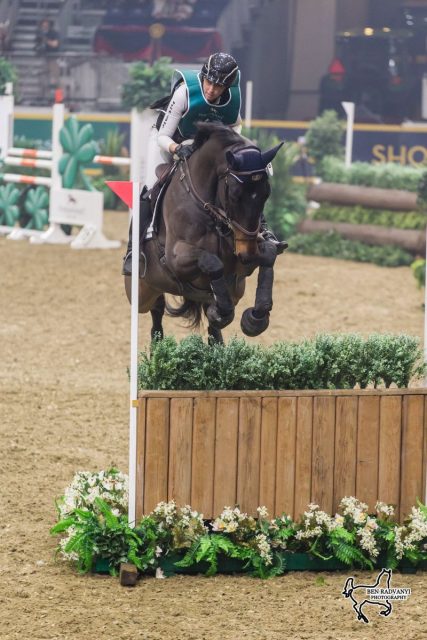 The final horse on course was Totally Frank, a bay Thoroughbred gelding owned and ridden by Kendal Lehari who began her eventing career at the age of eleven and has ridden in the Indoor Eventing class at The Royal since it’s inception.  Lehari rode an exciting course making tight turns on her big horse and taking many fences at an angle but taking a slightly longer route to the bank cost her time despite a clear performance with no rails down.

Talking to the riders about why they enjoy Indoor Eventing, they all talked about the adrenaline rush of the ride, the camaraderie of the group of riders at the event and, for those coming from the local area, the fun of having family, friends and supporters come out to cheer them on.

The Royal Horse Show, now it its 96th year as part of the Royal Agricultural Winter Fair, is a huge tradition for Canadian horse enthusiasts.Everyone is looking forward to another great night of Indoor Eventing tonight. Stay tuned for the wrap up tomorrow!