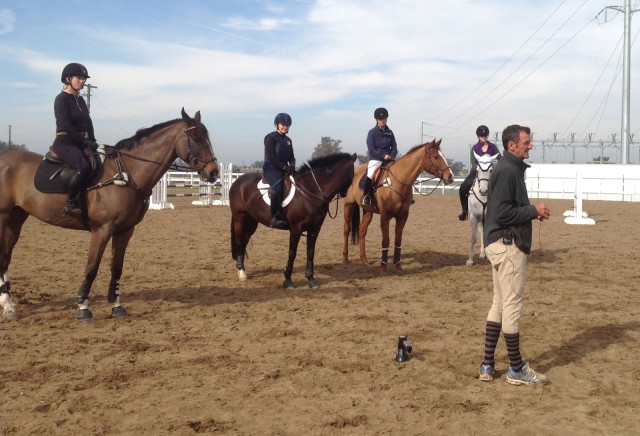 Having just moved to CA from the East coast, I was quite excited to learn that Mark Todd was coming to do a clinic here! Along with many others, I presume, Mark has always been one of my riding idols. He is no doubt one of the best and most classic Event riders of all time, and is definitely a master of cross country riding. So I was up before dawn to make the four hour drive to Fresno, to make sure I didn’t miss any of it! Here’s the recap: 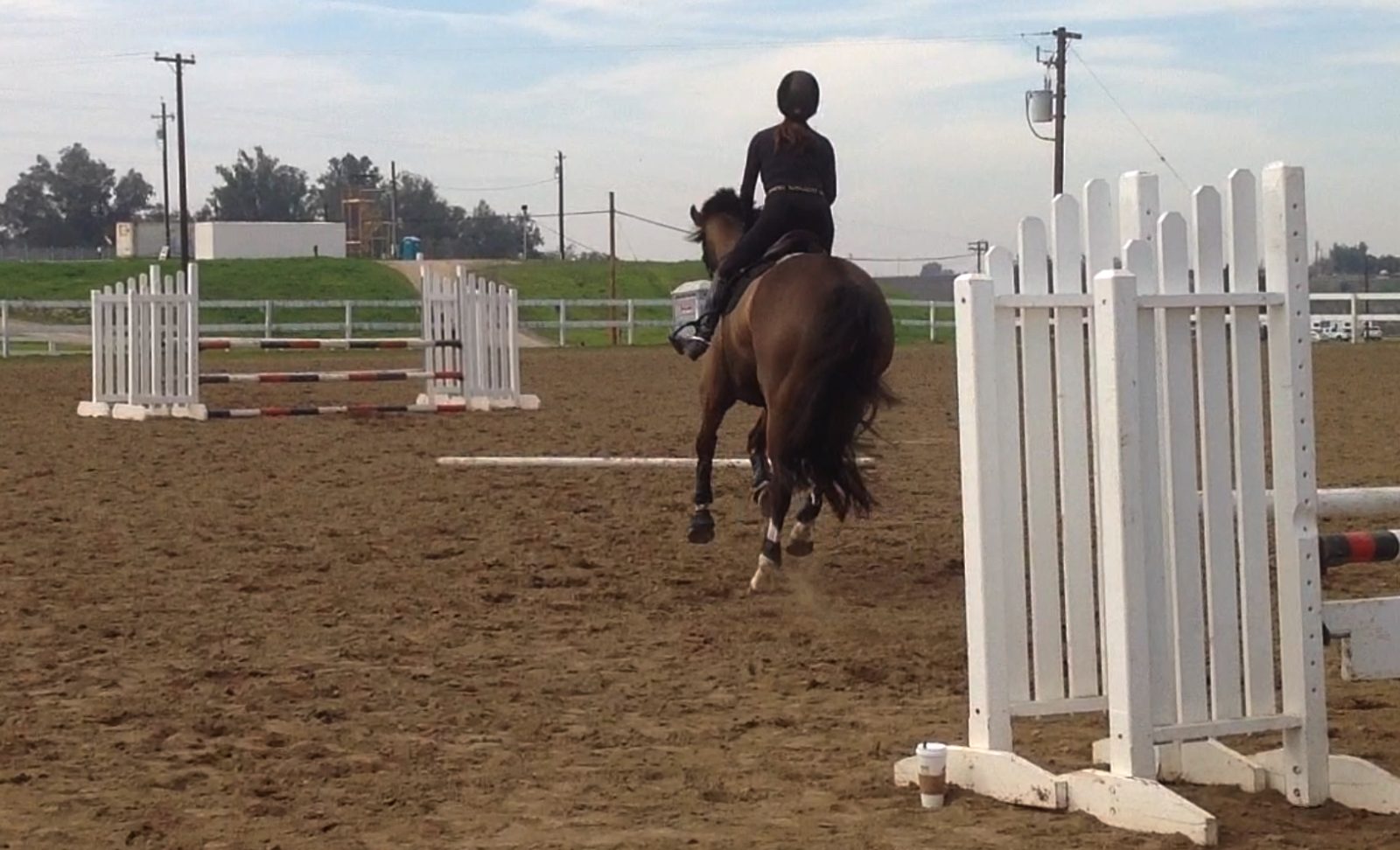 Each group followed the same general progression of exercises. Riders did flatwork on their own to warm up, and there were no traditional warm up fences. The first exercise was a great one. I think it was particularly challenging since the horses and riders were sent right to it with no simple warm up jumps to ease into jumping mode.

Three jumps were set on a slight to moderate curve, like a part of about an 80 meter circle. It was vertical, oxer, vertical — each placed about 5 strides apart.

Riders were first asked to asked to canter the curved line in a rhythm, putting a nice, quiet 6 strides in between both related distances. They were instructed to use an opening inside rein to guide their horse through the line, and to encourage them to land from each fence on the inside canter lead.

Many riders found this line difficult, as the tendency to drift to the outside through the curve would obviously change the distance they were covering between the jumps. The extra thrust involved in jumping the oxer in the middle made staying accurate on the line especially challenging – causing the horses to regularly bulge to the outside. Riders at ALL levels struggled to stay exactly on the intended line, and to keep the canter stride consistent.

They repeated this exercise both directions, while gradually raising the jumps up to the height that was appropriate to each level. Then he asked the riders to ride the same line with just 5 strides between each jump. This was, of course, fairly easy for the bigger striding horses.

But it didn’t matter if you were on a little or short strided horse or not, Mark wanted you to get it done – which proved to be quite difficult for some! The upper level groups were pushed a step further… being asked to do the first part of the line in 6, and the second part in 5. All done smoothly and in a rhythm of course.

The pole on the ground was to encourage the horse to do a lead change in the middle of the S curve, as well as to make the riders stay accurate on the S line that he wanted them to take. This steering exercise really challenged some of the lower level riders, but the upper level riders seemed to find it pretty easy.

Exercises were then added onto that one, turning it into a course. From the S curve exercise, they did a triple bar off of a turn, with a bending line to a one stride double. Then he added a tight right turn after that (about 120 degrees) to a vertical. For the upper level groups, Mark had strategically placed a row of (exceptionally brave!) spectators sitting in chairs, so that they were jumping this vertical after the in and out right into the people.

Along with being good experience for the horses, practicing jumping while being aimed right at the distraction of the crowd, this also meant that the riders had to land and immediately make a tight turn to the left.

Next they came back through the one stride combination the other way, oxer to vertical, with a slight turn to an oxer. From there, a right turn to a 3 stride line, and then into the same curved line that they started the day with. The various exercises on this course were challenging enough to make the riders have to learn what it took to get it done, and Mark was a stickler for doing each exercise exactly as he said.

A few good “one liners” that I caught from him that first day were, “Stop being a passenger, and start being a pilot,” “Have you got your drivers license?” and “Go on a circle… it’s a round thing.” 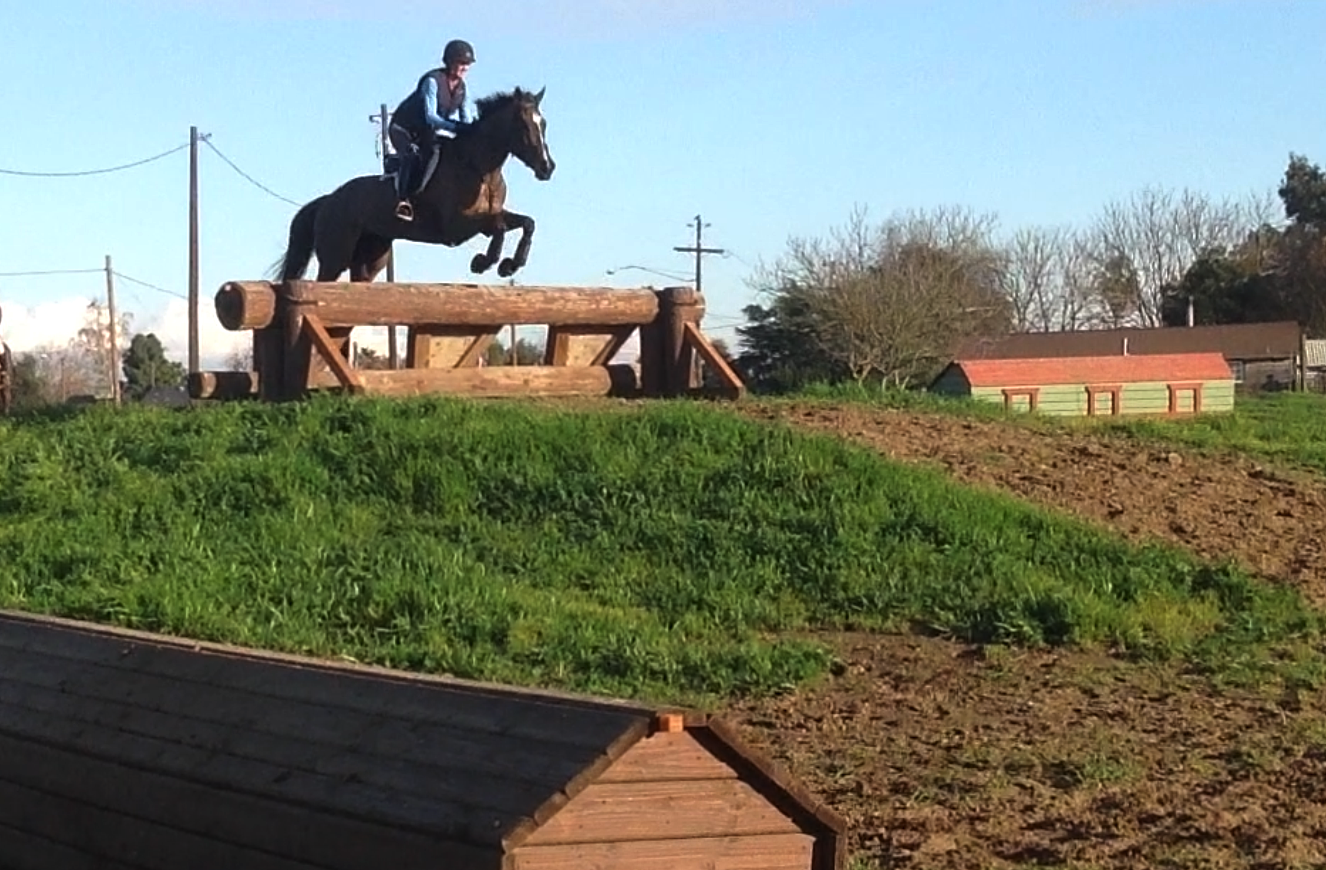 After having riders warm up on their own over some small solid jumps in the cross country warm up area, each group moved to a neat little play area with lots of rolling hills, and plenty of different obstacles to play with.  In addition to some simple house type jumps on rolling terrain, the lower level groups were challenged with a spooky “shark’s tooth” jump with a significant downhill slope on the landing side.

And once they were jumping that confidently by itself, they were asked to make a 90 degree turn to a roll top at the bottom of the hill (seen in the forefront of the above picture). In order to get this done, the riders learned how quickly they had to look at the next jump, and how important that it was to sit up and really ride the turn after the first jump!

The groups at Training and up were further challenged with a “log on a lump” — a big log sitting at the top of a mound, with a moderate uphill approach, and an equivalent downhill on the landing: 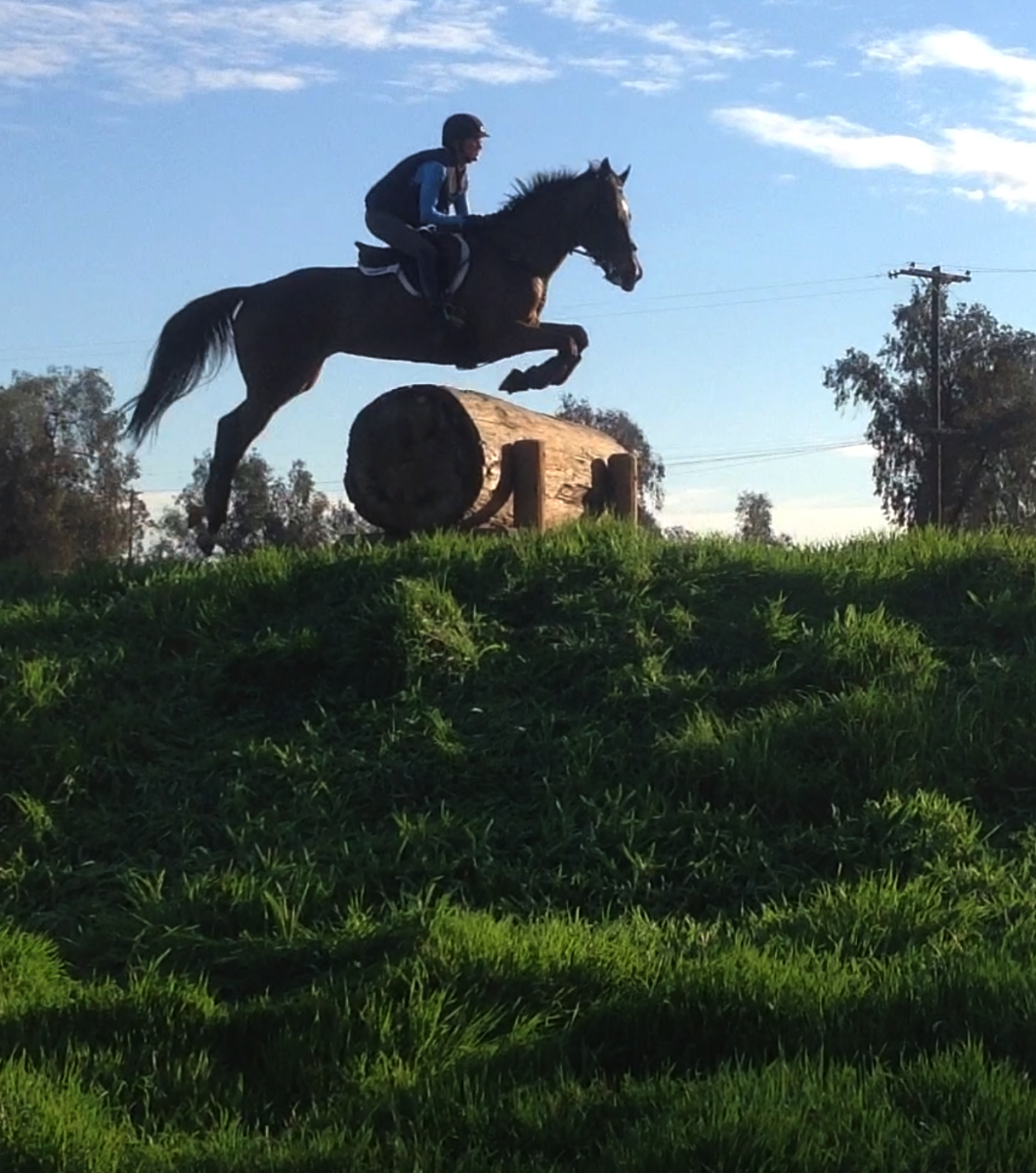 At the bottom of this hill and on a slight curve there was a skinny fence, which had guide rails on either side for the Training and Prelim groups. 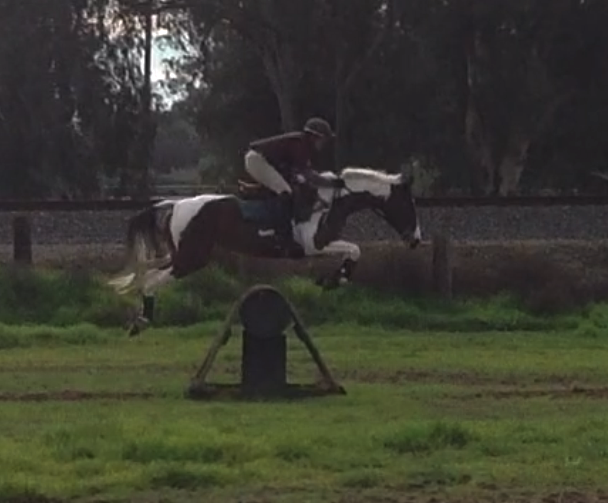 Riders learned that they had to really be positive when riding this complex. As weak or indecisive riding caused some of the horses to lose confidence. Next riders were asked to approach this same mound combination after jumping the previous shark’s tooth.

This turned this exercise into something similar to what the riders had worked on the day before in the show jumping — staying accurate on a curved line over 3 jumps, but this time including a skinny and some serious terrain questions! It is always a good sign when instructors use exercises which build off one another this way, as this means that the riders have been given the foundation that will set them up for success.

Again building on the same skills the riders just used, Mark next had riders at Training level and up jump a bigger downhill vertical, with a bending line to a narrow chevron at the bottom of the hill. All groups began this exercise with guide rails on the chevron, and the upper level groups were then tested without them. 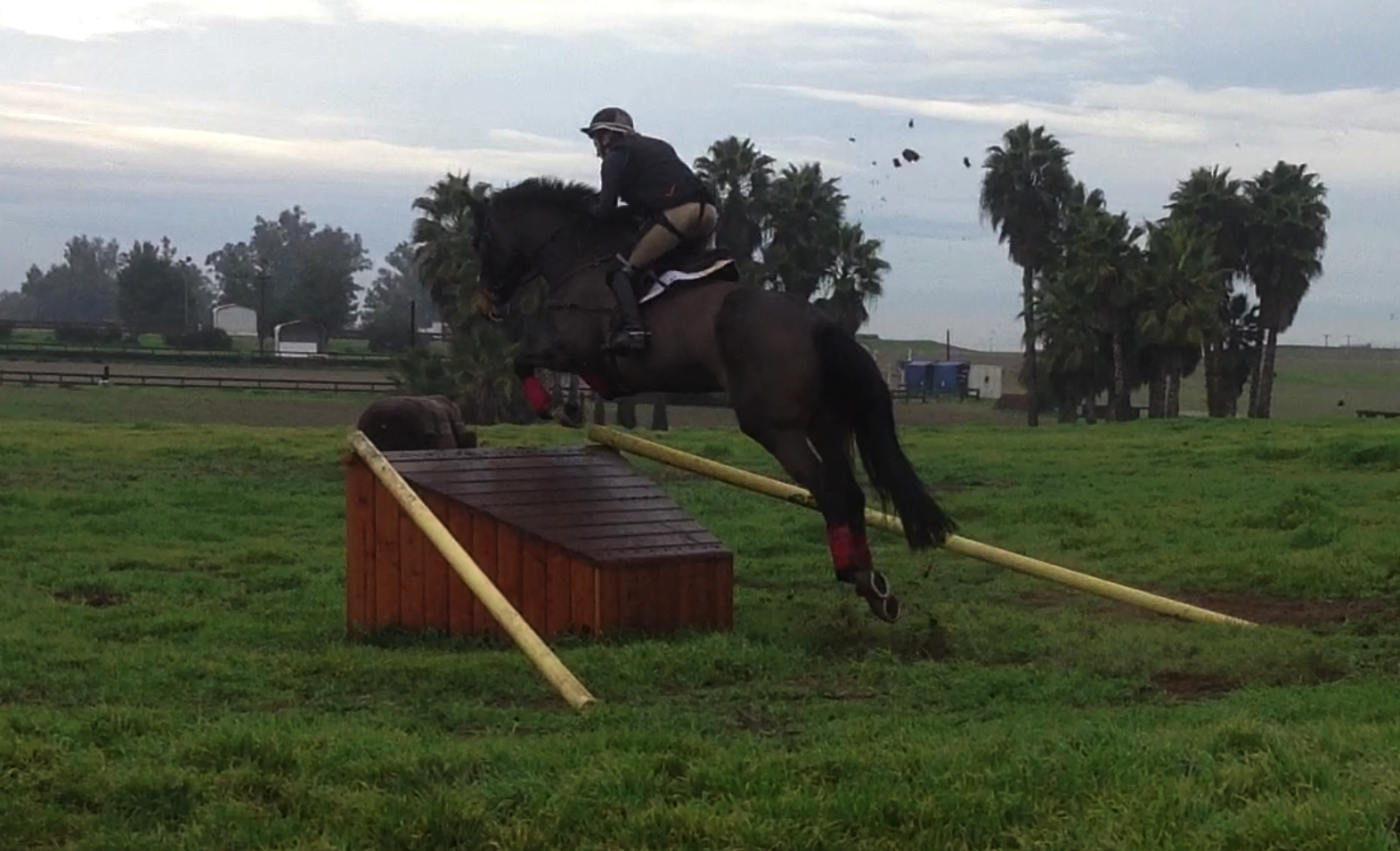 This exercise proved to be quite challenging to many riders! Many of whom had runouts to the left – as the bending line to the right encouraged the horses to lean towards their left shoulder: 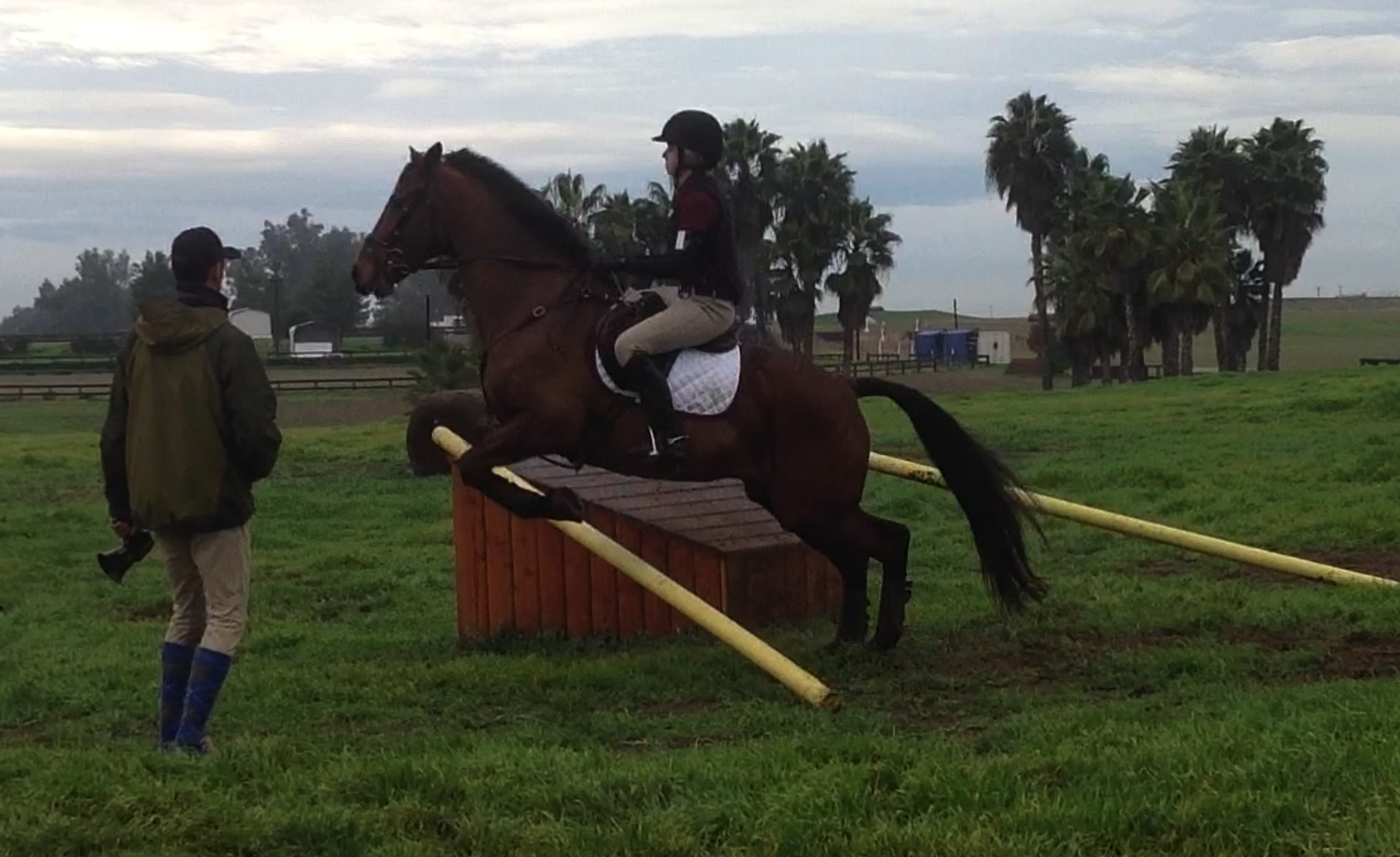 But everyone figured it out, and all were successful in the end! The upper level group added an even more challenging version which included a big corner after a downhill vertical.< 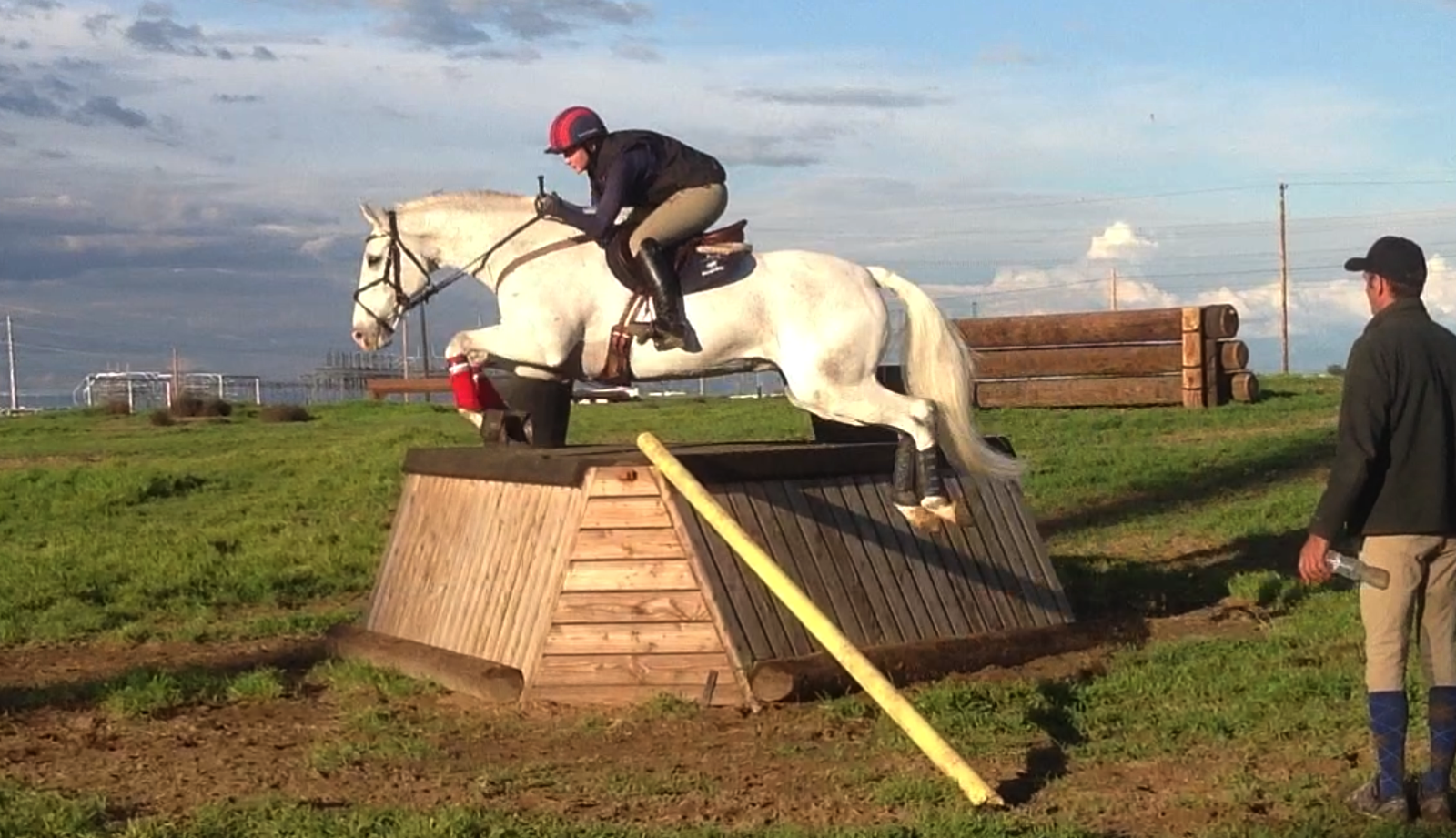 From there, all groups moved to the main water complex at the Fresno Horse Park, which offered lots of different options for the riders. They started with a fence before the water, through the long stretch of water, and house out of the water. Then came back over that same house into the water with a bending line to a bigger rolltop out of the water.

The upper level groups jumped from water to water over a “snake” fence, which was positioned right in the middle of the whole water complex. They also went on to jump some bigger logs into the water, and came out over another chevron… again with guide rails on it. 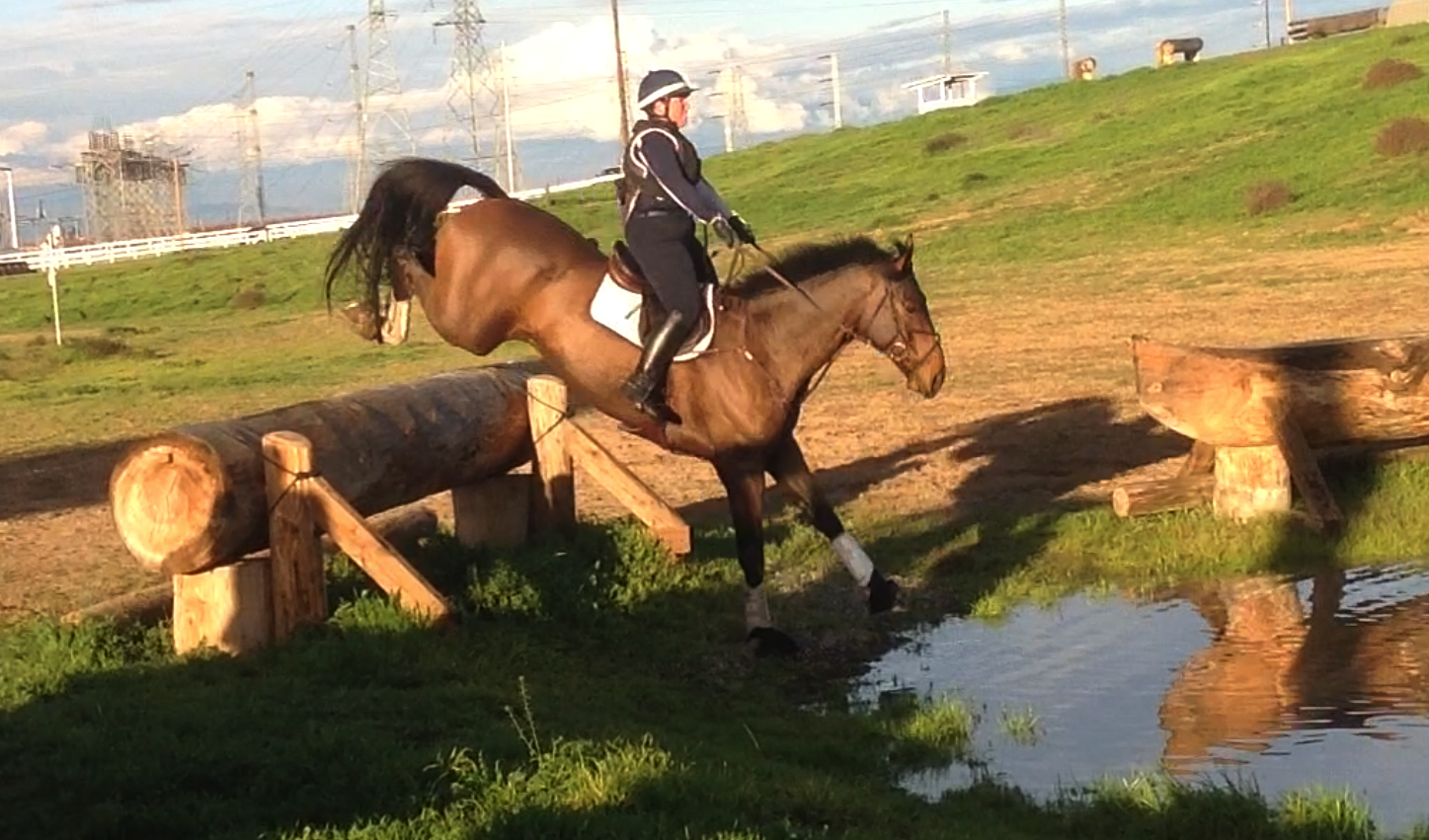 As they jumped their little courses around this water complex, groups at Training level and up also included a line of angled tables that proved to be quite difficult, especially for the Training level group. Since the second table was skinny as well as being at a sharp angle, quite a few horses tried an “exit stage left” maneuver. But again, all were successful in the end! 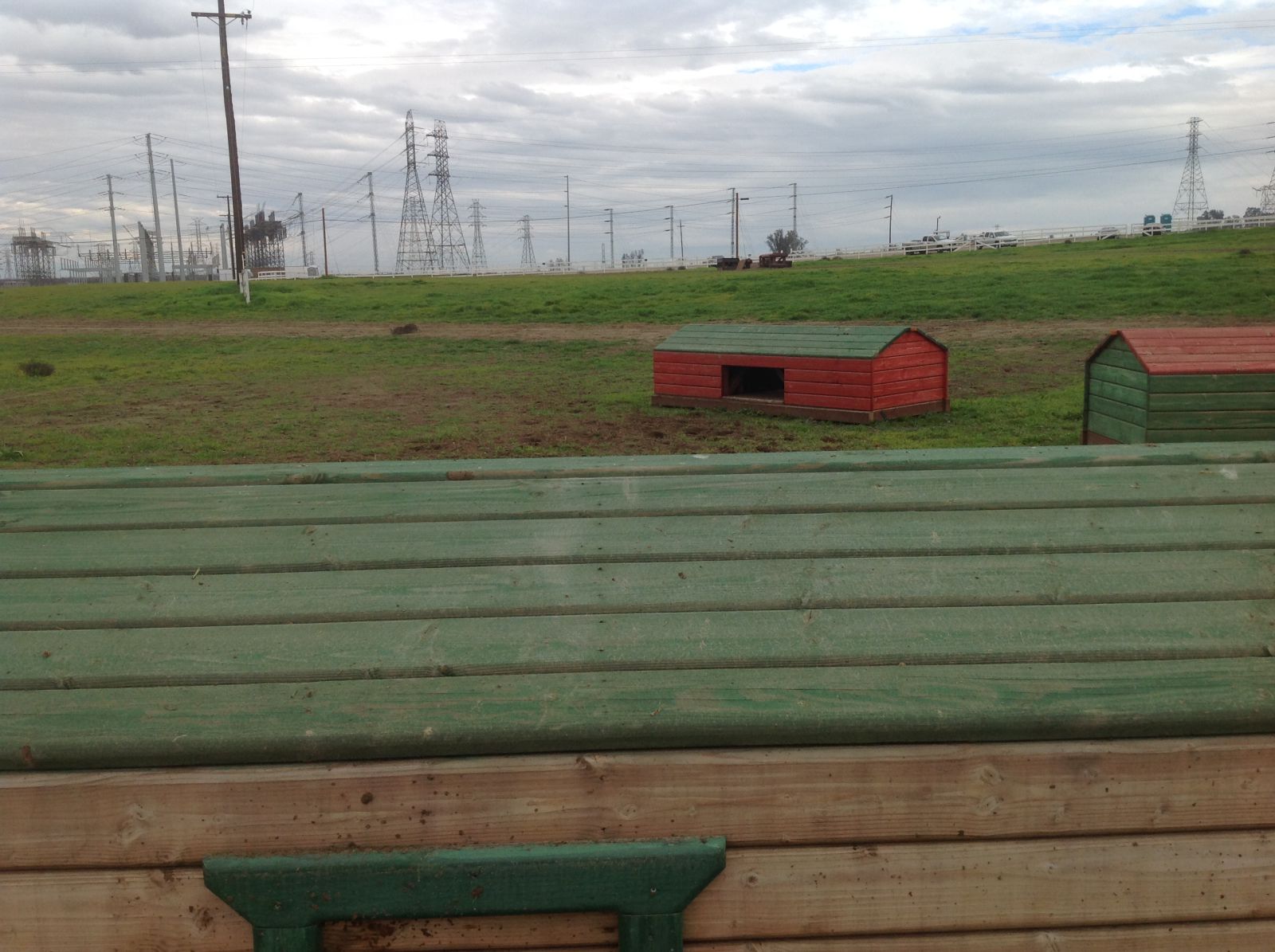 The upper level groups then went on up the long hill to the area where there were several ditch combinations – an open ditch, a log to a ditch, and a log to a ditch to a chevron. They also schooled some big galloping jumps, like a trakehner at the top of a hill, and a ditch and wall. And finally, they finished with going through 2 other water complexes. The first was a log on a mound, down into the water, with a straight line to a fish in the water (as opposed to a fish out of water… har, har), and a coop into the water to a corner out. 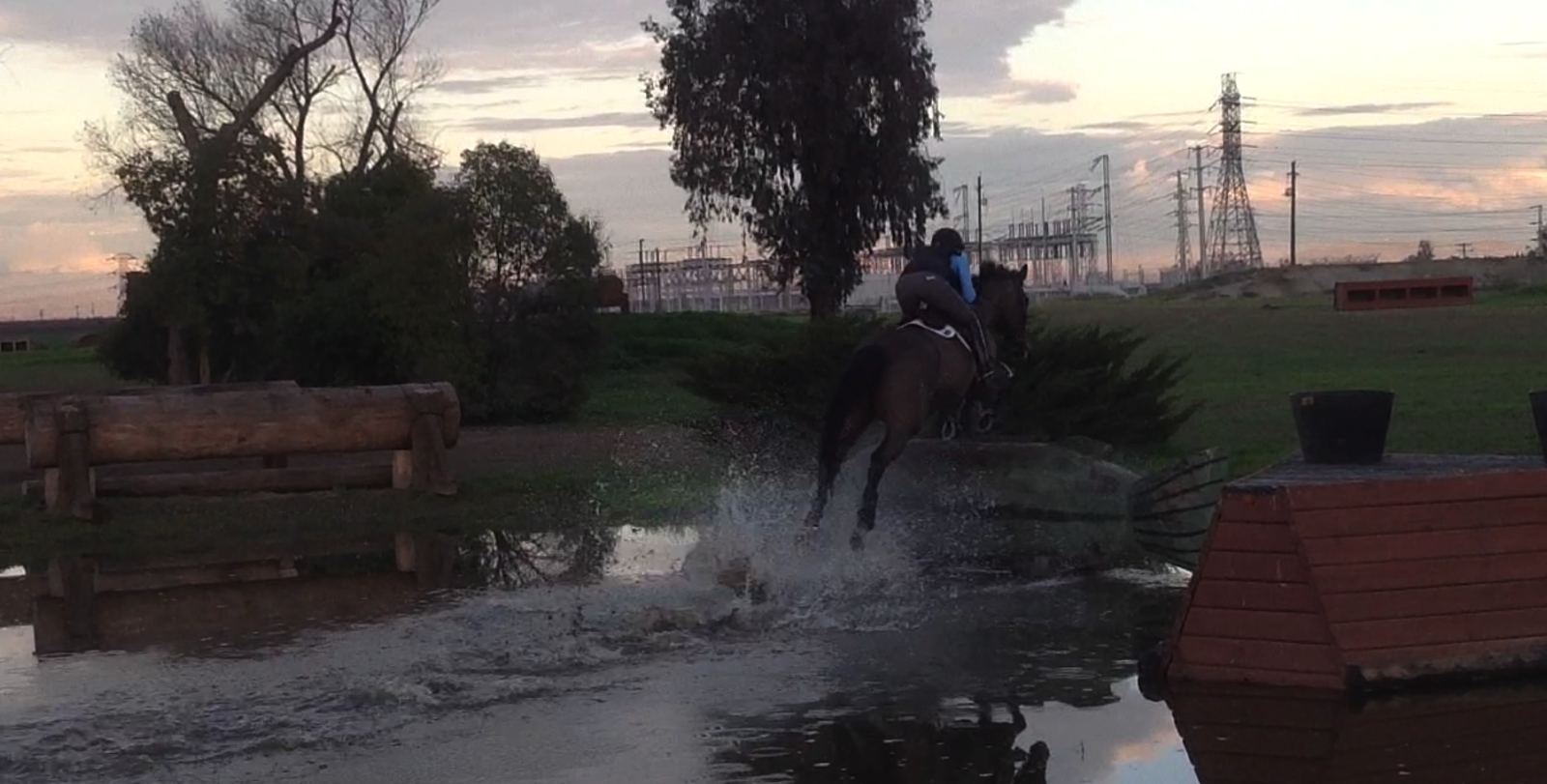 Here is a fun video of a great horse and rider team tackling the exercises in the first little play area. And it gives you a better idea of the terrain that was involved with all of these questions:

Mark sat on a couple of horses over the course of the two days, and it was obvious which type of horse he was really drawn to. With one breedy TB he rode, he was visibly having so much fun he just kept jumping and jumping!

And he was also reunited with his lovely former Advanced mount, the TB stallion Aberjack (owned by Teresa Groesbeck), who from the looks of it, hasn’t lost any of his spirit at age 25!

While there were plenty of issues out there on cross country day, all riders finished safe, happy, and hopefully enlightened.  I really liked the way Mark always gave riders little courses to do, so that before they were asked a more difficult question they were in the groove and galloping and jumping in a rhythm. There is nothing worse when schooling cross country than coming into a tricky combination “cold.”

Mark seemed to have a goal of really showing each rider how to ride FORWARD in technical lines and combinations, as he would often ask the riders to do a line in one less stride after they had successfully negotiated it the first time. In other words, now that you have successfully jumped this question in a canter, now jump it in a bit of a gallop — giving us an insight into his level of competitiveness as well.