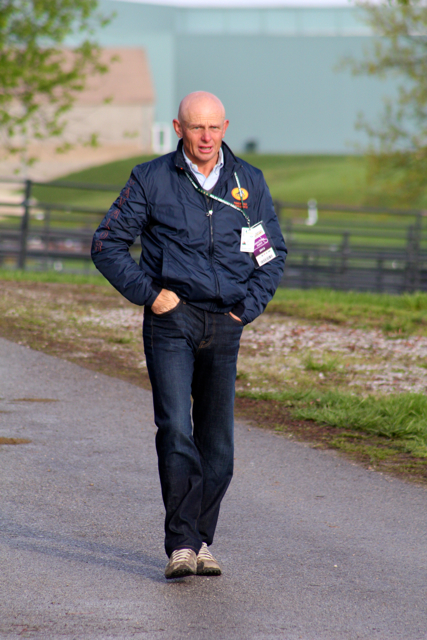 There’s much excitement in the U.S. eventing community today after last night’s announcement that Leslie Law has been named the new USEF Eventing Developing Rider Coach to oversee the Eventing 25 and Eventing 18 programs.

In this new role, Leslie will spend about 30 days per year coaching the riders named to these programs at both training sessions and competitions, as well as make himself available for private lessons and coaching.

“After riding, my passion is teaching, and helping people is what I really enjoy,” Leslie said. “There’s a really good program going on in the U.S. right now. I would like to think I could help contribute to that with the development of these young riders.”

“This is an exciting next step for the program,” U.S. Eventing Team Coach David O’Connor said in the announcement. “Leslie brings a wealth of experience and will provide great leadership for the next generations.”

American eventing continues on in a rebuilding phase, with David now having two years of experience under his belt as the new team coach since replacing Capt. Mark Phillips in 2013. Leslie said he looks forward to working alongside David with the goal of returning the U.S. to its rightful place as an eventing powerhouse.

“David’s only been in charge for a very short period of time,” Leslie said. “It takes time for a change. From my perspective, having watched from the sidelines looking in at the program and not actually being involved, I think there’s so much good going on, and it’s heading in the right direction.”

Leslie still sees American eventing in a stage of growth and development, and he said it’s important to stay positive and realize that the new program is still being implemented as the team works to become competitive on the international stage once more.

“I think the Olympic Games (in Rio de Janeiro in 2016) might still come a little early for the U.S.,” Leslie said. “I think by Bromont at the Worlds (in 2018), I really expect to see a proper medal. The Olympics could produce medals, but by WEG, I think America will be going in as a favorite.”

Developing the Next Generation

And Leslie will play a critical role in the future direction of American eventing, as the Eventing 25 and 18 programs are intended to create a pipeline to develop the young riders who will one day represent the U.S. on international teams.

“The reason these riders have been named to the program is because they’ve shown talent; they’ve obviously produced good results,” Leslie said. “The list is ideally going to be the next generation. It’s giving the people the knowledge and experience that I’ve gained over the years to direct them in the right direction toward the senior team.”

Leslie also anticipates he will work very closely with David as they pursue the mutual goal of getting the U.S. back on the podium. “I will be wanting to have a great deal of input from him because, the way I see it, this is a pipeline to the team. It’s important that it’s a great relationship and we’re continually working together,” he said.

As for Leslie’s coaching philosophy for the Eventing 25 and Eventing 18 programs, he said he intends to go back to basics, much like David has in his work with the High Performance riders in training sessions.

“Somebody once told me that when it comes to riding, it’s not about re-inventing the wheel; it’s about good basics,” he said. “You can’t beat getting back to basics with good horsemanship and good riding, and, hopefully, that then goes on to develop good horses as well.”

The Importance of Mentoring

Additionally, Leslie hopes to serve as a mentor to these riders. “I want to be somebody they can lean on, someone they can pick up the phone and call to ask for advice on everything, from competitions to fitness,” he said.

While Leslie will spend much of his time coaching and mentoring the riders in these programs, we’ll still see him out and about competing himself, as he has five talented horses coming through the levels right now and intends to keep the ride on them.

“I’m in a very fortunate position in working together with my wife, Lesley (Grant-Law). She’s able to school my horses and train them when I’m away. Over the years, you get to where you learn to juggle a big operation, so I’m very comfortable with continuing to compete.”

And on that note, Leslie said he would like to thank Lesley for all her support and encouragement as he pursued this new coaching position. Today is their anniversary. Happy Anniversary, Leslie and Lesley!