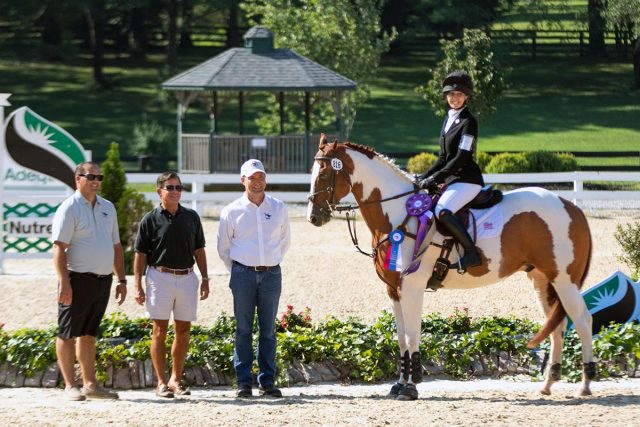 After a week at the Kentucky Horse Park in my Ride Heels Down vendor booth and hanging out with JJ, it was time for the real reason we came – competing in the USEA American Eventing Championships!

We had qualified by accident (read the story behind that here) at Beginner Novice, and after we scored a 34 on our last Training dressage test, I figured we might have a decent chance at finishing well.

Friday morning I got up extra early, headed to the horse park and threw JJ his breakfast. I had bathed him the night before and – magically – he managed to stay clean so no last-minute scrubbing was needed. I tacked him up, cut the tags off a brand new, special outfit that I had been saving just for the occasion, got dressed and got on to walk down to dressage warm-up.

JJ felt connected, had good energy and was actually somewhat listening! Coach Lauren was there for me with some great advice and helped make the most of the prep time. Soon, our number was called and we trotted right in to the main arena for our turn to be judged.

Overall, the test was good. JJ was damn steady in the bridle and soft through all the bending portions. He did take one canter step in a corner where we were supposed to be trotting, but that’s just him being super balanced and doing his typical “I want to help!” thing. I quickly brought him back down, and we got through the rest without a bobble.

When we left the arena, I wasn’t sure what to think but my coach was standing there with a HUGE smile on her face and said it was one of the best tests we had ever ridden. I was glad I had made her proud, and felt like I had ridden as best I could.

Usually I don’t like to know my score until the very end of an event, so even though Lauren said we were fab, I didn’t want to check… a few friends sent “congrats!” texts and messages which I strategically avoided, but one popped up on my phone and I saw that we had gotten a 33.5 – ack!

I had no clue where we were in the overall standings relative to the rest of the 34-horse class, but gotta say I was a bit disappointed that we scored almost exactly the same as our last Training test, despite being two levels lower. Oh well… I did my best to just “suck it up, buttercup” and moved on to the next phase of fun – cross country!

I had heard a bunch of people talking about how they had gotten lost on their XC courses, so I tried extra hard to make sure I knew where I was going. I did a course walk with Lauren and everything seemed straightforward. Since we’re used to jumping Training at this point, I knew JJ was going to rock it as long as I did my job up there.

I woke up on Saturday feeling okay. I had studied the course map and gone over it a thousand times in my head, but was still worried about getting lost. I fed, groomed, tacked up and tried (unsuccessfully) to convince myself I wasn’t nervous. Eventually, I got on and headed down to XC for my 9:54 am ride time.

Warm up went really well, and we left the start box with JJ super eager to get going. He was a little pissed that jump one was teeny tiny, and he got a light crop tap on the shoulder to warn him against any silliness, but he went easily through the first eight without any trouble at all. I had no choice about the jumps – he was taking me and we were GOING!

Meanwhile, my fear came true – I did a crap job at being the GPS. I got mixed up coming in to the first water and almost missed it completely, but finally saw it at the last second and was able to correct and get through without any issues. (Guess I shoulda walked the course a second time!)

As we were coming into the last section of the course, I checked my watch to see where we were on time. I realized – horrified – that it had not started counting down like it was supposed to. JJ had been running lightly and easily, but I know even his relaxed XC pace can still be quick, so I did a fast guesstimation and decided to hit the remaining jumps at a more collected canter type pace.

I was so relieved to hear the announcer confirm we were safe and had gone double clear as we crossed the finish line, even without my watch working! 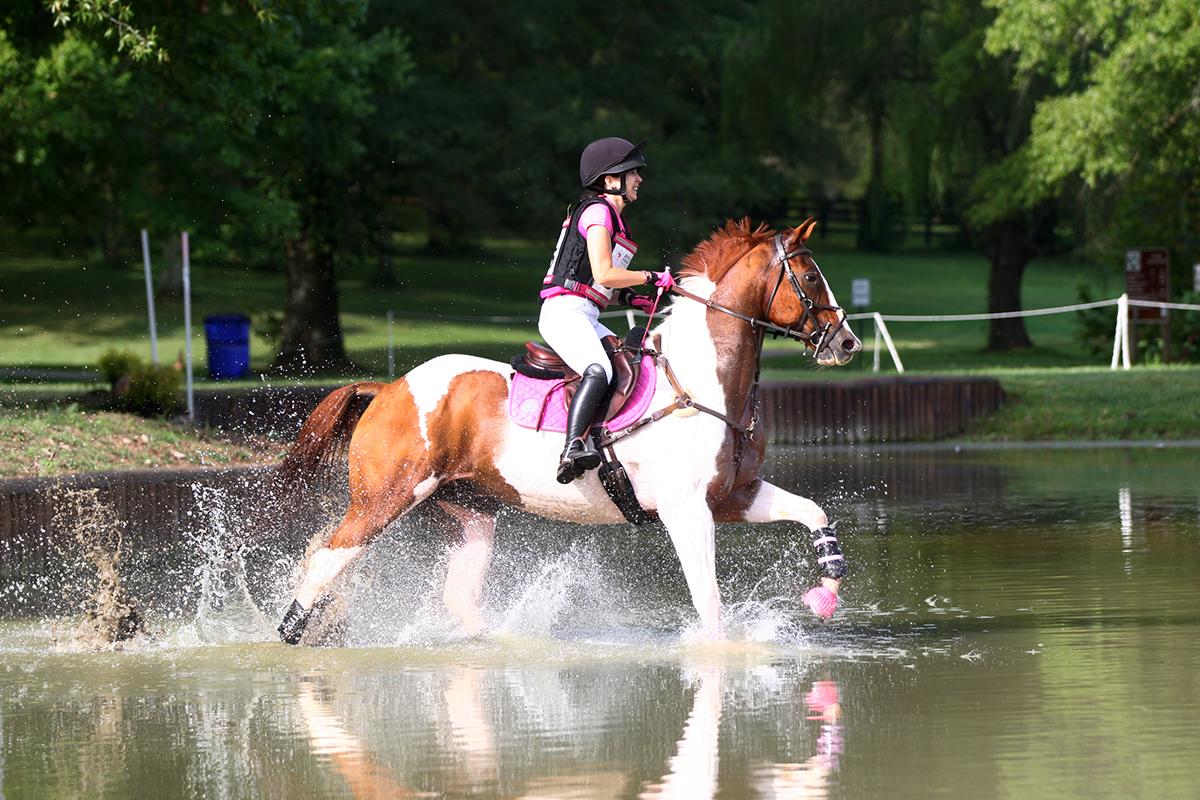 The Head of the Lake! I was having fun but JJ wanted more of a challenge. Photo courtesy Xpress Foto.

We even got to splash through the famous Head of the Lake like it was a kiddie pool, which was such a super fun experience! I tried really hard to smile for the photos, but it’s tough to mouth-breathe *and* smile. I only managed to remember to smile here because I heard my friends Carol Tresan and her daughter Devon (who gifted me a gorgeous pink bling brow band for dressage!) cheer me on as we went through. Thanks, ladies!

I guess the navigation fail and watch mishap were just the Universe’s way of giving me *something* to stress about, since the jumps themselves didn’t worry me at all. Because it’s not cross country without at least a little anxiety, right? 😉

Knowing we had earned the right to jump stadium on Sunday in the harrowed Rolex Arena, I got up extra early to make sure I had time to braid. I still had no clue where we were in the standings, but Lauren estimated when my ride time would be and I realized that, with the reverse order of go, it meant we weren’t sucking. The pressure was on!

Going in to warm-up, I was still oblivious of our place. Lauren was in charge of managing my time and I’m so grateful that she did a perfect job of warming us up. When we moved to the second warm-up arena right before we headed into the ring, I saw my number on the board and realized we were 12th. Wow!

Finally, it was go time. We trotted in to the massive arena and JJ was like “WHAT IS ALL OF THIS?!” I was like, “It’s stadium jumping, that’s all.” Then he passed a sunflower jump and was like “OHMYGOD NO,” and I was like, “You better get over it quick, because you’re going to have to literally get over it in about a minute.” 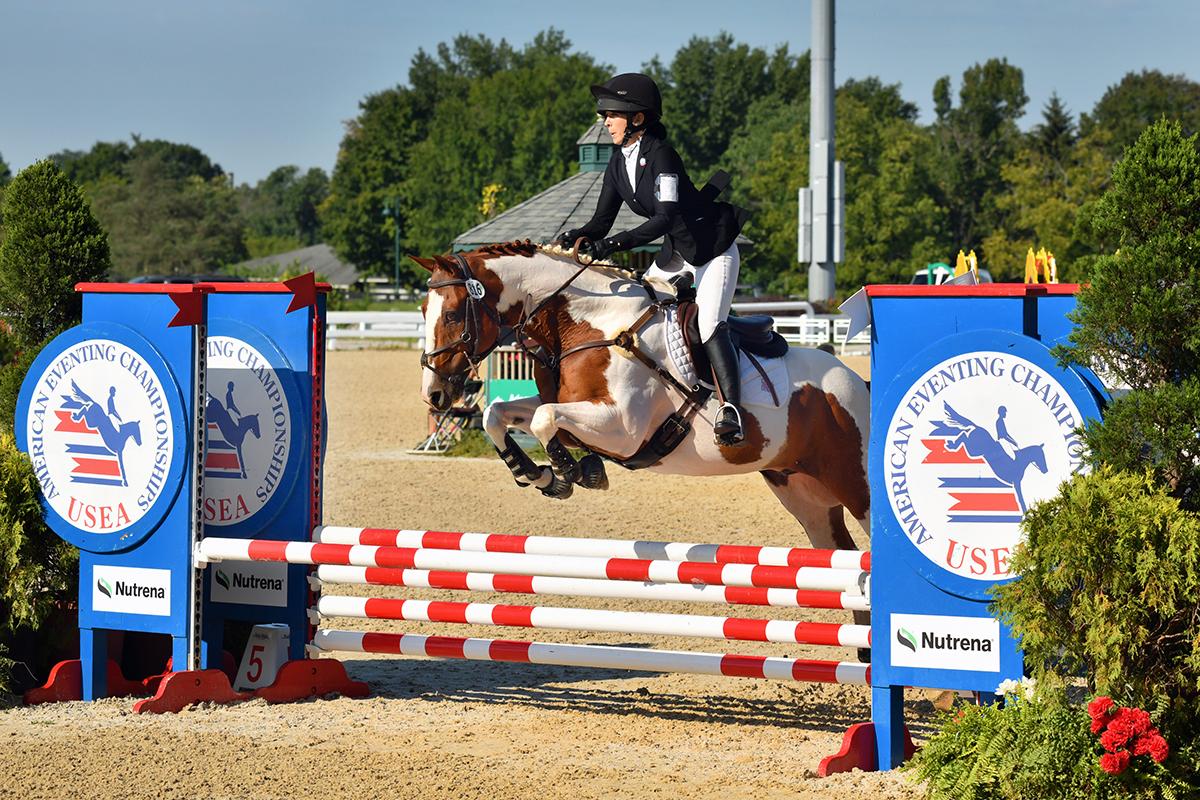 Nice and tidy with those knees, he did his job flawlessly. Photo courtesy Xpress Foto.

Waiting on the final results was actually a huge relief. We had finished, and I had survived without falling off. I never wish a rail on anyone, but it was really exciting as my friend Brooke Webb from The Vista kept me updated on the placings as we moved up, Up, UP!

The course and jumps weren’t a challenge for us, but the atmosphere added difficulty. It wasn’t pretty, and it was actually a lot tougher than I expected with so many things to look at, but I am so proud to say that JJ put his little game face on and, despite all the distractions, we finished double clear!

Ultimately, JJ and I finished 7th of 34 entries in the Beginner Novice Amateur division, ending on our dressage score which sure felt like a win to me! We got an absolutely gorgeous purple ribbon for our efforts, enjoyed a quick photo session and did a victory gallop with the rest of our group. FUN!!

I had signed up to ride in the Adult Team Challenge, too, because why the heck not? Later that day after the results were in, I was amazed to see my Area III group, the Belles On The Bit, had finished 2nd out of 14! JJ had left earlier with Lauren (no point in them waiting around) so I hustled back down to the Rolex Arena for the ATC awards presentation and got an awesome neck ribbon (my first) and a great goodie bag… and then I did the victory gallop *on foot* with the rest of my team and their horses.

I was absolutely EXHAUSTED by the time it was all over, but it had been 100% worth it to be able to take home a Top Ten finish at my first AEC. Vending and competing was tough, but thanks to my trainer, Lauren, my team and to my husband, Erik, who made sure JJ got lots of hand-walking and grazing time, it was manageable. Lauren’s coaching was critical to our success, and I am so grateful to her for helping us be able to finish as well as we did.

Throughout the week, so many great people stopped by my booth and I made a bunch of awesome new friends. I really enjoy meeting and cheering on the other riders, and I’m thankful to everyone who came by to support me as well. And, of course, the biggest thank you goes to the United States Eventing Association and all its sponsors for a truly memorable event!

(For those interested, we had been 16th after dressage, 12th after cross country, and 7th after stadium – a move up of nine places!)

If you have the chance to go to the AEC, do it!! It doesn’t matter what level you’re at – just getting there in itself is a huge accomplishment. Also, don’t do the victory gallop on foot. I’m still out of breath!