As 2015 comes to a close, EN guest writer Laine Ashker reflects on her season and completing the biggest event of her career: The Land Rover Burghley Horse Trials. Many thanks to Laine for writing, and don't forget to follow her on Instagram. 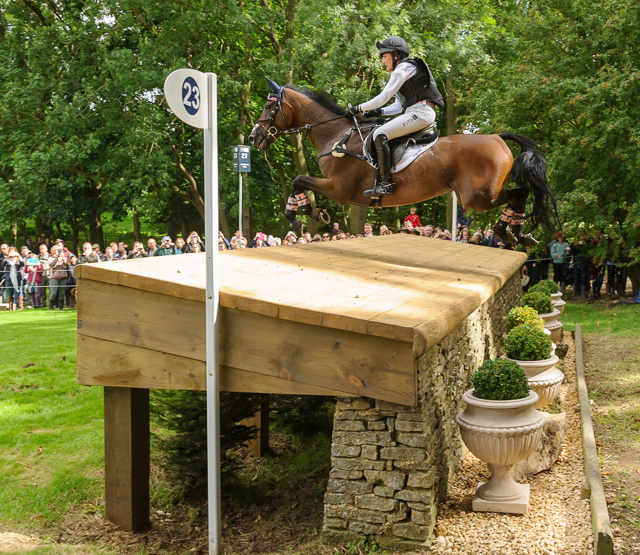 The flight from London Heathrow to Richmond via Atlanta is a total travel time of around 10 or 11 hours. However, the long journey home from Burghley for me seemed to last for days. Even when I stepped inside my quaint and happy apartment greeted by two extremely needy lovebirds and laid my head on my very own pillow, my heart was still in England, resting high atop the Cottesmore Leap, which is also said to be the highest point on the formidable four-star course.

Truth be told, my initial sentiments about my performance with Anthony Patch after Burghley did not agree with my otherwise positive outlook on life. I felt like a failure. I felt like I let everyone down. I felt like a dog retreating with his tail between his legs after losing a tussle with a neighboring beastly canine. I didn’t allow myself to acknowledge the fact that I had just completed the world’s biggest four-star event and with a sound 16-year-old off-track Thoroughbred.

Now that the dust has settled and “time and sunshine” have worked their magic, I have been able to reflect on my unforgettable international experience with a clear head. Suddenly, an influx of feelings rush in, ranging from tears, laughter, nausea and, most surprisingly, inner peace. And, strangely enough, I immediately have a change of heart. Burghley was everything I dreamed about and more. Funny how one’s outlook can change once you start to get out of your own way! 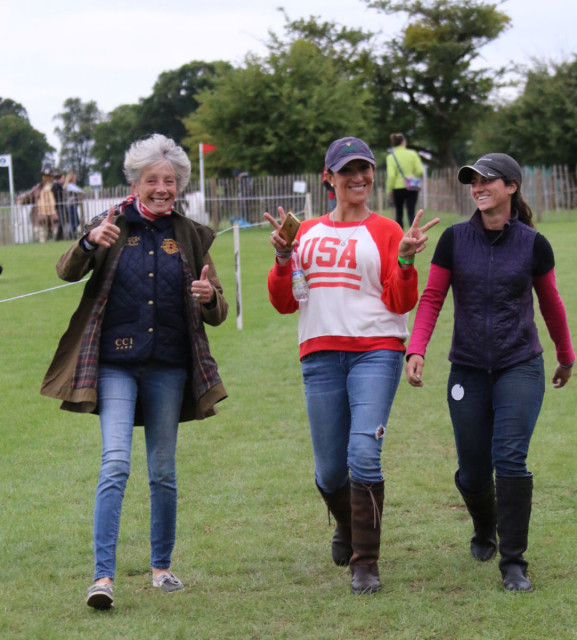 Riding at Burghley was one helluva surreal experience. On top of attracting crowds in the tens of thousands, the most unique part of Burghley was probably what occurred away from the bustling shopaholic crowds. The barn area was unlike any other. In contrast to Rolex, Burghley stables all of the riders together regardless of their nationality, which for wide-eyed Americans like myself was probably the coolest aspect of the event.

Every day as Al and I came back from our early morning walk, we were greeted by our famous stablemates, such as Sir Mark Todd, Jock Paget, Jonelle and Tim Price, Michael Jung and Dag Albert. For me this, is what made Burghley so unforgettable: just to hang out in the barn area tossing around ideas with literal living legends who were as down to earth and kind as any regular joe.

It was so reassuring to ask the riders about their past Burghley performances, get clues on how the course rides and last-minute tips about proper British eventing etiquette. (Note to self: It’s not considered courteous to run over the man with the microphone trying to interview you immediately following dressage … ahem, AL!)

Never have I been to an event where I have felt so welcome, and despite all of its prestige, it was surprising and enjoyable to experience the laid-back atmosphere in the barns. Word on the Burghley street (and throughout the loud speakers) was that Al and I were fondly called “America’s Eventing Sweethearts,” which was bestowed upon us by British announcer and four-star eventer Spencer Sturmey.

Outside of the barn, however, was anything but tranquil. From sun up to sun down, the Burghley trade fair moonlighted as an American shopping mall on the night of Christmas Eve with its increasing number of crowds. And, of course, there was the stunning Burghley mansion that stands proudly overlooking the show grounds in all its wonder that never failed to give me goosebumps every time I hacked past it. 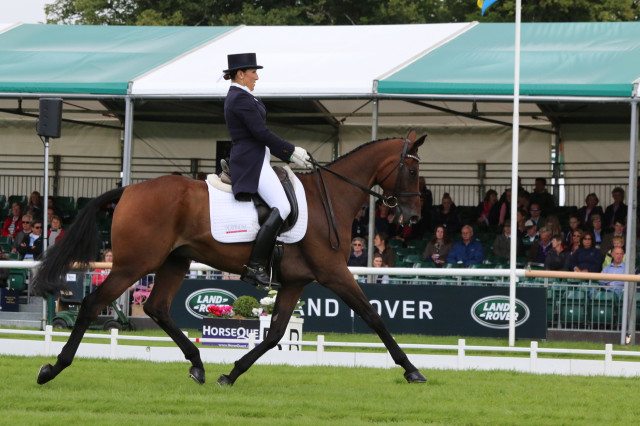 Laine Ashker and Anthony Patch strutting their stuff in the Burghley arena. Photo by Samantha Clark.

But aside from that busy trade fair and the stately palace, probably the biggest part of Burghley was its colossal cross country course! Never have I seen ditches as deep, oxers as tall and wide, and technical questions that at first sight seemed impossible all in one course. Top that off with thousands of people lining the galloping lane to catch a glimpse of the world’s best riders tackle such a demanding course — well, my friends, this is officially the big league!

I remember before leaving for England having phone conversations with my dear friends Sinead Halpin and Hannah Sue Burnett, who both conquered that cross country course in years past. One thing that both ladies asserted was to never depend on anything outside of the gallop lane to use as a guage to line up a technical question because most likely a massive crowd would be blocking it from my view. In other words, there are crowds, and then there are Burghley crowds.

Probably my best piece of advice came from my longtime coach Buck Davidson. I remember calling him late Friday night in a panic before cross country the next day hoping he could muster some wise words to set my mind at ease so I could get some sleep. In typical Buck form, he did not disappoint.

The next morning I gave Al a light breeze and walked my course alongside my security blanket (AKA my mom) when Buck’s instructions began to take shape. He told me to watch some of my favorite riders (Fox-Pitt, Jung, Funnell, Townend, etc.) and count how many strides each one got between fence one and fence two.

Initially I had no idea about the concept behind Buck’s logic — being that the first two fences had no related distance — until he explained to me that counting strides between the first two fences of the people who were successful around the whole course literally showed the pace that he or she was on when setting out on the course.

The average number of strides between the first and second jumps was an attacking sixteen. Not only did I now know the pace that was expected to successfully complete a course like this, but I also now comprehended the precedent these top riders were setting early on in cross country. I will never forget this advice for as long as I live, and I truly think Buck’s wisdom helped me complete a course I thought to be impossible just two days prior.

I bet you would like to know how many strides I got from one to two. All I can say is I never expected the sudden rush of confidence as Al launched over the massive white table on the sixteenth stride. Despite the two green bobbles on course, Al and I managed to proudly carry our beloved Stars and Stripes through the finish flags. And just like the Grinch who stole Christmas, our hearts grew three times larger that day.

Now anyone who knows me knows that I am a fierce competitor. I have trained under the most amazing athletes in the sport, and I have been fortunate enough to have known the sweet taste of success a handful of times to make me yearn for it even more. But when we galloped across the finish line, I felt a huge sense of accomplishment.

Don’t get me wrong — I still don’t think having two refusals on any course is acceptable, nor should it be deemed a huge success. However, being that my initial goal was to finish my first overseas four-star, I am both relieved and proud to have punched yet another four-star notch in my (C4) belt.

This leads me to the most important thing that I learned while competing at Burghley. I am finally able to grasp the difference between myself and the riders who I aspire to be like. While walking the cross country Friday afternoon, my mom watched as different groups of riders discussed how to tackle the difficult lines at the Trout Hatchery. What she noticed was the differing levels of confidence demonstrated in one simple question each of the riers posed to themselves.

In simpler terms, the world’s top riders are just more competitive than I am. I know it’s not like this is breaking news, but it was really earth shattering to witness this world-dominating competitiveness firsthand, rather than just watching it over a live stream back home.

Now that I have managed to unearth my proverbial tail from my rear, I have taken this priceless experience and turned it into fiery motivation. Turns out I was totally correct in aligning my goals with simply just completing my first international four-star. And the next time I burst out of the start box, I will have the extra confidence from having already completed the world’s toughest four-star course in a foreign country and without my coach physically by my side.

Experience is key, and in my opinion is far more important than any amount of lessons, tack or talented horses money can buy. Want to know how to beat the Europeans? Compete against them as often as you can.

I want to take the time to express my gratitude to some very important people. First and foremost, to my groom Lauren Sherrill, who earned her first international stamp in her passport as she traveled alongside Al all around the European countryside and made him look like the winner I believe him to be.

To my amazing mom and dad, to my dad’s wife Kathi and my two very special friends Celia Rafalko and Rick Sample, who made the long journey to cross the pond to watch Al and I in our Burghley debut.

To my coach Buck, who literally prepped me for Burghley in three days.

Lastly, and probably the most paramount of all, I want to thank each and every one of you who supported us financially, spread the word to help me fundraise or simply followed our journey as we completed our fourth four-star event. I want you to know that this experience is not taken for granted, and I intend to capitalize on the wealth of information that I gained over those unforgettable 10 days in early September.

Until then, folks, sit back, relax and enjoy a hot cup of cocoa surrounded by family, friends and furry ponies. In less than a week 2016 is upon us, and I couldn’t be more ready to show her who’s boss!