Ainsley Jacobs is an adult amateur based out of Atlanta, Georgia. She started riding huntseat equitation when she was eight, and has tried practically every discipline since then. In 2014, Ainsley discovered eventing and it changed her life! She purchased her first horse, JJ Spot, in February 2016 and chronicles their successes (and struggles) of learning to overcome literal and figurative obstacles in her blog at www.RideHeelsDown.com. JJ has been rehabbing from a ligament injury for a few months, so during his layoff time Ainsley is revisiting earlier lessons in her experience. Today’s story is from March 2015. 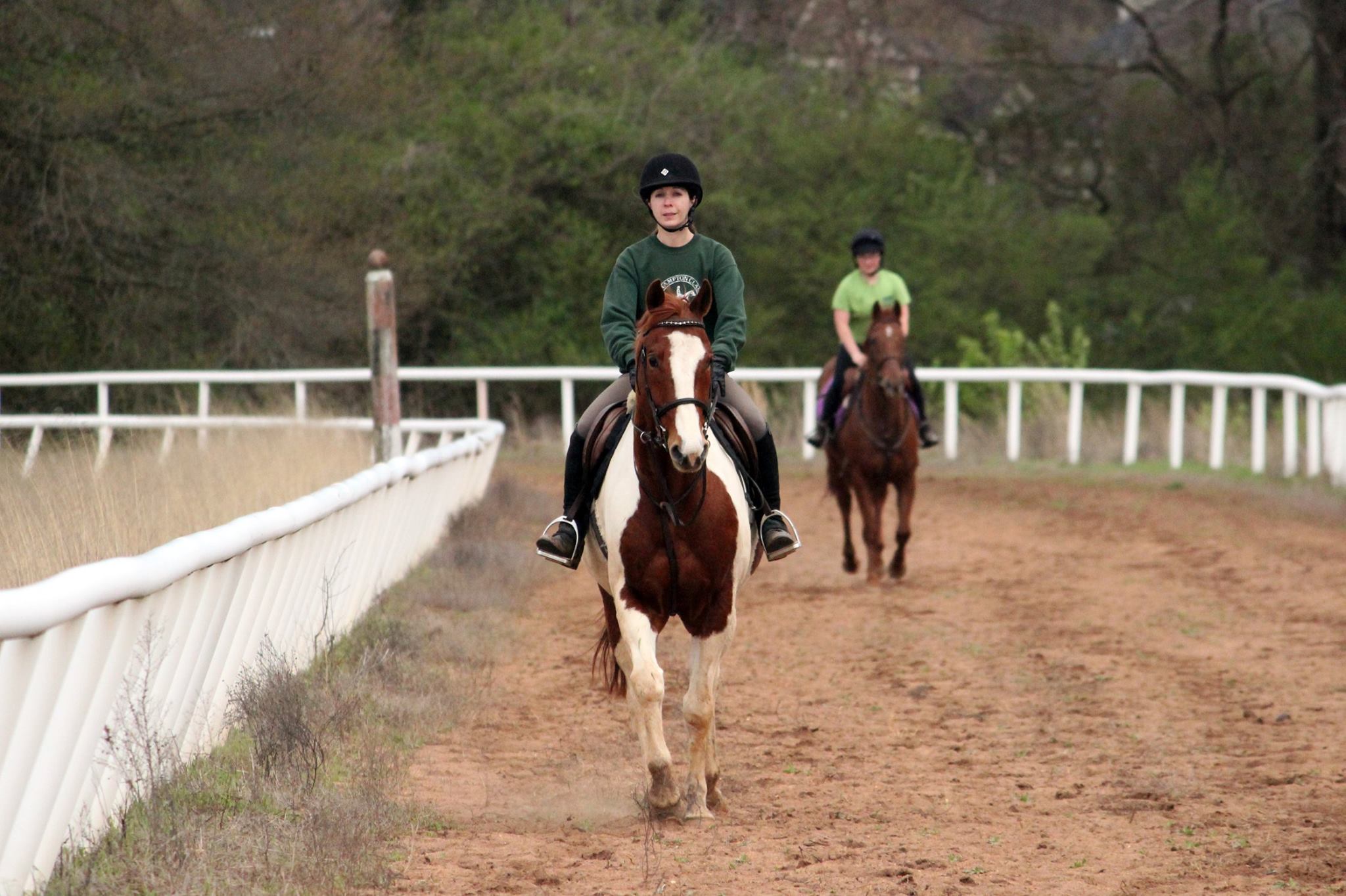 Riding on a race track was such a cool experience! Photo by Erik Jacobs/P.TEN Marketing

We’ve been eventing for a few months now, and slowly but steadily it’s getting easier. I hope I didn’t just jinx myself by saying that!

For our next event, we went somewhere new – North Atlanta Equestrian. It was a little far from our barn, so we reserved some stalls and trailered up the day before. Since it was a Combined Training event and not a 3-phase, there was no cross country course to school.

Instead, as North Atlanta Equestrian is situated on an old Thoroughbred breeding and training facility, we went out and had some fun on the race track! I’d never ridden on a track before, and it was such an amazing experience. I’m still getting to know JJ, and wasn’t really comfortable with the idea of letting him run flat out since I wasn’t sure how he’d react. Instead, I wussed out and settled for a mild hand gallop… but it was still a blast.

That night, we got some dinner, then had a team slumber party in an incredible bed and breakfast on the property. The house was full of such amazing memorabilia and pieces of racing history – I felt like we were staying IN a movie!

The next morning we woke up and walked down to the barn to feed and get the horses ready for another day of showing. It was REALLY windy out, and while JJ usually isn’t spooky, he can be pretty frisky. That said, we actually had our worst dressage test to date. One of our canter departs included a buck, which the judge kindly noted as merely an “exuberant transition.” We wound up with a 48.50 on Beginner Novice Test B – ugh. 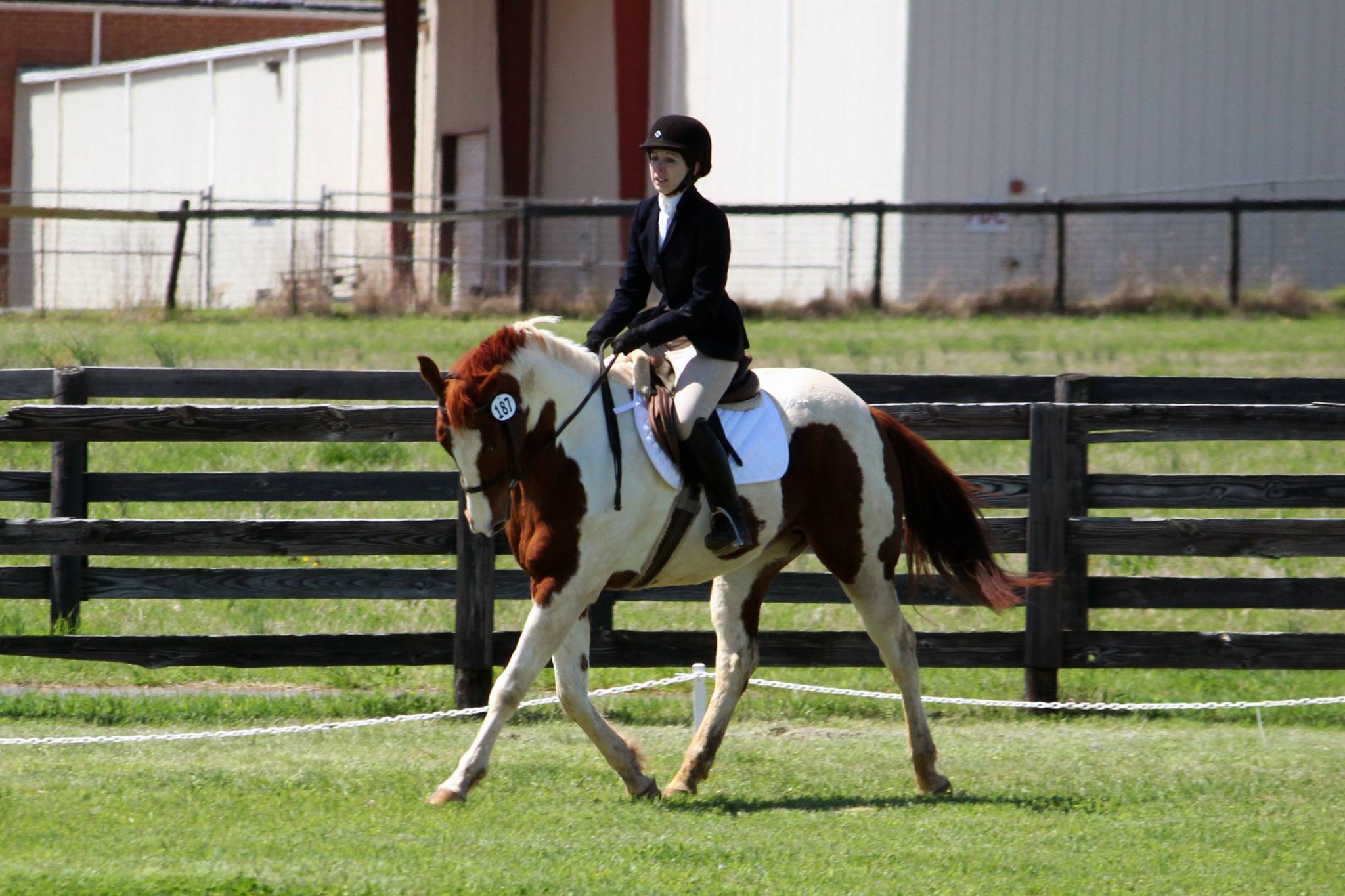 A touch behind the vertical, but overall we had some REALLY lovely moments of trot. Photo by Erik Jacobs/P.TEN Marketing

For the second portion of the event, the arena had been set with stadium jumps and an adjacent grass arena was set with a few cross country-esque jumps. For the first time, we got to jump INTO and OUT OF an arena as part of our course, and it was so cool! JJ put in his usual perfect round, and we were double clear yet again.

We finished on our dressage score, and went home with a pretty white ribbon for fourth place. I had opted in for a second jump-only round, and we took fifth in that.

Looking back now, I really wish I had let JJ run his heart out on that track…