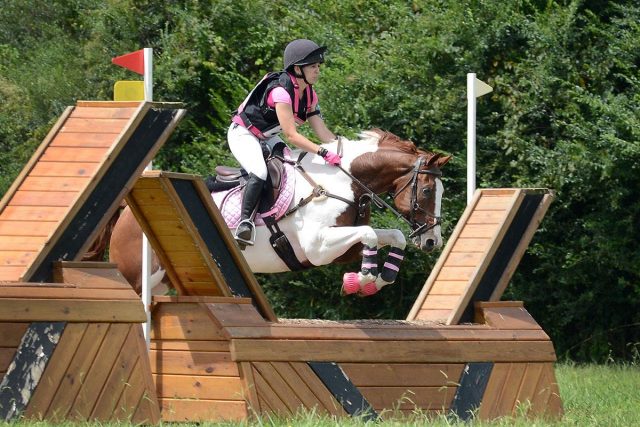 When I unintentionally qualified for the USEA Area III Championships and then did well there, too, I decided to finish out the trifecta and try for a third score so that I would be eligible for a GDCTA year-end award and hopefully also earn a USEA Blue Ribbon.

There was only one show left that fit my schedule and met the timeline requirements. Beginner Novice has been easy for us for a while now (famous last words?) and I know JJ is getting bored with it, so I signed up for what I hoped would be my final Beginner Novice event at Chattahoochee Hills.

The two weeks prior to the event, due to work travel and other life-responsibility-type things, I was only able to get in two jump lessons and no other rides. I wasn’t feeling particularly prepared to do well, especially since we hadn’t done a flat/dressage ride in over three weeks, but I didn’t care since I was just going to have fun and my only goal was to (try to) finish on a number. I was also going completely on my own, with no coach and no husband, and basically just wanted to survive and finish with a happy, sound horse.

The Friday before the show, I went to pick up my trailer and get JJ loaded. Much to my dismay, the infamous tire that caused me to have to go to urgent care at my last event, was low on air yet again. (I had taken it two weeks earlier to have a leaky valve stem replaced as I couldn’t see any punctures and assumed that was what was causing it to slowly deflate… apparently, there was *also* a puncture. Ugh.) Fortunately, I had left myself plenty of time in my day and was able to quickly hitch up and drag it to a nearby tire shop to have it completely replaced.

An hour later, I returned to Beaumont Farm, got JJ loaded, and headed out for what was only my second time trailering, ever. I’m proud to announce we both survived no worse for the wear, despite 1.5 hours of travel time and Atlanta’s crazy highway drivers. We unloaded at Chatt, got settled, and went for a ride since I hadn’t sat on him since Tuesday.

To say JJ was “spicy” would be an understatement. He was so pumped that I could barely ride him. It was frustrating, sure, but I would much rather have that kind of a ride before the show than during it. A few people who know him were surprised by how he was acting, but I tried not to let it get to me.

Saturday was a new day and a new start. When I tacked up for dressage, JJ seemed a lot more relaxed. His work in warmup was completely opposite of what it had been the day before – he was calm, he was soft, he was lovely. It was also hot as hell out, and I didn’t want to overwork him since he was being SO good already, so we cruised into the arena with only a little bit of prep.

As we were circling to await our entrance at A, JJ spotted a horse on the XC course in the distance. His little ears pricked and I sadly told him, no, not yet buddy. As we headed down the center line, I could tell he was pissed. My willing partner vaporized and JJ said “screw you, mom, and also I AM A GIRAFFE.” It was bad, yeah. We had a couple moments of decency, but it was not our finest work. Oh well, a sand dancer he is not.

Later, for stadium, he was in a better mood since he could now do what he loved – jump the sticks. He gave me a perfect warmup and a perfect course, got all his leads and didn’t knock a single rail. It felt more like a hunter round than an event horse round, and when we crossed the finish, the announcer said we had gotten +1 penalties for time. Wait, WHAT?! For the first time in four years together my little speed demon horse had gone too SLOW! I couldn’t even believe it!

With only one phase left, Sunday was shaping up to be a lot of fun. I took a little nap in JJ’s stall after lunch and he snoozed next to me, then we got geared up to go. He didn’t seem to want to go down to XC which was odd, but once we had arrived for warmup he was back to normal and listened quite well to my aids. We were called to the start box, received our countdown, and off we went!

The first three jumps went unusually well. JJ had a good pace and was fairly quiet. After the fourth, though, I think he realized we were on an actual course and not just schooling and he kicked in and RAN! I let him have a few little sprints here and there, but we also had our usual discussions about balance and paying attention to mom before each jump. Overall, it was a lot of fun and one of our easiest XC courses together – we finished double clear.

The moment we crossed the finish line was really cool, because I got the validation that I had achieved what I had set out to do. We officially finished on a number and not a letter (although I didn’t know our placing because I had avoided looking so as to not psych myself out) and got our third and final GDCTA qualifying score. AND I had done it all on on my own.

After cooling out JJ and packing up my stall, I waited for the results to be finalized and stopped at the show office before heading home. Incredibly, when I looked at the results, I saw we had finished SECOND! (And first was rightfully won by my wonderful friend, Beth Clymer, and her handsome horse, Andy!) Even with our atrocious dressage, JJ and I had done it – we got our third “first through third finish at the same level within the same year” and earned our USEA BN Blue Ribbon. (JJ abandoned me for our selfie!) No coach this weekend but I never once felt like I was “alone” thanks to all my wonderfully supportive friends that were there, too. And a special thank you goes out to MF Eventing for letting me be an honorary MFer and stable with them! (Photo by Ainsley Jacobs / Ride Heels Down)

Although I was flying solo this weekend with no coach, I never once felt like I was “alone” thanks to all my wonderfully supportive friends that were there, too. And a special thank you goes out to the amazing Lindsay Barrack of MF Eventing for letting me be an honorary MFer and stable with her and her girls!

When I was in Florida earlier this year, Jeanie Clarke told me “you and JJ have no business being in Beginner Novice anymore” and, honestly, I think she was right.

I’ve learned so many great lessons over the years having fun in Beginner Novice, but it’s time to push myself so and move on.