Justine Dutton — the “other Dutton” — completed her first CCI3* with Jollybo, an 11-year-old British Sport Horse mare owned by Sport Ponies UK , this past weekend at the Jersey Fresh International Three-Day Event. She kindly wrote a blog for EN reflecting on the experience. 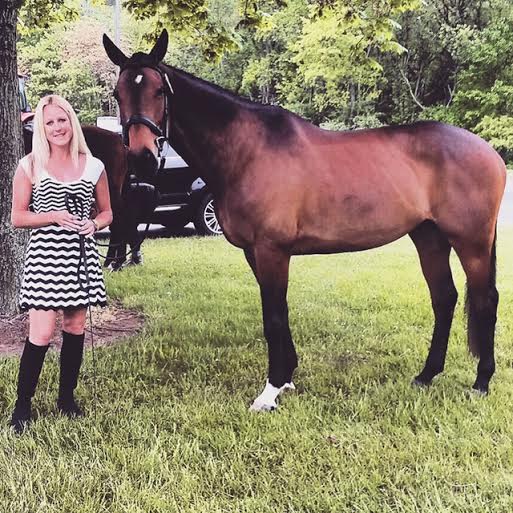 I’m pretty honoured (perplexed) that EN wanted me to write a second part to my blog; I initially wanted to name part two “How to Play Pick Up Sticks Like a Boss” but they nixed that pretty quickly! After 48 hours to beat myself up, tear apart and analyze every intricate detail of my performance, I am actually ready to be subjective and share my thoughts and feelings.

Don’t get me wrong, completing my first three-star was a massive achievement for both me and Jollybo and one which I am thrilled and proud of. However, as an athlete (and someone that wants to be perfect as you learned in my last blog), I find myself quite disappointed in parts of my performance and just completing wasn’t good enough for me.

I want to be great, not just good enough — I remember last year at some point my Buck Davidson said to me something along the lines of “seventh is fine, but aren’t you tired of coming seventh?” That stuck with me. I am not a person that will settle for a sub-par performance. I want to be able to execute in the  ring as I have at home — OK, perhaps a little unrealistic, but I know it’s possible.

I spoke to my good friend and one of my biggest supporters, Jill Henneberg, after this weekend, and she told me she was glad I wasn’t satisfied with it being “good enough” and that riders will only get better by expecting more of themselves and not being OK with just being “OK.”

With that being said, I took away so many positives from my week at Jersey, and 48 hours later I am able to not let my poor show jumping performance over shadow all that I got out of it.

Dressage was alright — I know it could have been better, and I know my nerves and tension contributed to the tension my horse carried. I had a 5 p.m. dressage time and rode Jollybo in the morning, where she was quite excellent. I have never ridden her earlier in the day before my test, but I have also never had a 5 p.m. ride time either, so this was a new thing.

In hindsight, I think I got my better work during my first ride and had a little bit of a less responsive horse because of it. Jollybo isn’t typically a hot horse, and she doesn’t really get distracted, so in retrospect perhaps next time I would just hack her instead of school her earlier on. However, I hit my goal of a 55 or less (well 55.3 about did it) so was fairly satisfied. I know we can be better though, and I will be working very hard for the rest of the year in this phase.

Cross country was, quite frankly, huge and formidable. Technically there wasn’t anything on there we couldn’t do, but seeing it all together on a 10-minute long course was definitely intimidating; when the course builder agrees with you and says, “Yep, that’s a $%#@ big ditch and wall, don’t miss!” you know you’d better get it right. 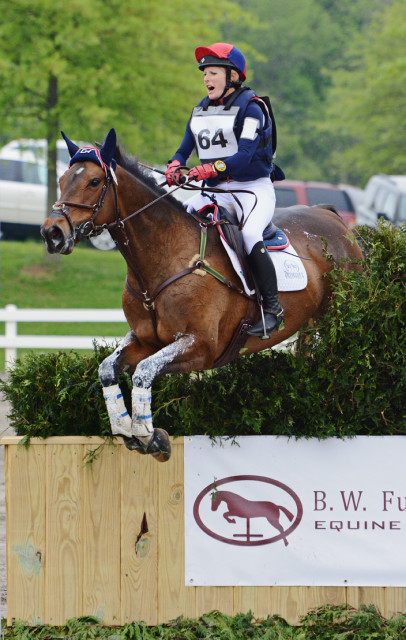 Justine Dutton and Jollybo through the combination in the main arena. Photo by Jenni Autry.

The combination in the arena was definitely of some concern, and the water was a bit complicated amongst many other combinations, so I had plenty to be worried about. The day of cross country, I was my normal, freaked-out self. When the time came to leave the start box, Jolly was VERY ready to go. I took a breath and just told myself to ride like I know how and do everything that Buck ever told me.

My little pony jumped around like a seasoned pro! I don’t think I had one bad jump, and she was honest, straight and quite frankly impressive (to me at least) through every single combination. As you know, I’ve struggled with her being a bit strong on me and was pleasantly surprised when she became really rideable about halfway through the course, and I could actually kick her and let her gallop.

However, about a quarter from the end, she got her second wind and literally grabbed the bit and ran off with me down the hill heading towards a combination coming out of the woods. After that, I didn’t feel I could let her gallop as much as I would have wanted knowing there was a big combination at the second to last fence that had caused some trouble.

We came home clear with some time, which I was thrilled about. I learned that I have a very honest, reliable and game little cross country horse who will do anything for me, but I also learned that I need to gain a better understanding of maintaining a consistent pace and also to trust her and to not set up quite as far out — I think this will come in time.

Show jumping day she jogged up very sound and happy. I actually enjoy show jumping and typically Jollybo is a good show jumper and has never pulled more than one rail since moving up to Advanced. I definitely did not have the show jumping round I had planned — we  took down more rails than I have in my entire career!

After much analyzing and replaying each second in my mind, I think the contributing factors were that I have never show jumped her after a 10-minute cross country course, so I wasn’t sure what to expect. I struggled to find and maintain a rhythm but tried to ride all the correct numbers down the lines (I am an obsessive counter), which actually in hindsight I should not have done. Instead, I should have ridden the canter I had and gotten to the fences how I needed to and not in the numbers that weren’t there in that canter.

I think I may have used up my jumps in the warm up … maybe I am making excuses, but for me, I need to know what went wrong and how to fix it. When Jolly comes back off of vacation, I will for sure be working very hard on our show jumping and taking it to the next level that it needs to be.

Someone asked me if I was upset that this would not count as a qualifying ride. Honestly, at first I thought “qualifying for what?” until I realized she meant Rolex, which is a far away thought on the horizon right now. My immediate reaction, however, was that no, I wasn’t upset at all because the only reason I would even consider Rolex would be with an amazing qualifying ride at Fair Hill this fall.

If that didn’t happen and I had gotten a qualifying ride at Jersey, then I definitely wouldn’t be considering it because to me, I obviously wouldn’t be ready if I didn’t make the qualifying criteria at Fair Hill even if I were qualified from Jersey. I don’t want to do something just because I have managed to scrape through the qualifiers — I would want to be a thousand percent ready.

Even though the show jumping marred my weekend performance, I am still absolutely thrilled to have finished my first three-star on a little 15.2-hand mare that was doing her first Intermediate a year ago and was deemed to be “no more than a one-star horse” by a prior rider.

The support and encouragement of other riders and pros has been astounding and incredible and humbling; I can’t even count how many of them took a moment to congratulate me and offer words of advice, encouragement and praise. Such is the sport of eventing — everyone is competing against themselves and everyone wants everyone else to succeed — how many other sports can you say that about?

Moving forward, Jollybo is already hating her vacation, and I am dreading the first day of getting back on her, which will be no doubt far more exciting/death-defying than the three-star cross country course we just completed. I am excited for two (maybe even three!) new English ponies to arrive from the homeland in the next week and am even more excited that Finn is well on his way to being back to full work.

My horses and I are also taking part in a fashion shoot for a designer clothing line for a national magazine which will be shot at our  farm in a couple of weeks — I can’t wait to play princess and be a model for the day!

Signing off now, if you have made it this far through my waffling (English phrase — look it up) then I applaud you!