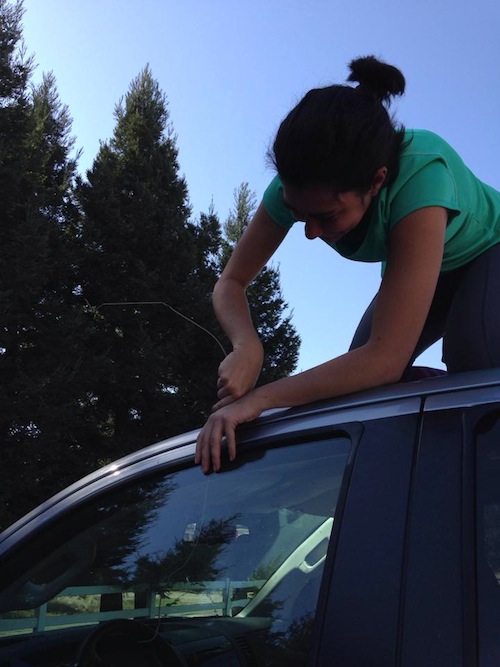 Eventers are the masters of improvisation.

Without even realizing it, you learn a lot of unique skills and how to improvise tools at the barn.  Most of the time these moments are serendipitous.  We all become masters at duct tape and baling twine repairs.  We learn to use hoof picks as hammers when adding name plates to new saddles.  We are then able to turn around and use that same hoof pick as a screw-driver or for leverage to open a stubborn bucket of supplements.

Lunge whips become extensions of our arms when something is just out of our reach.  We can transform a large twig into a crop in a pinch and demonstrate unequaled creativity when it comes to making spooky jumps out of various finds around the barn.  Tetris Champions would quake in their boots upon seeing our efficiently-packed trailers pre-horse show.

Many skills come our way at the barn but the most useful skill I learned out of perceived necessity was how to break in to my own car.  There is nothing more frustrating than being alone at the barn and discovering you’ve locked your keys in your car.  The first time this happened I quickly realized that I never wanted to repeat the experience.  Shortly afterward I sat down and figured out how to pop the locks on my own car.  Learning how to break in seemed more logical to me at 17 years old than the reasonable course of action – leaving a spare car key in my tack trunk.

I only ever had to pop the locks on my car one other time after figuring out how, but I was happy to show Stephanie the technique the other weekend when she locked herself out of her truck.  We spent about two hours with an unwound wire coat-hanger alternating between trying to pull the latch back and stabbing at the power-lock button.

We were determined to get it open on our own.  It was possible.  It was just within reach.  We just had to keep trying.  As I was digging through the tack-room for some additional tools, the farrier offered us some wedge pads to help us on our quest.  Stephanie and I took turns being the spotter.  We continued to make no progress.

After another thirty-minutes we threw our hands up in the air.  We were defeated.  After much gnashing of teeth, we called AAA.  The operator told Stephanie that it would be about an hour before the tow-truck arrived, so we lounged about in the shade looking at horses on CANTER as well as photos of some of our old friends who still ride Hunters.

The tow-truck driver arrived right on time and within a few minutes had an “almost-got-it”  moment that startled us all.  Stephanie’s truck apparently has a fierce anti-theft system which set off the horn, re-locked the locks and almost made me pee myself in fright.  Had we actually managed to get the lock while one of us was sitting on the roof, there probably would have been a fall.  So much for me expecting knowledge I gained on a 1987 Chevy Blazer to still be valid on a 2013 Toyota.  After two more almost-got-its the tow-truck driver was able to get Stephanie’s door open. There was much celebration.

Driving home I found myself swinging by the local hardware store to have a spare key for my car made.  Much like horses, cars aren’t always the same.  Things change.  What worked on your first pony isn’t necessarily going to work on the fancy sport horse you own as an adult and sometimes you really do need to ask for help instead of fumbling along.  You don’t always have to go about things like the hooligan you were as a teenager.

Now if I can just remember to actually put the spare key in my tack-trunk, I may just have learned something.