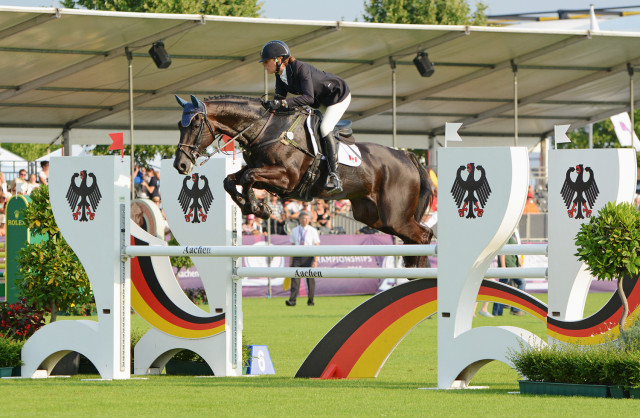 Kathryn Robinson and Let It Bee at Aachen 2015. Photo by Jenni Autry.

We are devastated to report that Let It Bee collapsed and died between fences on the Advanced cross country course today at Burnham Market International Horse Trials in Norfolk, England. British-based Canadian rider Kathryn Robinson was uninjured in the incident.

Musketeer Event Management released the following statement: “It is with great sadness that we announce that number 860, Let It Bee ridden and owned by Kathryn Robinson, died whilst competing in the Advanced class at approximately 5pm at Burnham Market International in Norfolk on 30th March 2018. Let It Bee, a 17-year-old gelding, collapsed between fences 13 and 14. No further details are available at present.”

Burnham Market was the first run of the 2018 season for Let It Bee, a 17-year-old Westphalian gelding (Lamerto H X Baroness, by Brentano II) owned by Kathryn, John, and Gayle Robinson. Kathryn had him entered to return to Badminton this spring for a third consecutive year. 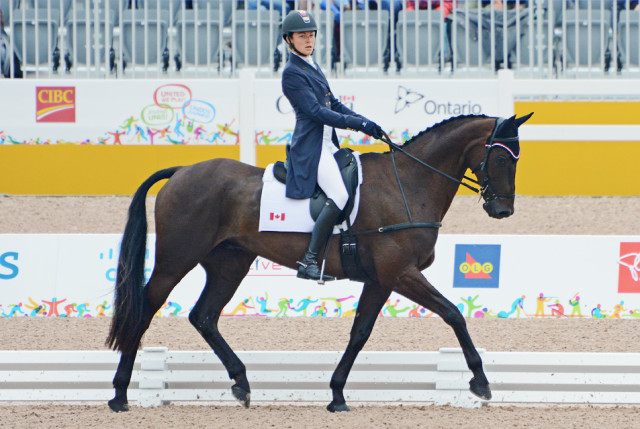 Kathryn Robinson and Let It Bee at the 2015 Pan American Games in Toronto. Photo by Jenni Autry.

Bred in Germany by Hubert Brinkmann, Let It Bee came to Kathryn as a precocious youngster. She produced him from his very first BE100 in 2009 all the way through to the four-star level. He amassed 436 British Eventing points over nine seasons with Kathryn.

Kathryn and Let It Bee represented Canada multiple times on the world stage, including the 2016 Olympics in Rio de Janeiro, the 2015 Pan American Games in Toronto, and the London Olympics Test Event in 2011. They also represented Canada in the Nations Cup at Aachen CICO3* in 2015.

Their career highlight at four-star level came at Pau in 2014, when they finished in seventh place. Kathryn and Let It Bee also jumped double clear around their first Badminton in 2016. He completed 10 CCI competitions during his career. 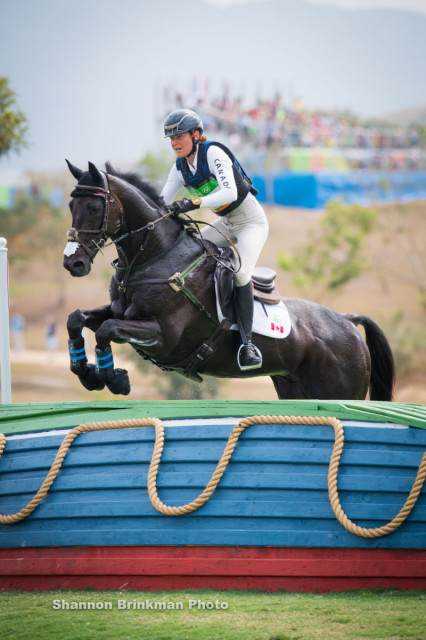 Kathryn Robinson and Let It Bee at the 2016 Rio Olympics. Photo by Shannon Brinkman.

Kathryn and Let It Bee enjoyed a strong season in 2017, finishing 12th in the CCI3* at Tattersalls, fifth at Millstreet CIC3*, and 12th in the Event Rider Masters CIC3* at Blenheim Palace. They were one of four combinations named to the 2018 Canadian Eventing High Performance National Squad.

Affectionately known as her “Black Limousine,” Kathryn adored the sleek, black gelding, and our hearts are absolutely broken for her. The EN team sends our deepest condolences to Kathryn, Gio, Sophie and the entire team at Cranford Stud Eventing during this terrible time.