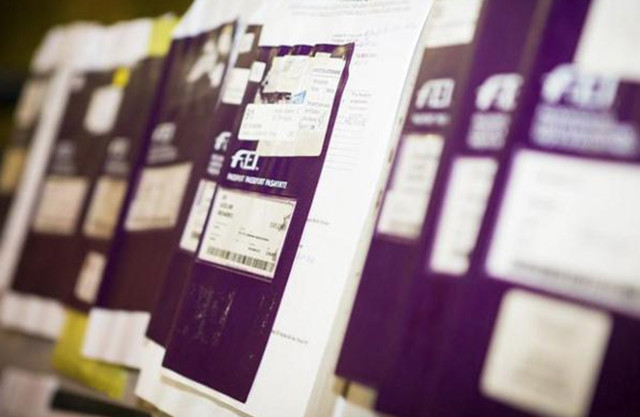 Photo via the FEI

Last weekend I asked my Facebook friends for help in brainstorming a competition name for my new horse. While there were some good suggestions, there was a debate about whether or not I’ll one day be fined $1,000 for changing his Jockey Club registered name. There were also comments from people who disagree with changing a horse’s name under any circumstances.

It’s true that last year the FEI introduced a hefty name change fee which met with a lot of criticism from the public. Several months later the FEI softened their stance on passport name changes, but not all federations immediately updated their passport applications to reflect the change.

This all led to some confusion about the current status of the name change fee. So our own Maggie Deatrick did some research and offered up the following timeline to help clarify the situation:

2. USEF and other National Federations update their passport application to reflect the name change fee per the guidelines. The public becomes aware of it in early March, and EN published this article regarding the new costs.

3. The FEI quietly issued a new Name Change Guidelines document in August 2016, allowing the use of a National Sport horse name and removing the fee for a large subset of horses. No announcement accompanied the new document, but EN published this article explaining the adjusted policy in late December.

4. US Equestrian has recently updated the New Passport Application as well as the Name Change Application, and the name change guidelines now reflect the updated fee schedule. At this point, the use of a National Sport Name should prevent implementation of the $1,000 fee as long as the name does not contain a commercial prefix.

Now that we’ve settled that, let’s discuss your thoughts on name changing.

Personally I’m OK with it, and my family is about equal in the number of horse names we have and have not changed over the years. For instance, Big Firecracker (come on) became Baccarat (much more elegant), but around the same time we bought Cor Bastille from his breeder, and that’s the name found both on his Jockey Club papers and his USEA record.

In my opinion a horse’s name should speak to you and reflect something special about the animal, be it his or her personality, skills, heritage, or even a reflection of your own path to horse ownership and life experiences. Some people, however, believe that changing a horse’s name can bring on bad juju and is just not worth the risk.

What do you think? Have you ever changed a horse’s name? Why or why not? Let us know in the comments.