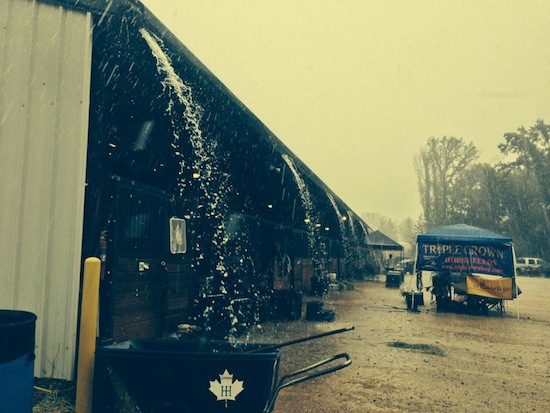 Rain at the AEC's. Photo from Liz Hall

According to Horsetalk.co.nz, four people were struck by lightning at an international event in Bulgaria on Saturday.  The spectators were reportedly standing under a tree watching cross-country when the lightning hit.  They sustained non-life threatening injuries and were taken to a hospital for observation.

Let this be a warning to all of us– take thunderstorms seriously!  Most US sporting events have a policy where the event cannot continue until thirty minutes after the lightning was last seen.  While it sometimes feels unnecessary, it’s done with competitors’ (and spectators’!) safety in mind.   Lightning can hit within five to ten miles of a storm, so if you can hear thunder, you are within risk.

According to the National Weather Service,  an average of 25 million lightning strikes are detected each year in the United States. The peak season for lightning strikes is during the summer — prime eventing season — with most deaths from lightning strikes occurring in June, July, and August.  Over 400 people are struck by lightning each year; don’t let one of them be you!