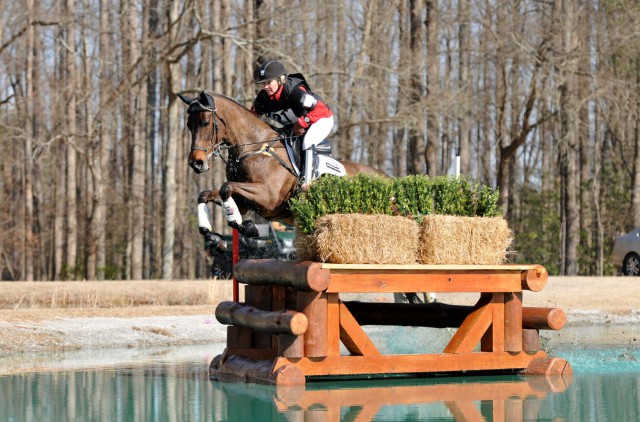 So, how many jokes can we make about today’s weather conditions at Ice Top Farm? It was quickly dubbed the North American Eventing Figure Skating Championships. What about brrr-ssage and cross-ice jumping?

Okay, so clearly comedy is not my strong suit. But, yeah, it was cold at the Pine Top Advanced Horse Trials today. The overnight temperatures dipped into the low teens, and by this morning, the water jumps were frozen over enough that early morning course walkers were able to walk out on to the ice without it breaking.

Initially, the CIC*, CIC2* and two Advanced divisions were supposed to run as a one-day competition, but as the weather forecasts showed increasingly cold temperatures for Thursday night and Friday morning, the Wilsons and Pine Top officials had mercy and chose to adjust the schedule, moving the start time for dressage back to 10 a.m.

It was still in the mid to low-20s when the competition got underway this morning, however, and there were many red faces entering the ring. Several riders let out an exacerbated “whew!” upon completing their test or shook their hands to return feeling to their fingers. 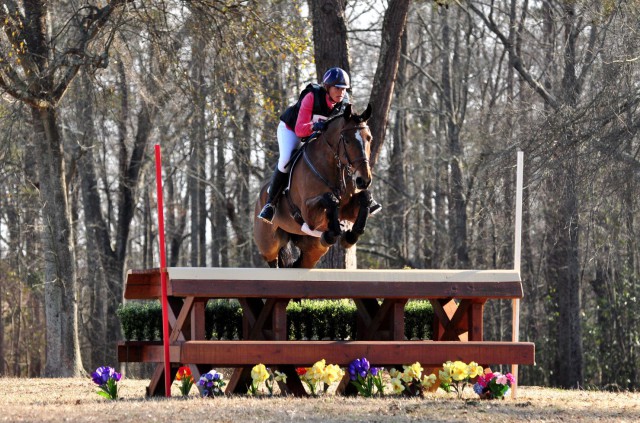 The Pine Top crew worked tirelessly to clear the water jumps of the chunks of ice before the start of cross country at 12:20 p.m.. They pumped “warm” water from the pond on the far side of the property and used a tractor to clear the ice. Around 11:15 a.m., Technical Delegate Cindy dePorter said it was “100 percent better,” but not quite good enough. The jumping phases were delayed another 40 minutes to make sure the water jumps were safe for the horses to gallop through.

Course builder Rob Mobley also drove his gator through the Advanced pond several times each hour so that competitors had an easier time walking their course for tomorrow.

We joked that today would not be the day to fall off in the water jump, and all riders had crossed the finish line dry. Then it happened. Marilyn Little, the second to last on course with RF West Indie, was unseated at a corner in the middle of the final water complex. She tried desperately to cling to the mare’s neck, but ended up completely submerged in the freezing water just a couple feet from shore.

We heard the call over the loudspeaker and through the jump judges’ radios. You could hear a collective, sympathetic clattering of teeth from the entire show grounds. Though understandably shocked, Marilyn was thankfully uninjured in the fall.

However, holding three of the top four spots after dressage and ultimately winning the CIC2* division with RF Scandalous must make up for the icy bath. RF Scandalous, an Oldenburg mare owned by Raylyn Farms and Phoebe and Michael Manders, put down a stunning test to lead the division of 31 starters after dressage. They also produced one of six double-clear show jumping rounds before adding just 3.2 time penalties on cross country to secure the win.

Marilyn’s third ride, RF Overdressed, wasn’t particularly interested in jumping today, and having incurred 16 penalties in show jumping, Marilyn went ahead and retired after their first refusal on cross country. 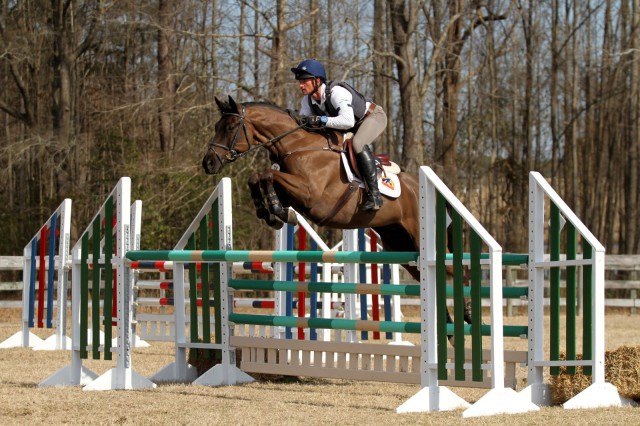 Lesley Grant-Law and What Law kept the pressure on Marilyn all day, earning the third best score from the dressage judges with a 43.1. One rail and 6 cross country time penalties awarded them second place in the two-star. Not far behind them was Michael Pollard with Tsetserleg, a Trakehner gelding owned by Christine Turner. They also had one rail and 4.4 time penalties.

The two-star was a legitimate test, with rails flying all over the place in show jumping, and two other falls on cross country besides Marilyn. Three riders withdrew before show jumping and another two withdrew before the start of cross country. There were also plenty of time penalties, which is generally expected at Pine Top, but both Ian Roberts with Faolan and Nilson da Silva and Muggle jumped double-clear across the country.

In the CIC*, the leaderboard shifted significantly across all three phases. Peter Barry and Long Island T led on a score of 40.4 after dressage and show jumping, but received a frustrating technical elimination after jumping the wrong B element at fence 15.

Will Faudree and Jennifer Mosing’s Socialite were fifth after dressage with a score of 47 and maintained their position after one rail in show jumping. They produced a lovely cross-country round, crossing the finish clear and 8 seconds inside the time to move up and win the division by more than 13 points. 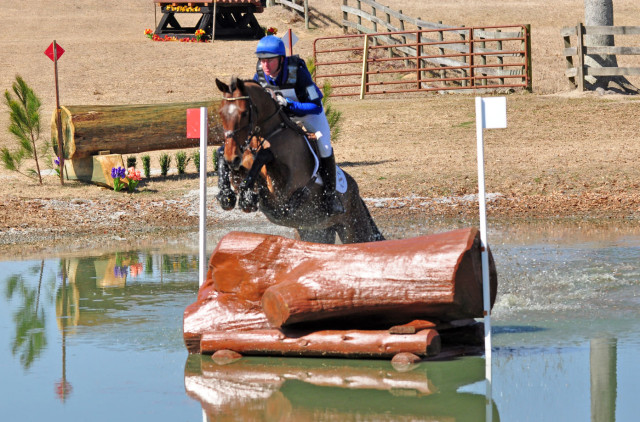 Will Faudree and Socialite. Photo by LT/Hoofclix.com

Second place went to Susie Beale and Celtic Heritage, owned by Lesley Collins. They were ninth after show jumping but moved up with a clear, fast cross-country round. Kirsten Buffamoyer and Jim steadily climbed the leaderboard from 15th place after dressage, to 10th after a double-clear show jumping round, to ultimately finish third with just a handful of time penalties to add.

The most influential fence on the one-star course was the Ditch and Wall at 14, which appeared on the Intermediate course at the event two weeks ago. Three riders had problems at this fence, leading to one fall and an elimination due to refusals. It is also where Sara Beth Anton and Blitz Volo, who were second after the first two phases, picked up their second refusal on course and retired.

As mentioned, the new schedule moved the two Advanced divisions to run over two days rather than one. Both divisions did dressage today, but only Advanced Test A show jumped. Liz Halliday-Sharp and Fernhill By Night, who had originally been entered in the CIC2*, are the overnight leaders in that division.

Having recently scored a 19.5 in the Advanced combined test at Ocala Horse Properties Winter II Horse Trials, it’s no surprise they put in a good test this weekend as well. A 24.1 put them in the lead over 16 other competitors. The pair incurred 1 time penalty on show jumping and will carry a 25.1 score forward to tomorrow’s cross country. 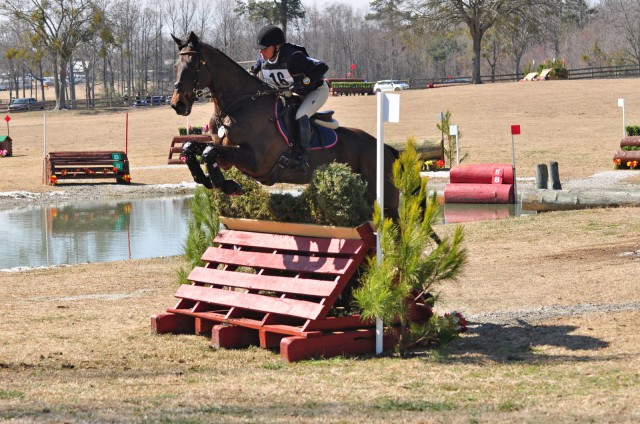 Colleen Rutledge and Covert Rights are close behind in second, having added no show jumping penalties to their dressage score of 29.5. Boyd Martin holds three of the next four positions: 3rd with Steady Eddie, 4th with Pancho Villa and 6th with Crackerjack. Phillip Dutton and Fernhill Cubalawn, winners of the Open Intermediate-1 division at Pine Top two weeks ago, are fifth after the first two phases.

The Advanced Test B division looks a bit odd on the live scores at the moment, and that’s because only a few riders show jumped in order to accommodate other ride times on Saturday. However, Michael Pollard and Ballingowan Pizazz received the top dressage score (28.2) and appear to be the overnight leaders.

Advanced Test B is a large division with 31 starters, and the dressage scores are tightly packed, so every second on cross country will count tomorrow. 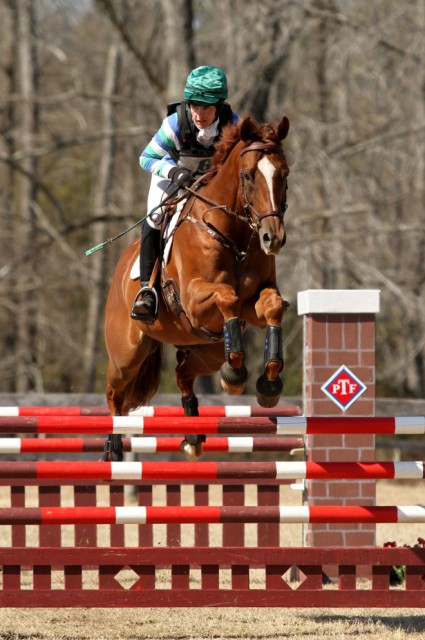 It was a great day of competition, and honestly, the weather could have been worse. Even though the air was brisk, the sun was shining. It could have been that cold and raining (or snowing) or cloudy and windy. Thankfully we’re looking at much improved conditions tomorrow.

Thank you to the entire Pine Top Farm crew for taking such care to ensure the best possible conditions for competitors today and upholding the high quality of standards we’ve come to expect from this event.

The Advanced Test B show jumping gets underway at 9 a.m. Intermediate will kick off the cross country and Advanced will take to Derek di Grazia’s new course at 1 p.m. Stay tuned for a walk around the Advanced course and check back tomorrow for additional reports. 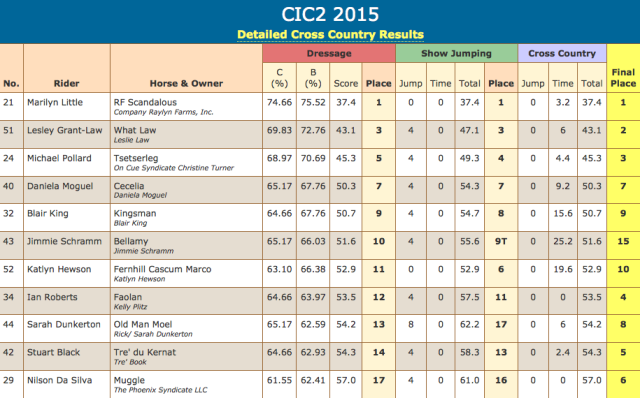 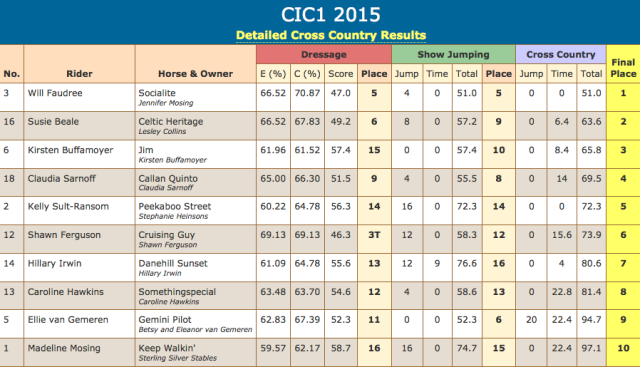 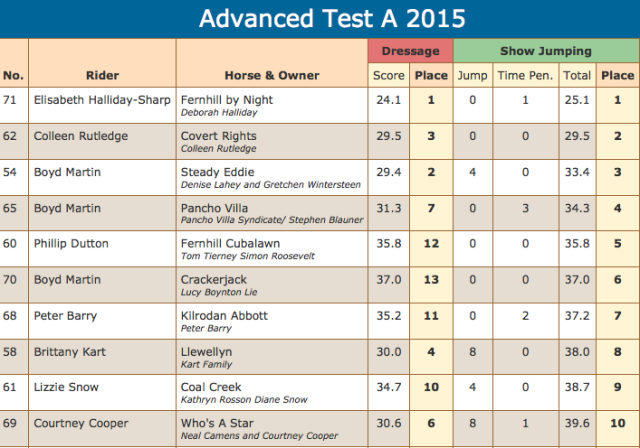