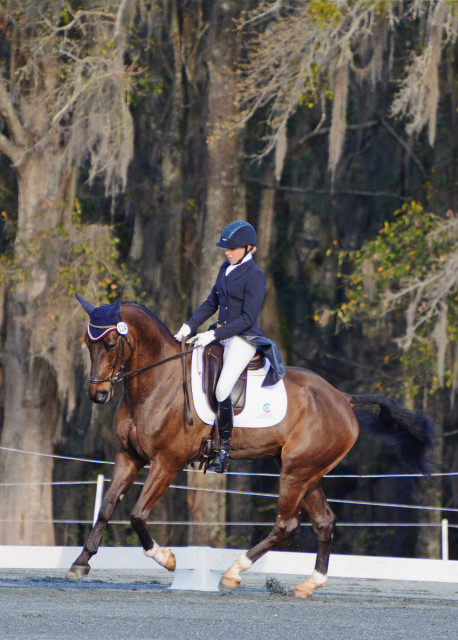 Liz Halliday-Sharp and Fernhill By Night set the early benchmark here at Red Hills International Horse Trials, scoring 41.4 this morning in the CIC3* with an accurate, expressive test. No one could ultimately catch that score, and Liz and “Blackie,” a 12-year-old Irish Sport horse gelding owned by Deborah Halliday, hold the overnight lead as we look ahead to cross country.

This is the horse’s first FEI event on Liz’s native U.S. soil. Born and raised in Fallbrook, California, Liz went to England for a one-year working student gig with William Fox-Pitt and ultimately never left. She’s been based in East Sussex for the past 15 years, competing on the East Coast for the first time ever this year while spending the winter in Ocala to prepare for her first CCI4* at Rolex.

Blackie tends to be a quieter horse in the little white box, and Liz said this morning’s chilly temperatures pepped him up a bit. She very nearly caught her own leading score with her second horse in this division, HHS Cooley, an 11-year-old Irish Sport Horse gelding also owned by Deborah Halliday. The test was just about flawless until the very end when “Cooley” swapped leads just before the final halt and salute. 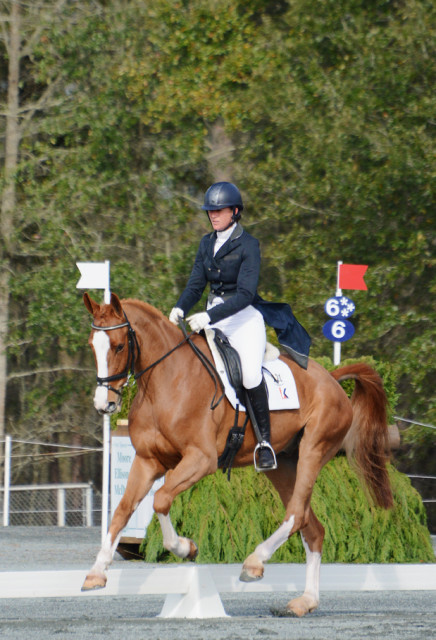 That little blip still put them on a very good score of 43.4 for third place. “I was really pleased with both of them,” Liz said. “It was a bummer with Cooley right at the end with a little miscommunication. I went to collect him with my seat, and he thought I meant change. But they both tried really hard. It was really cold, and it’s tough to get your best test when it’s freezing, but I was thrilled with how they both stepped up. There are always little bits that can be improved, so you keep working away at it.”

Lauren Kieffer and Czechmate are sandwiched between Fernhill by Night and HHS Cooley on a score of 42.7, a very exciting performance for the horse’s CIC3* dressage debut. “Czechy,” a 9-year-old Czech Warmblood gelding owned by Court and Kylie Ramsey, is green to this level but incredibly talented, and he held his composure like a polished pro despite the chilly temps and wind. We’ve predicted him as the horse that could play spoiler here this weekend.

Marilyn Little and RF Demeter had the honors of performing the brand new 2015 FEI Three-Star Test A for the very first time in the world — no pressure, right? They got a little lost at the beginning of the test for an unfortunate error early on in an otherwise lovely performance. Their score of 46.7 puts Marilyn and “Demi,” a 13-year-old Oldenburg mare owned by Team Demeter, in fourth place.

Demi’s stablemate, RF Quarterman, sits just behind her in fifth place on a score of 47. After making his eventing debut last year, this 7-year-old Oldenburg gelding owned by Raylyn Farms only continues to impress, putting in a seasoned performance today in his first attempt at a three-star test.

Buck Davidson and The Apprentice, an 11-year-old Irish Sport Horse gelding owned by Sherrie Martin, put in a relaxed, workmanlike performance for seventh place on a score of 48.2. Buck also has another horse sitting just outside the top 10 with Copper Beech, who was a little nervous and unsettled at the beginning of the test despite several reassuring pats from Buck.

“Sean,” a 9-year-old Irish Sport Horse gelding owned by Carl and Cassie Segal and Sherrie Martin, insisted on cantering away from the first halt and salute, but Buck recovered well, with the test building to a nice crescendo as it went on to score 50.5 for 11th place. The horse just oozes star power and is a pleasure to watch. 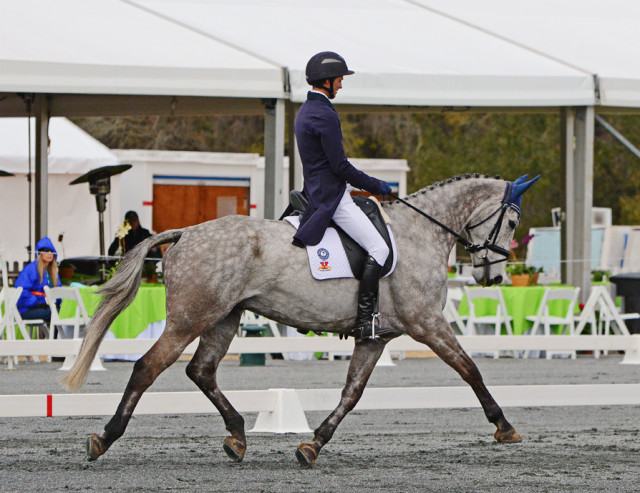 Kelly Prather and Blackfoot Mystery, an 11-year-old off-track Thoroughbred gelding owned by the Blackfoot Mystery Syndicate, are holding their own in a class top 10. While the horse can’t quite compete with the fancier movers, he’s extremely obedient and tries his heart out, allowing Kelly to squeeze accuracy out of each movement. Their score of 48.6 puts them in seventh place.

Jennie Brannigan and Cambalda held the audience captive by showing off impressive two-tempi changes around the ring before starting their test. And “Ping,” a 13-year-old Irish Sport Horse gelding owned by Tim and Nina Gardner, wanted to keep showing just how well he knows his changes — sneaking one in during the counter canter. Jennie quickly corrected the mistake, but that docked some points for a score of 49.2, which puts them in eighth place.

Jacob Fletcher put in a very nice test with Atlantic Domino in the horse’s first FEI event on U.S. soil. Tanya Kyle campaigned the horse, a 10-year-old Irish Sport Horse gelding owned by Fletcher Farms, through the two-star level in Europe before Jacob took over the ride. They finished 11th in the Ballindenisk CCI3* last year, and Jacob is looking ahead to tackling the inaugural CCI3* at Rebecca Farms in Montana this year. 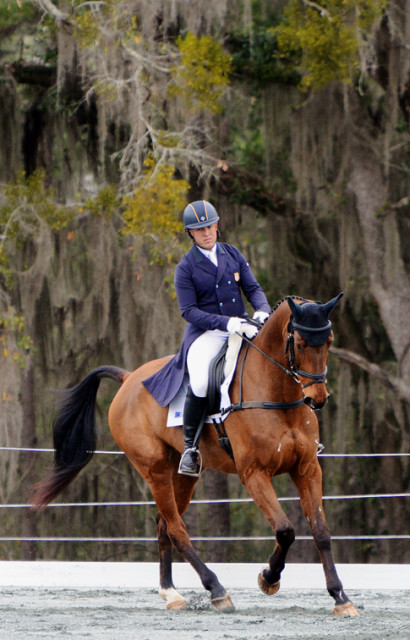 Buck Davidson and The Apprentice. Photo by Jenni Autry.

Allie Knowles and Sound Prospect round out the top 10 on a score of 50, which is their personal best at this level. Sounder, a 13-year-old Thoroughbred gelding Allie owns, is another real trier who makes up for what he lacks in movement by giving it everything he has in the ring. She should be thrilled with that score and that performance. And how cool is it to have two OTTBs in the top 10 after dressage?

CIC2* and CIC* dressage are still underway, so be sure to check back later in the day when we catch up with the leaders. Advanced dressage starts at 2:45 p.m. EST, with Lisa Barry and F.I.S. Prince Charming leading the way in the small yet mighty division. If you missed my course preview from this morning, be sure to check it out here, and don’t miss Maggie’s By the Numbers predictions for the CIC3* here and Advanced here.

As always, the Red Hills team is fantastic and extremely accommodating, and the first day of action is running extremely smoothly. Thank you to the organizers and volunteers for their hard work, and best of luck to all the competitors who have yet to do battle in the little white box. Go Red Hills, and Go Eventing. 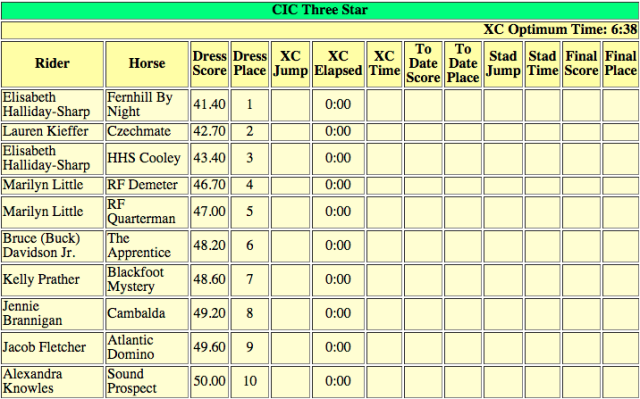