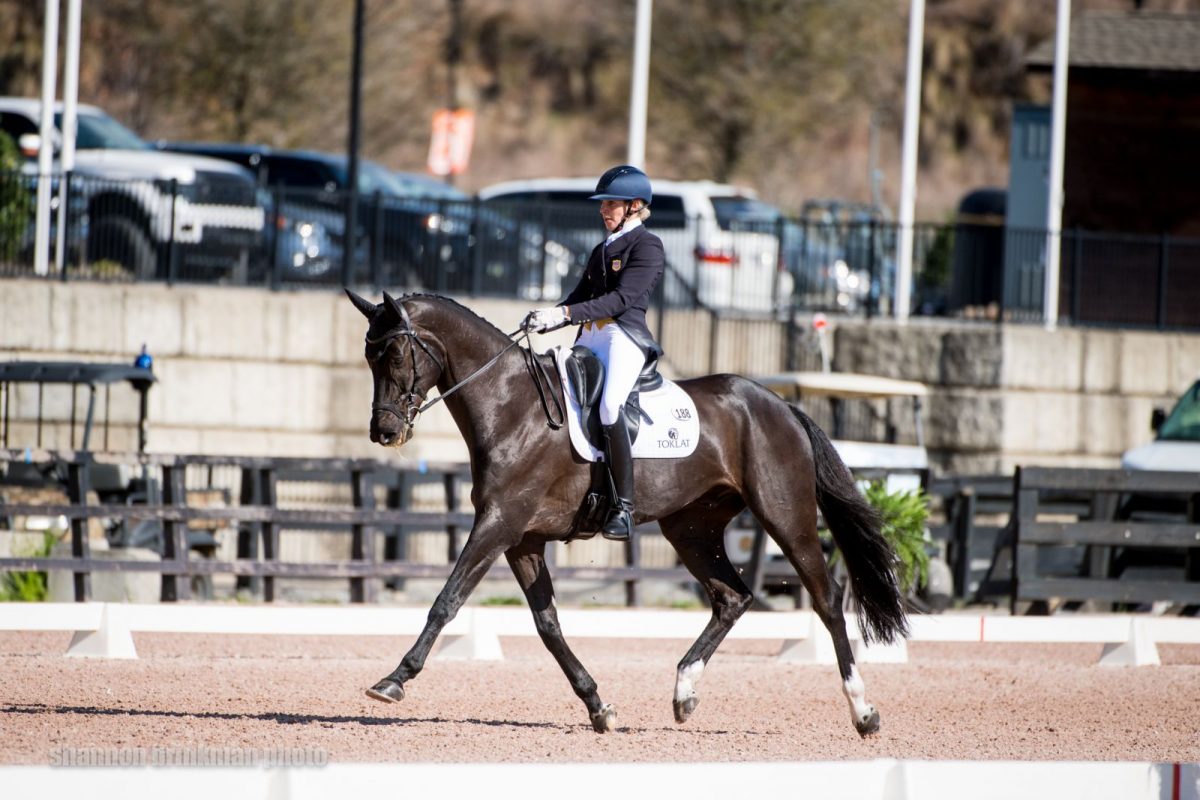 After having to withdraw from the Tokyo 2020 Olympic Team when her horse sustained a minor injury, Liz Halliday-Sharp is laser focused on having a successful 2022. After dressage at The Fork at the Tryon International Equestrian Center CCI4*-S went to Irish-bred horses, she and Cooley Moonshine (Cobra – Kilpatrick Duchess, by Kings Master) lead the CCI4*-S on 26.0, and she is also leading the CCI3*-S with the seven-year-old Shanroe Cooley (Dallas VDL – Shanroe Sapphire), owned by Ocala Horse Properties.

Phillip Dutton is filling in for her to ride Cooley HHS Calmaria (Cyrano 145 – Chester Lass), who is third in the 3* on 28.6 (Lucienne Belissimo is second riding Dyri (Diarado – La Calera, by King Milford xx) on 27.8). Liz, who broke several ribs and injured her leg in a fall on cross country at Red Hills less than a month ago, is also ranked 10th on Cooley B Cool (Heritage Fortunas – HHS Carlota) with 30.7. 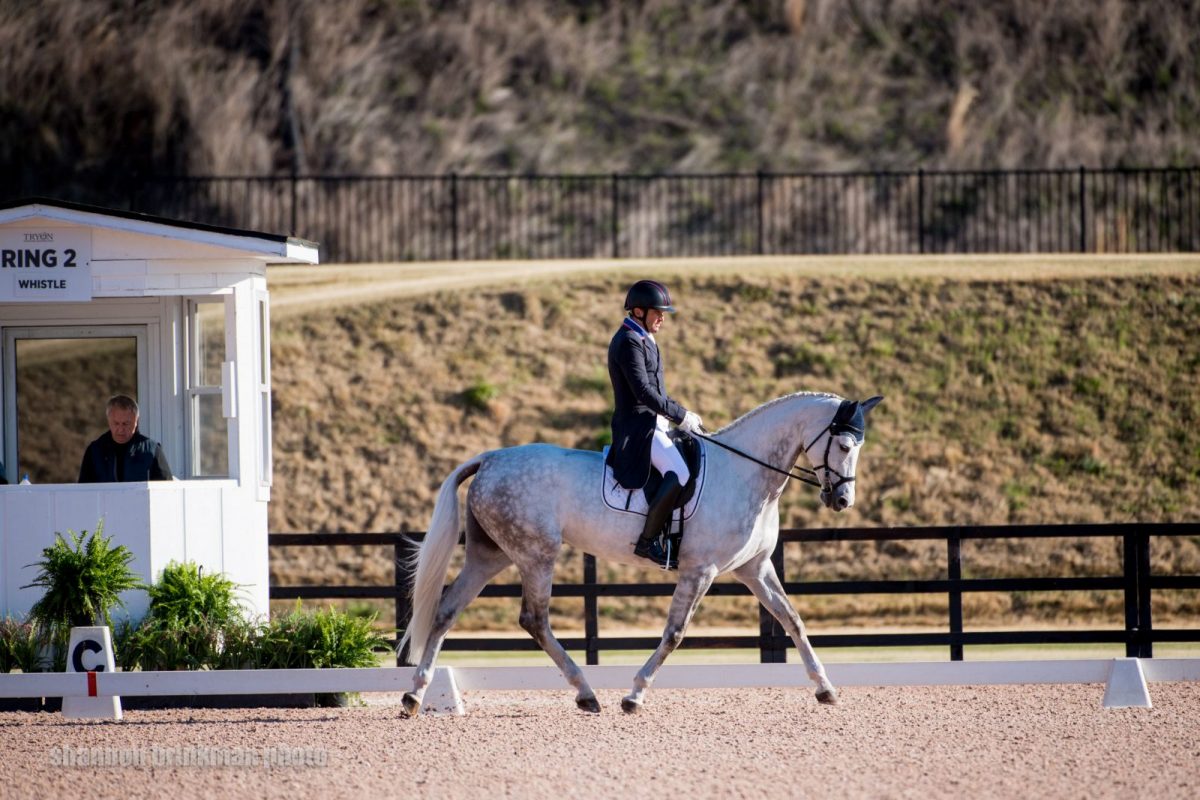 Phillip Dutton is catch-riding Cooley HHS Calmaria in the 3*-S this weekend for Liz Halliday-Sharp. Photo by Shannon Brinkman Photography.

“I’ve done everything I can to get myself back in the saddle – they were badly broken, not just cracked,” she said. “I had steroid injections in the broken ribs and I’m kinesio-taped up to the eyeballs, but it’s getting better every day. I’ve got four entered in the four-star at Kentucky and I debated running [DeNiro Z] in the five-star, but he had an abscess and also had time off, so I’ll take him to Luhmuehlen along with another horse. It was the universe telling us to go to Germany!”

Cooley Moonshine, 10, owned by the Monster Partnership, Rob and Chris Desino, Renee Lane and Deborah Halliday moved up to 4* last year, so he’s still fairly new to the level.

“He just needs to keep getting stronger and finding more lift and power, but he did a lovely job,” Liz commented. “It’s exciting that he’s getting that kind of score when I know there’s more to come. He’s a very good jumper; he’s strong cross country and not an easy ride, but he’s brilliantly talented.” 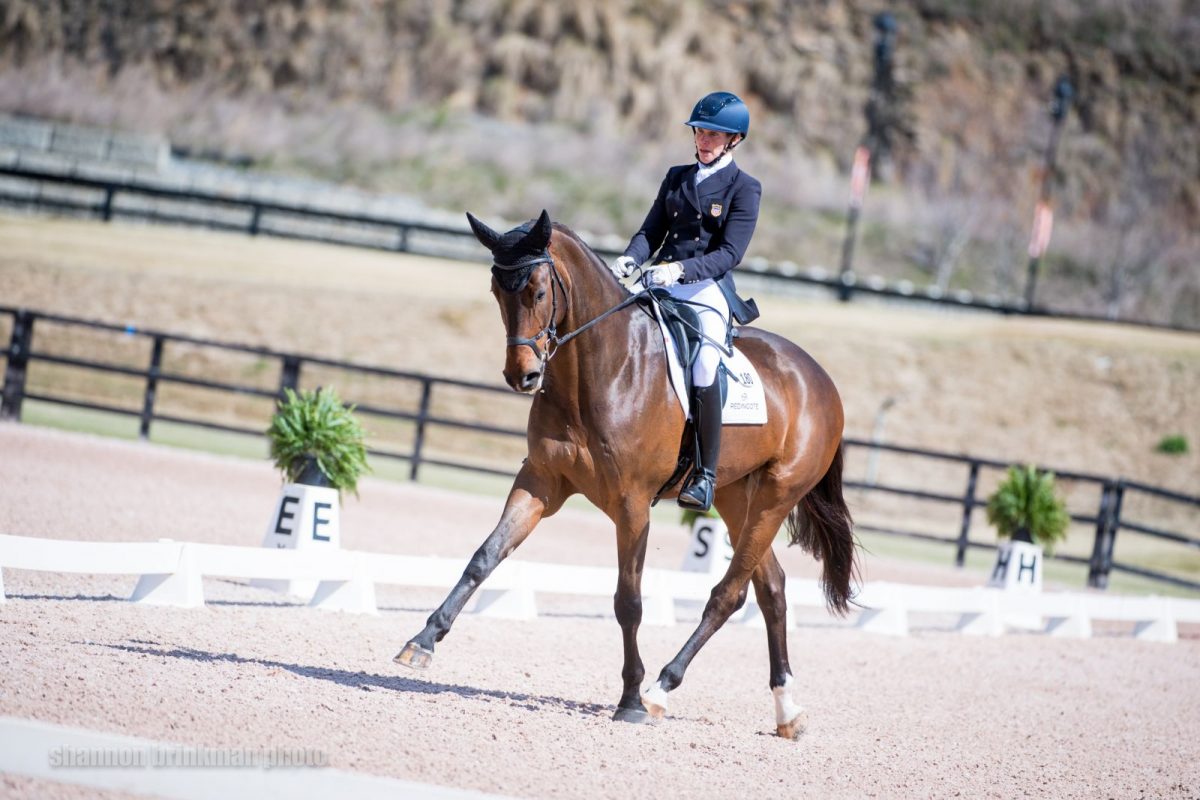 “Shanroe Cooley is doing his first three-star,” Liz continued. “He had some green moments but did some great things. There’s also a lot to come in his future, he’s not the polished product yet but he’s a world-class horse in the making. My goal for him is [FEI World Young Horse Breeding Championships at Mondiul du Lion] this year.”

She noted, “Phillip is riding Calmaria for me because I knew didn’t have it in me to ride two hard pullers this weekend. Much as I adore her, I know Phillip will do a fantastic job with her.”

While she’s been sidelined, Liz has recruited a team of riders to help her out. “Phillip has ridden [Cooley HHS Calmaria] twice cross country at my place; I had him ride some horses cross country for me, Peter Wylde jumped them a ton of them at [World Equestrian Center Ocala], and Erik Duvander galloped a few for me after I was injured. Obviously we lost some schooling but the horses haven’t suffered fitness-wise, which is fantastic.”

Liz admits that she probably got back to riding a little sooner than she should have, but she did compete one horse last weekend at Stable View and said she felt okay. “The horses were in need of a run this weekend, so the plan is to do the full event with all of them. I ran Cooley Quicksilver last weekend at Stable View and felt okay, so I remain hopeful I’ll be able to do it all.” 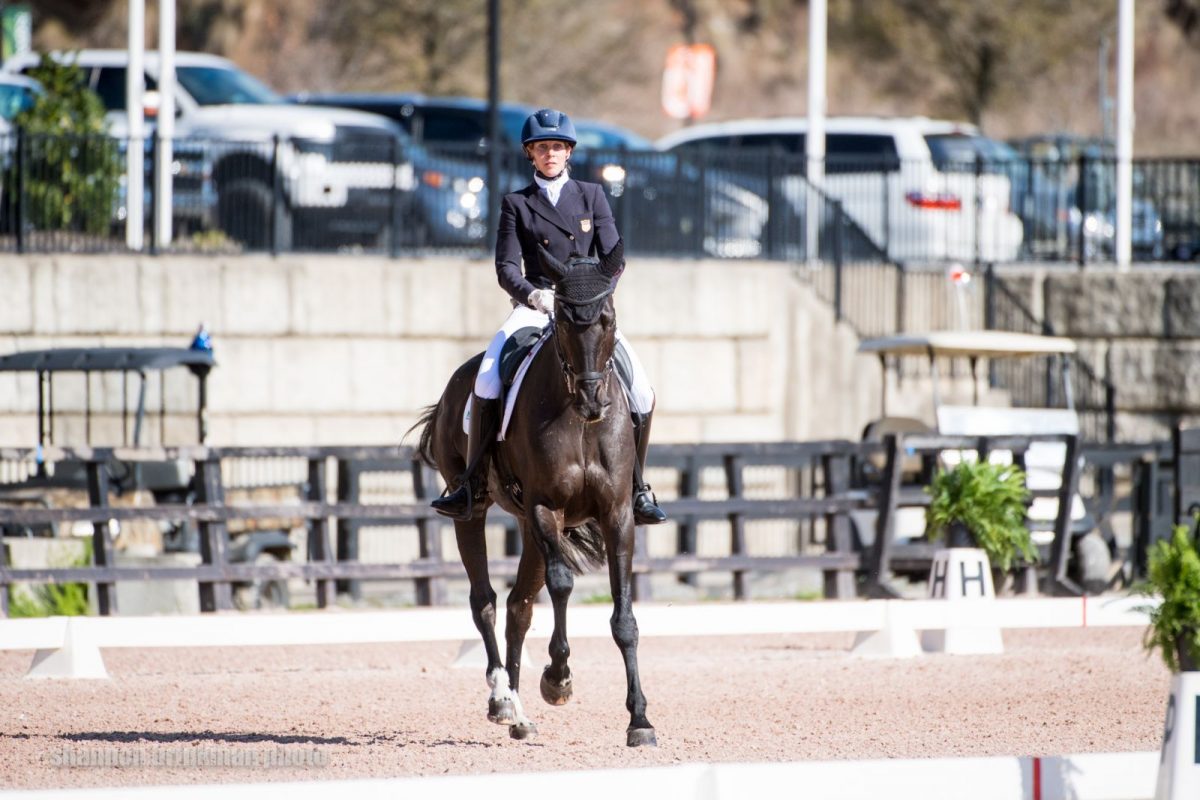 With Cooley Be Cool, who is placed tenth, Liz said, “I had a fluffy, stupid moment in the test where I went off course –- I went a little spacey for a minute, and I was not happy with myself, but he’s also young and green at this level. The letter ‘R’ marker had blown down and he spooked at it every time; the weather was very blustery, and that just added another challenge. But I think he’s going to be a very good horse for the future.”

Second-placed Will Coleman plans to head to the 5* at Kentucky with Off the Record (VDL Arkansas – Drumagoland Bay, by Ard Ohio), his 2021 Aachen CCIO4* winner, who earned a 27.2 today.

Will said the 13-year-old Irish gelding has been maintaining and progressing with the level of training he achieved last year. “I’m working with great people and constantly finding ways to improve,” he said. “Ian Woodhead has been helping me on the flat for the past few years, he’s absolutely brilliant and has been a real game changer for me. Today’s test lacked a little punch and there were a few mistakes, realistically, but I’m looking forward to the future.” 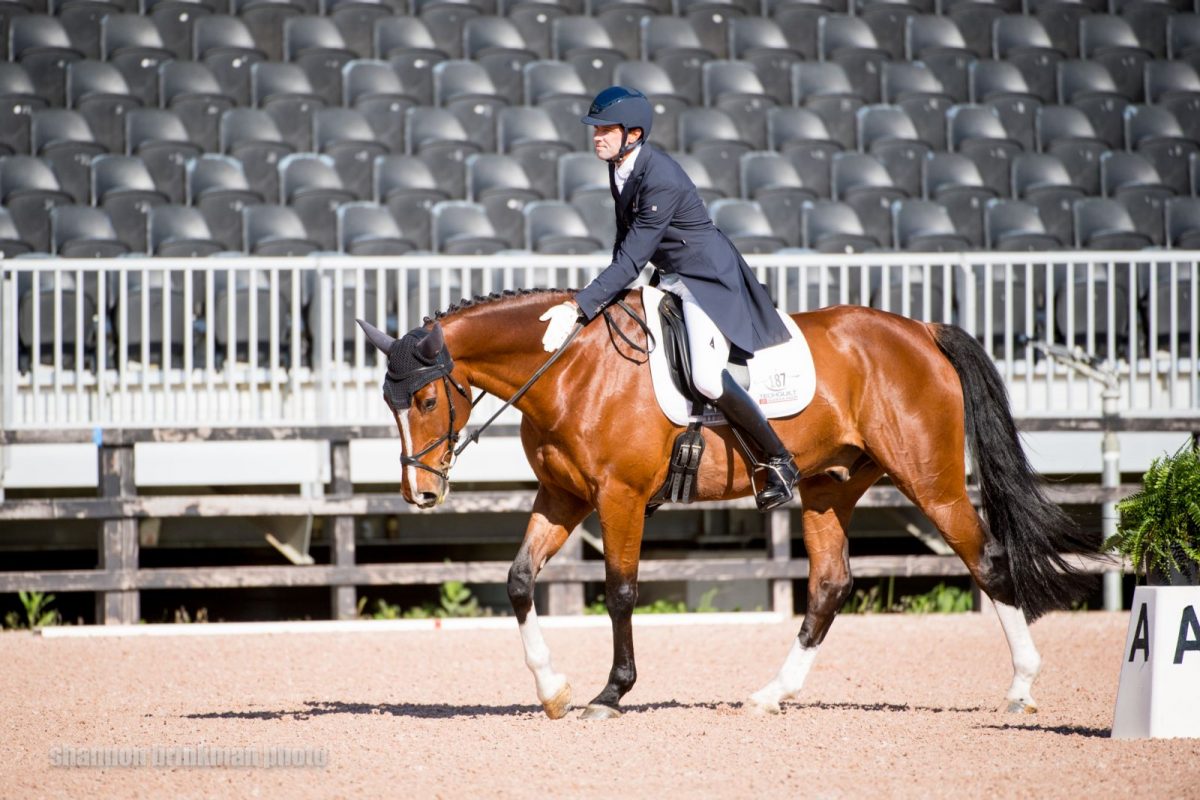 Pats for Off the Record. Photo by Shannon Brinkman Photography.

The upper levels will show jump tomorrow night, under the lights in the stadium, and run cross country on Sunday morning.

“He’s never jumped under the lights,” said Will, “and obviously we want to be competitive but part of the reason we came here is for the atmosphere, because it’s a good preparation for Kentucky, so we’ll just see how it goes tomorrow.”

After walking the cross country course, which is designed by Captain Mark Phillips, Will commented, “I like the general flow of the cross country better than some years. It gets a little twisty at the end, and there are a few technical things to keep you on your toes but I don’t think any of us come here for it to be soft. It’ll be good to see where these horses are as we’re heading to Kentucky.” 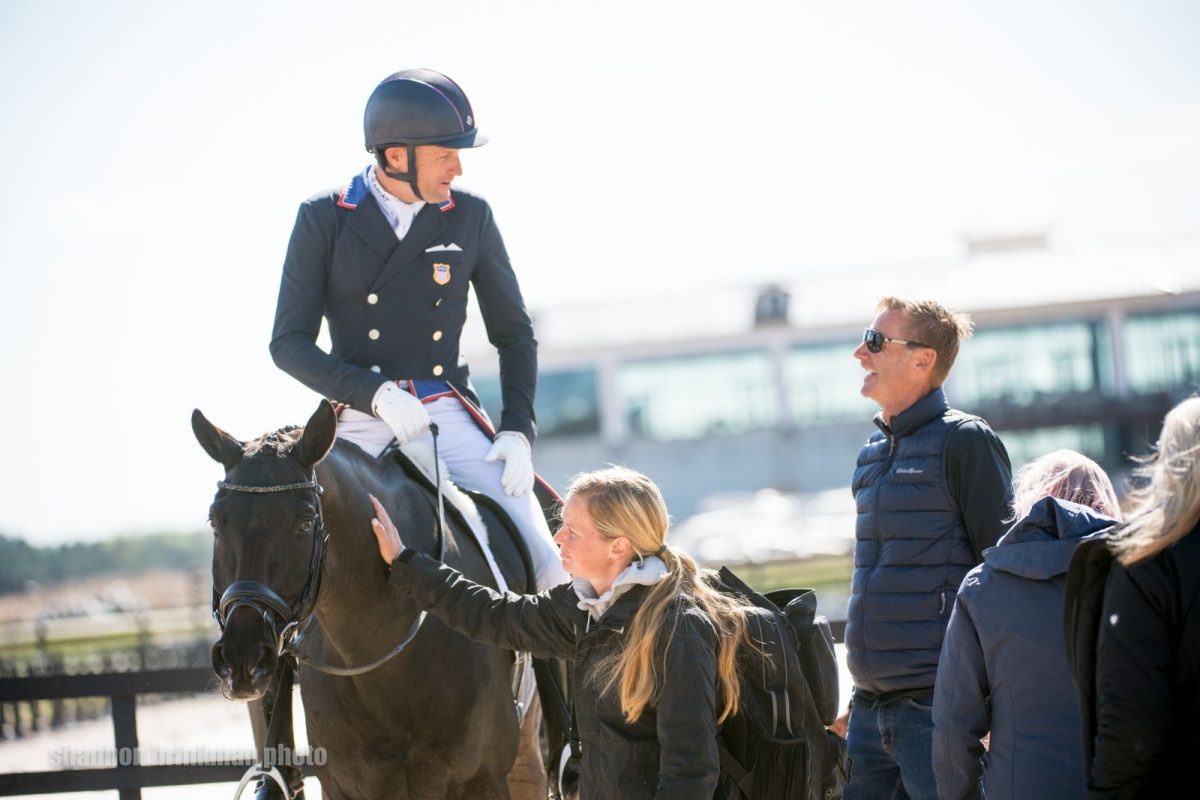 Boyd Martin and the Turner family’s Tsetserleg (Windfall II – Thabana, by Buddenbrock), his 2020 Olympic Games partner, are close behind Will in the 4*-S with a 27.7. The little black Trakehner, who is 15 this year, looked full of pep and ready to get back on course. He’ll need to pick up his toes in the show jumping tomorrow as there is no room for error at the top of the standings, with Phillip Dutton and Z (Asca – Bellabouche, by Babouche VH Gehucht Z) fourth on 28.0 and Boyd with On Cue (Cabri d’Elle – On High, by Primitive Rising) and Tamie Smith and Fleeceworks Royal (Riverman – Marisol) tied for fifth (28.1). 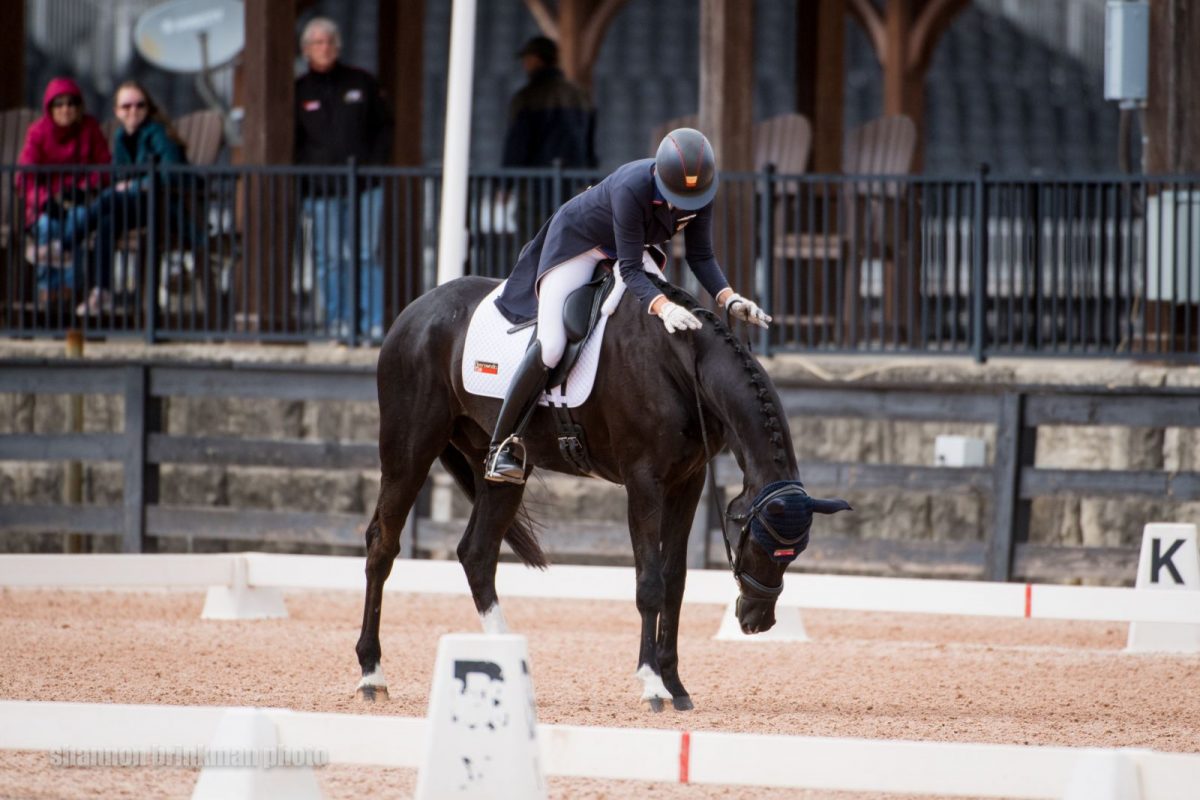 Tamie Smith gives Mai Baum a pat after scoring a 21.1 in the Advanced this afternoon. Photo by Shannon Brinkman Photography.

Tamie also has a commanding lead in the Advanced-B division with Mai Baum (Loredano 2 – Ramira, by Rike), who is entered at Badminton next month.