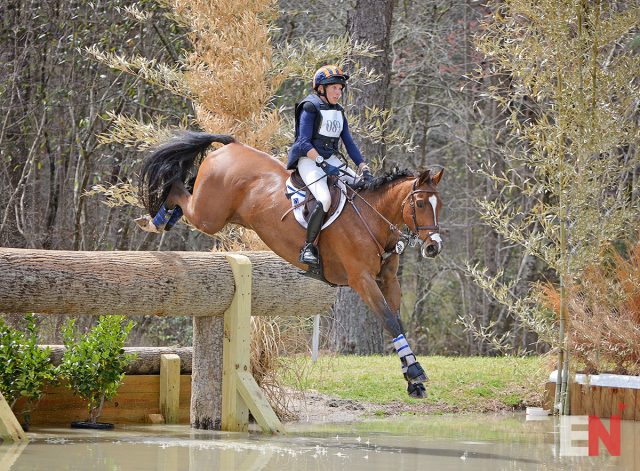 Liz Halliday-Sharp’s Deniro Z has won his second two-star this spring with a wire-to-wire win in the Matt Faudree & Attwood Equestrian Surfaces CIC2* at Carolina International. The 9-year-old Dutch Warmblood took the lead in a huge division of 62 starters on a dressage score of 41.7. A double clear show jumping round gave them some breathing room for cross country, where they added only 1.6 time penalties today for a final score of 43.3.

Deniro has had an impressive career so far, with numerous national wins and four international wins since 2016. Liz told EN last month that she was hoping to syndicate Deniro and is excited to announce that they do have new owners for him and she he will be staying in her barn.

“He’s just unreal. It’s funny because I think he’s really kind of coming into himself. We weren’t really sure what kind of horse he’d be. He’s always been a sale horse and he’s become this really awesome dude,” Liz said. “I really think he’s a top horse… I think the two of us get on very well, which is important, and it’s nice when you’ve produced them from the beginning to really know the horses.”

Deniro came to Liz in the summer of 2015 from Francis Whittington. He had little experience, but won his first event and showed promise on cross country. He kept winning and kept progressing from there. “Each level you challenged him, he said ‘okay, I can do that.’ He’s very much his own person, but he really likes the party. He gets it and he likes to compete. He nearly always goes in the ring and delivers.”

Niro will head to the Ocala CCI2* next month. Liz’s next goal with him this year is to do the Blenheim Young Horse CIC3* for 8/9 Year Olds. “He nearly could do an Advanced now, it’s just solidifying him at each step of the way.” 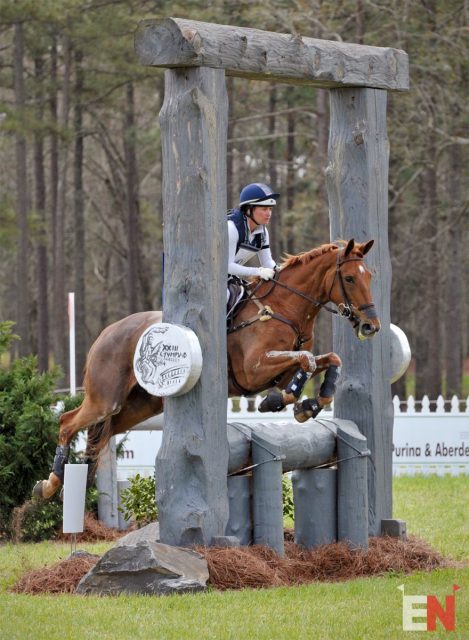 Hannah Sue Burnett and Jacqueline Mars’ 15-year-old Oldenburg mare RF Demeter redeemed themselves from a fly by at Red Hills two weeks ago with a clear round and two time penalty points to secure a second place finish today on a 47.2.

Hannah Sue said she had walked the course this morning with Karen O’Connor and formulated a plan with the help of Demi’s former rider Marilyn Little. “I stuck to that plan and it worked really well,” Hannah Sue said.

“It’s very different to how I ride my other horses in cross country. They go in the contact in the gallop and she doesn’t like that at all. By fence 5 I figured that out. Then she took a breath and was so much fun. I had a blast. Everything rode great and she felt like my horse… I felt like I could have run around Kentucky.”

Coming third was Kylie Lyman and Joan Nichols’ Cooley Ice, who made a steady march up the leaderboard throughout the weekend. They started in seventh with a 49.2 and finished on that score for third place. Bobby Meyerhoff and his own Fortuna also finished on their dressage score of 53.7, vaulting up the places from 28th after dressage to ultimately claim fourth. Will Coleman and the Conair Syndicate’s Soupcon du Brunet made a similar leap, going from 17th to fifth with only four time penalties to add to their dressage score of 51.6.

Only four two-star competitors rode double-clear on cross country today: Arden Wildasin and Kineo, Tayler Stewart and Ideal Contini, Bobby and Fortuna, and Kylie and Cooley Ice. Bobby and Kylie were the only two riders to finish on their dressage score. Way to go! 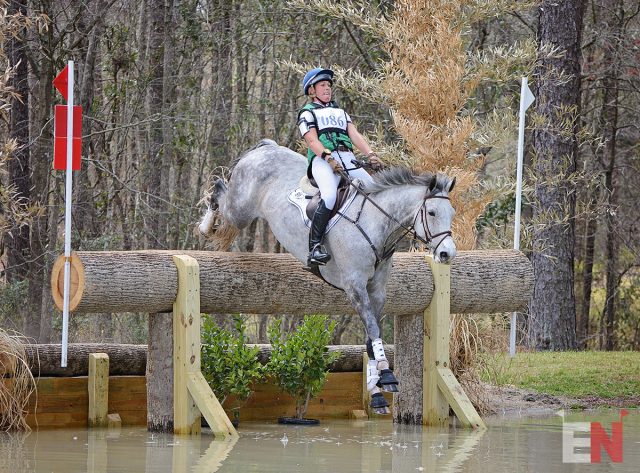 After a minor injury in 2015, the Blossom Creek Foundation’s BCF Belicoso has returned to competition in excellent form. Scoring a 37.5 for a tie for third in dressage, Matt Brown piloted “Holden” to two double-clear jumping rounds to win the Landmark’s Young Event Team CIC*.

“After he was an alternate for the Pan American Games, he had a fairly minor tendon injury and we gave him a lot of time,” Matt said. “I think the break and the time rebuilding him was actually really good for him because he feels a lot stronger. He doesn’t have the base of fitness obviously so we need to take our time and build him up, but he’s just a super horse to have in the barn.

“His dressage I think has come along the most because we’ve been doing a lot flat work during the rehab. I was really happy with his dressage test and this event i actually wasn’t freaking out the whole time cross country worrying about him. I let him gallop a bit more. He feels great. I couldn’t be happier for him.”

The plan is to run Holden at another Intermediate or two-star at Fair Hill before targeting a CIC3*. “I’m going to really try to get him as fit as I can. He’s the opposite of Super Socks BCF and needs a lot of fitness, so that will be our primary goal this year: get him really fit and confident and see where we go.” 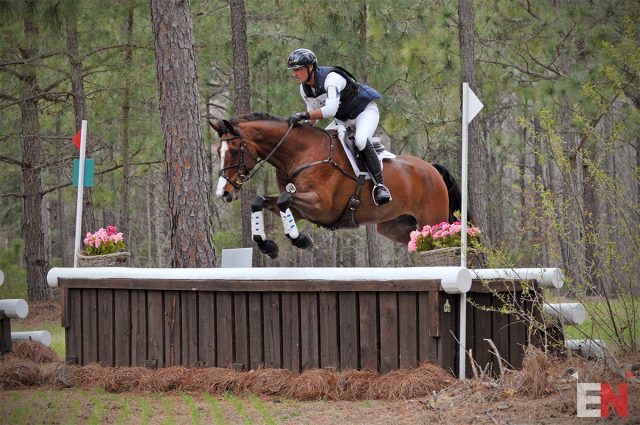 Boyd Martin and Contessa hunted down the top spot throughout the competition, moving from second after dressage to third with 2.4 time and finally settling in for second place after a double clear show jumping round today. Valerie Vizcarrondo and Favian added one rail to their score today to finish on 41.8 in third place.

Jennie Brannigan and FE Lifestyle moved up from 13th after dressage to finish fourth on a 45.8, having added two second of time on cross country and another 2 second today in show jumping. Will Faudree and Michel 233 round out the top five, finishing on their dressage score and moving up from 22nd after dressage.

That wraps up the FEI divisions at Carolina International. The national divisions finish up tomorrow with the Advanced show jumping first thing in the morning. But the EN team isn’t done yet! We’ll be back with more from #CICIC. 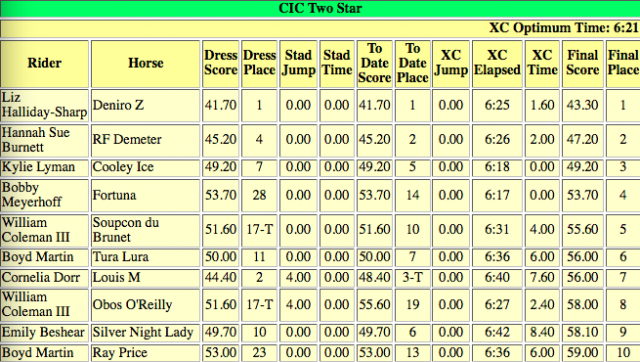 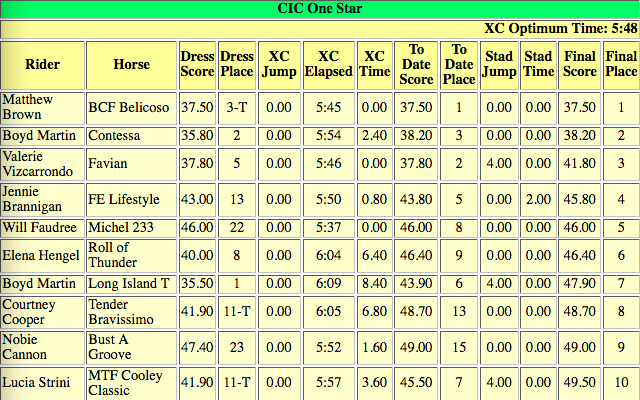