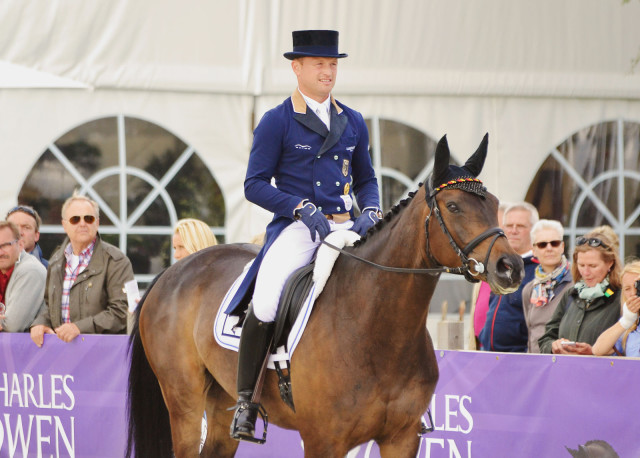 Lucinda Fredericks and Flying Finish have posted a score in the 30s in each of the four-stars they’ve contested as a pair, and they continued the trend today with a 38.7 to hold the overnight lead at Luhmühlen. If you can believe it, that’s actually the worst they’ve ever scored at this event, as they had a 36.7 last year and an astonishing 31.8 in 2012. After pulling up at Badminton when Christi suddenly went lame due to a scratch on his stifle, Lucinda will be out for blood tomorrow as she makes a bid for the Australian World Equestrian Games team.

Of course, she’ll have to contend with Michael Jung if she wants to win. With Sam tucked away in bubble wrap for WEG, Michael brought his 9-year-old mare fischerRocana FST this weekend for her first four-star; they scored 41.5 for second place. As you can see in the video, this wasn’t the perfectly polished performance we’re used to seeing from Michael at this level, but considering this little mare is just 9 years old and already this good, it’s clear he has yet another dominant horse in his arsenal. Her weakest phase is show jumping, which we saw last year at Boekelo.

Ingrid Klimke and Horsware Hale Bob round out the top three on 42.0. This was another lovely test in the horse’s four-star debut. He was ninth at Boekelo CCI3* last year and is an exciting horse for the future with Ingrid’s longtime partner FRH Butts Abraxxas now retired. Braxxi’s official retirement ceremony is tomorrow afternoon following CCI4* cross country, and it will be an emotional occasion with so many German eventing fans in attendance. Chinch is already blubbering just thinking about it.

At the conclusion of dressage, Lucinda was the only rider to crack the 30s, with 14 riders scoring in the 40s, including Phillip Dutton and Mighty Nice and Boyd Martin and Shamwari 4. Phillip’s score of 46.0 puts him and Happy in 10th place, followed closely by Boyd and Shammie in 12th on 47.8. Boyd is also sitting in 33rd place with Otis Barbotiere on 58.5. CCI4* cross country starts at 9 a.m. tomorrow. Stay tuned for much more from Luhmühlen. 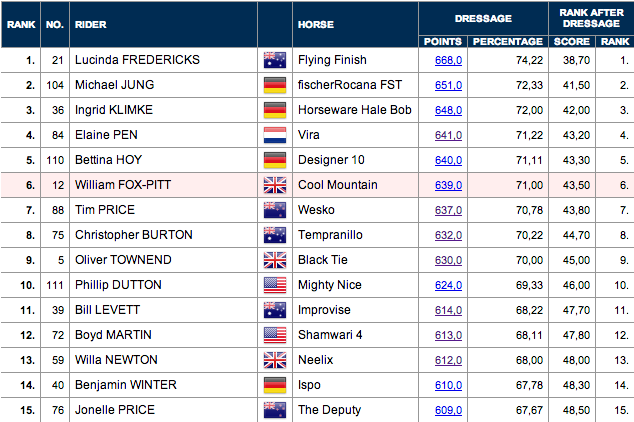