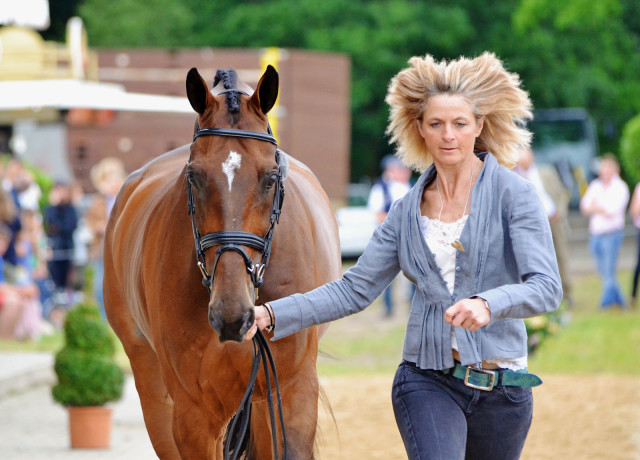 Lucinda Fredericks has sold her top horse and four-star partner Flying Finish to financially secure her future at her base in Wiltshire, England, with her daughter, she announced in a press release today. Caroline Powell will now take over the ride on the 12-year-old Holsteiner gelding.

“We are all so sad to say goodbye to Flying Finish, who has been my top horse for the past three years,” Lucinda said. “Flying Finish’s sale has been very important towards securing my and Ellie’s future at Rosegarth as our home and training base.”

Always a threat to win the dressage at a major competition, Flying Finish was selected for Australia’s 2012 London Olympic team as a 10-year-old after finishing 2nd at Luhmühlen CCI4* that year. He finished 10th at Luhmühlen last year. Lucinda owned the horse in partnership with her brother, Angus Murray, and Richard Ames.

“I will always be very grateful to Richard Ames for stepping in to help me keep the ride on Flying Finish soon after the Olympics; we have had a lot of fun and success over the last few years,” Lucinda said. “Flying Finish will now be ridden by Caroline Powell, who is an amazing cross country rider. I am honored that she has taken him on; it will be exciting to see the new partnership competing next season.”

Lucinda has ridden the horse since 2009, when Donald Reid found him in Germany as a 7-year-old. He intended to compete Flying Finish at the one-star level, but Lucinda took over the ride when his business commitments kept him out of the saddle, purchasing the horse from him after the London Olympics.

Caroline rode Flying Finish in the Open Intermediate at Allerton Park in September, finishing in 6th place on 39.5 to end his season. At 12 years old, the horse is just entering the prime of his career; it will be exciting to see what they accomplish together in the coming years.

Lucinda also sold Mr. Sydney Rocks, who she competed at the CIC3* level, to Allison Springer last month after Jess Montgomery learned of his availability and recommended the horse. He has since arrived in the States and will be out competing with Allison next season.