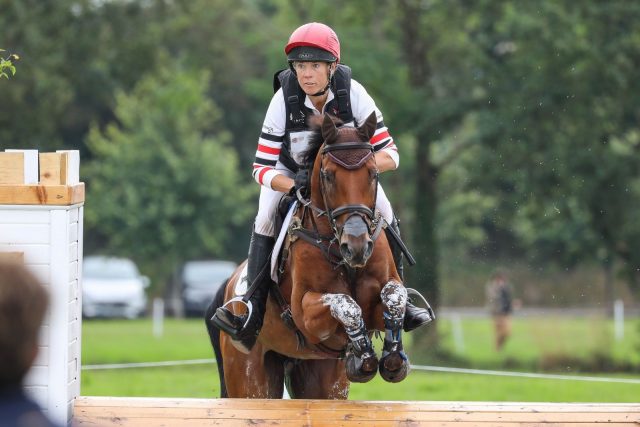 Lots of action afoot at Millstreet International Horse Trials! Let’s get down to it, shall we?

When the going gets tough, the tough get going, creating a ferocious, fast-paced fight for the finish. But there was no stopping the Kiwi, who climbed from outside the podium to take her first-ever Event Rider Masters win.

“I’ve never been on the top spot of a podium, and I can’t tell you how good it feels – it’s absolutely fantastic,” said a celebrating Lucy Jackson, who made her first podium appearance when finishing third at the ERM opening leg at Chatsworth with Superstition this spring.

Lucy’s exceptional 26.4 dressage had put her into equal fourth place overnight and a clear round this morning bumped her up into third – but it was a lightning-fast clear round across the country that allowed her to take the win, aided by the withdrawal of two-phase leader Oliver Townend. 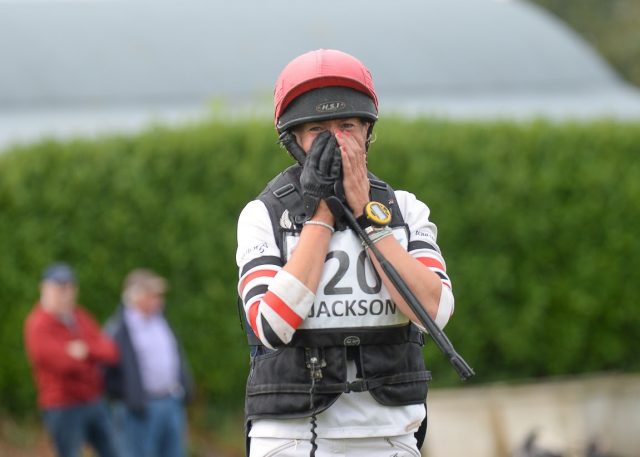 Though she didn’t deliver one of the three clear rounds inside the time, Lucy added a tiny two seconds to the 6:05 optimum time, allowing her to take the win by a 0.3 penalty margin.

“It’s huge pressure having a point-to-point rider as an other half,” she said with a laugh. “The whole way around I was thinking, ‘don’t be slow – don’t be slow!’ I’m not known for being fast, but the little horse is a superstar. There’ll be a lot of drinking in the pub this afternoon!” 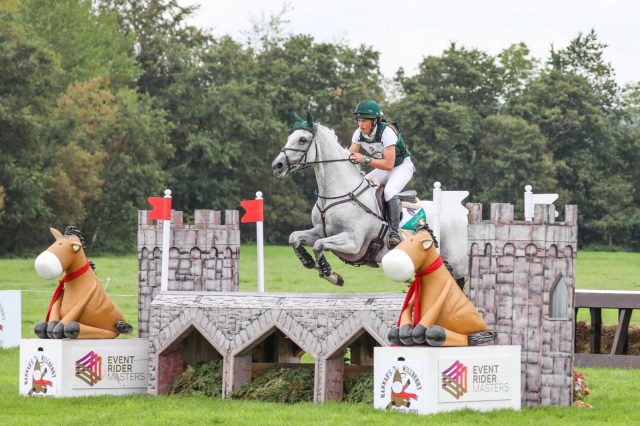 The enormous influence of the tight time allowed Sam Watson and Imperial Sky to take second place for the home nation. They delivered a 27.5 first-phase mark and were one of only two combinations to finish on their dressage score, catapulting them from seventh place to the podium after Sam romped home exactly on the optimum time.

“I’m happy because I didn’t leave anything behind out there, and the horse didn’t either – so I was beaten, I didn’t lose [the win],” he said. “It’s great to be here, on home soil and with an Irish crowd and everything.”

But Sam, who juggles running a busy yard with spearheading equestrian statistics company EquiRatings, was quick to pass the baton to wife Hannah, better known as Sparks. Formerly Pippa Funnell’s competition groom, Sparks now accompanies Sam and his horses around the world, providing top-notch care, impeccable turnout, and an inimitable sunniness to the Watson team effort.

“There’s one person, and she’s about half a mile away right now, looking after the horse – Sparks is amazing. She leaves tonight to go to the European Championships and she doesn’t get to see our kids; she’s on the road for ten days,” he explained, smiling through his tears. “She just loves the horses, and they always come first – except when we’re home, then it’s kids and horses. She’s incredible – so thank you so much to her.” 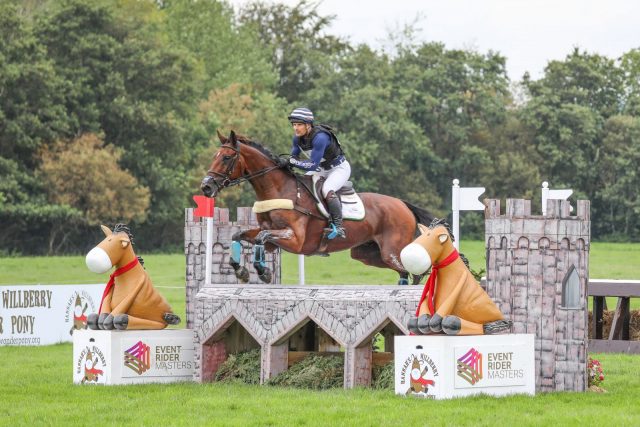 Alex Bragg and Zagreb raced away from a tough week as the only other combination to finish on their dressage score to climb from ninth to third. They were only the second combination of the day to make the time, after a masterclass from Chris Burton – ostensibly the fastest man in the world – saw him sail home comfortably within the optimum cross-country time.

“I’m thrilled to bits to be on the podium,” said Alex with a broad smile. “I have a smiley face on today! I keep saying that [Zagreb] is a good horse, and this doesn’t come as a surprise to me at all. He’s so consistent, he has the heart of a lion, and he just keeps on giving – as long as I do my job, this is where he should always be.”

Ireland’s Sarah Ennis slipped from the leading spot after showjumping down to fourth place after she and Horseware Stellor Rebound added 2.8 time penalties across the country. Normally exceptionally fast, the pair added an extra stride in the water complex – and Millstreet’s tough, quick track didn’t allow any room to catch up on the clock. But for Sarah, who piloted the experienced gelding as part of Ireland’s silver medal-winning team at the World Equestrian Games last year, it’s a promising return to competition with her long-term partner.

With just one leg left in the Event Rider Masters series, the race for the 2019 title has reached fever pitch. With leader Jonelle Price sitting the Millstreet leg out, second-placed Bill Levett and third-placed Chris Burton were both in the hunt for valuable points – and with Bill finishing fourteenth with Shannondale Titan and Burto finishing eighth with Graf Liberty, they both got them. To be precise, they each picked up enough series points that they both now sit on a tally of 73 – just six points ahead of Jonelle and five ahead of Gireg le Coz, and with no margin for error as we look ahead to Lignieres. The stage has been set for an epic showdown in France.

The final leg of the 2019 Event Rider Masters Series takes us to France’s Ligniére en Berry, where romantic villages and fairytale woodlands abut the stage for our finale showdown. It’ll take guts to find glory – but only one rider can become our 2019 champion. Who will take the top spot – and the big payout? There’s only one way to find out. Stay turned for the 2019 series final on Oct. 5-6.

A Great Day for the U.S. Contingent

Our sole U.S. combination in the ERM class, Liz Halliday-Sharp and Fernhill By Night, scored a 29.4 to sit 13th after dressage and turned in a clear show jumping round to move up to 11th, but withdrew before the final cross country phase.

Liz finished two horses in the top 10 in the CCI4*-S division: Cooley Quicksilver was 7th on a final score of 43.1, and Burghley-bound Deniro Z was 10th on 44.4. A busy lady, she was also 20th with Carpe Diem IV — heading into cross country he was her highest placed mount, sitting second, but picked up 24 time faults.

The CCI4*-S was also contested by Ariel Grald and Leamore Master Plan, who finished 18th on a final score of 50.6. The pair scored a 34.6 in dressage, then turned in a clear show jumping round followed by a cross country performance with 16 time faults. Wishing them the best of luck heading into Burghley!

In the CCI4*-L, Caroline Martin and Islandwood Captain Jack are in 5th and Will Faudree and Pfun sit 7th heading into the final show jumping phase tomorrow. Caroline added 0.4 cross country time faults to their dressage score of 37.5; Will and Pfun scored a 38.8 in dressage and a clear cross country round with no time boosted them from 20th right into the top 10 mix. 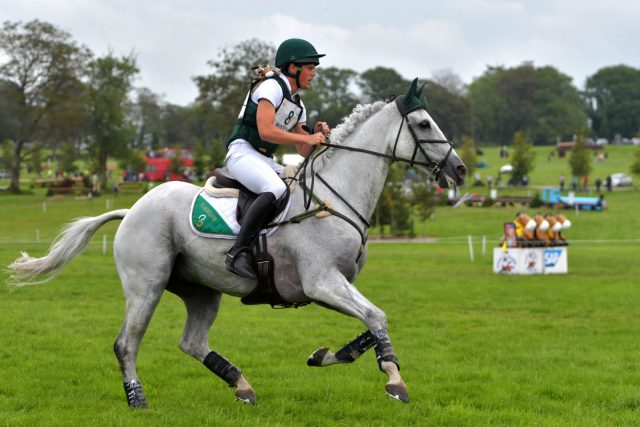 The Best of the Rest

Mrs. Chamberlain collected the prizes on behalf of Oliver as owner and breeder of Dreamliner. Dreamliner’s full brother runs in the 3* tomorrow and his sister completed the guinea pig test earlier in the week when a splint prevented them running in the competition proper.

The Connollys RED MILLS CCI4*-S concluded with another Millstreet win for Izzy Taylor (GBR) on Fonbherna Lancer. Oliver Townend (GBR) was 2nd. Regular Millstreet competitor Bubby Upton (GBR) continued her purple patch here and was 3rd on Fernhill Rockstar.  “Rocky” will retire after the competition today so it was a great end to his glittering career.  A tearful Bubby said that he had done everything she had asked of him and would now enjoy a slightly easier life.

Course designer Mike Etherington-Smith commented, “It has been a great event, the weather turned good just in time at the end of the week.  Competitors rose to the occasion, it has been fantastic to see so many lovely horses and the ERM was a great addition. The course team coped brilliantly with the conditions and it was some team effort to pull the event off.  Well done and thank you as  everyone has had to improvise as we have gone along due to the weather. It has been great to see how the competitors understood the challenges and bore with us when we were making changes.”

We are very sorry to report a horse fatality in on CCI4*-S cross country: Amazing, a 15-year-old Westphalian mare owned by Caroline Harris and ridden by Flora Harris of Great Britain, was euthanized following at catastrophic injury at fence 16C. The pair, which has had several good results at the level, had jumped clear to this point on the course; the rider was uninjured in the incident. We extend our condolences to Flora, Caroline and the horse’s connections. 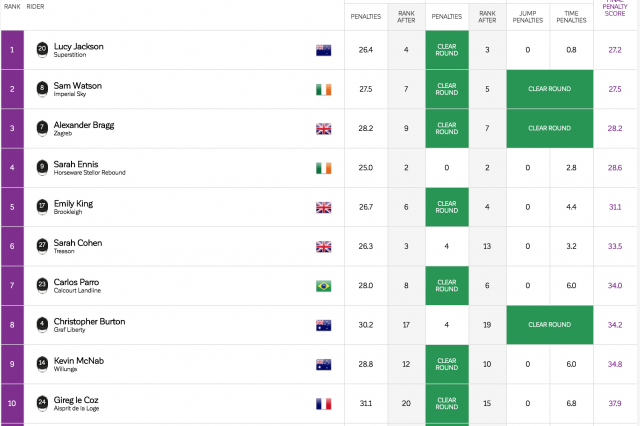