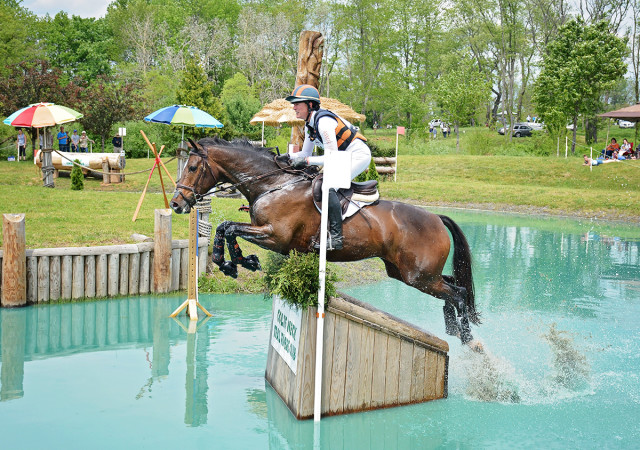 Entries for the Luhmühlen CCI4*, scheduled for June 15-18 in Germany, went live this morning with 58 total names on the list, including six American combinations.

Four of the six pairs are rerouting after retiring on cross country at one of the two spring four-stars already held this year, while the other two are exciting mares making their four-star debuts for Team USA.

Hannah Sue Burnett and Jacqueline Mars’ Harbour Pilot are rerouting from Badminton after an early runout on course at the first water complex at fence 8.

Katherine Coleman and Longwood are also rerouting from their four-star debut at Badminton after falling at fence 9, an open oxer.

Will Coleman and OBOS O’Reilly are rerouting from Rolex after retiring on course at fence 13, an open corner, in the horse’s second four-star start.

Lauren Kieffer and Meadowbrook’s Scarlett received a Land Rover/USEF competition grant to compete at Luhmühlen in the mare’s first four-star. Now 10, Scarlett has completed three CCI3* events and never place outside of the top five, including finishing fourth at Boekelo CCIO3* last year.

Marilyn Little and RF Scandalous are on yet another winning streak heading into the mare’s four-star debut. In addition to winning the Fair Hill CCI3* last fall, they won The Fork CIC3* and Jersey Fresh CIC3* this spring in the lead up to Luhmühlen.

Sharon White and Cooley On Show are rerouting from Rolex after retiring at fence 20, the Normandy Bank, in the horse’s first CCI4* start.

Riders representing 14 nations are entered in the CCI4*, along with a large field in the CIC3* for the Meßmer German National Championships, including three-time Rolex winners Michael Jung and fischerRocana FST.

Hannah Sue Burnett will also compete in the CIC3* with RF Demeter, who finished seventh in the CCI4* at Luhmühlen in 2013 with Marilyn Little in the irons.

Luhmühlen has a new cross country course designer this year in Mike Etherington-Smith, who takes over for Capt. Mark Phillips.

“The footing is looking fantastic and we’re putting the fences out. David Evans and his team are doing a great job. For me as a course designer, it is a luxury to work with such an experienced and professional team,” Mike said.

“Now it gets to the exciting stage when the fences go out and final decisions are made on distances and the feel of the course.”

EN will be bringing you wall-to-wall coverage of Luhmühlen with Leslie Wylie once again returning to the event as your boots on the ground.