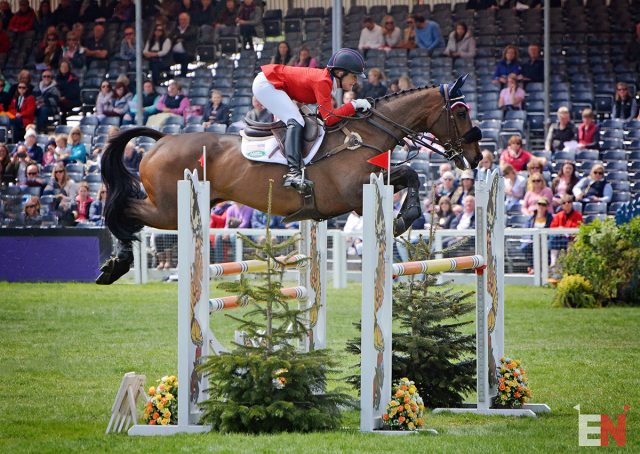 Lynn Symansky and the Donner Syndicate’s Donner completed their first Badminton Horse Trials this afternoon, pulling one rail and adding 4 time penalties to sit 23rd currently on a final score of 86.0. The top 20 will jump starting at 2:55 p.m. BST/9:55 a.m. EST.

Lynn said she thought Donner jumped spectacularly today despite losing a shoe again on the same right-front foot, just like he did yesterday during their cross country round. Losing shoes usually isn’t a problem for Donner, but that right-front shoe has definitely been stubborn this weekend.

“I had to be a little steady in the beginning and then usually I can pick up the pace as I go along, but he threw a shoe halfway around and I felt like I was yesterday — like I was on a dinner plate sliding around the corners, so I had to really go quite steady in the end, so I picked up some time unfortunately, which was a lot like yesterday,” Lynn said.

“I was a bit disappointed because it’s probably the best the horse has ever jumped for me the day after a four-star cross country, and I really felt like we could have put a clean round in. He just lost his confidence coming around some of the turns again so it was a lot like yesterday.”

With her first Badminton under her belt, Lynn said she’s already wanting to come back and better her result. “I gained a ton of experience. I think any four-star you go around you learn a little bit. I guess I would hope I would learn how to keep that right front shoe on!

“I also think, in an ideal world if I had a do-over, even with the slipping I would have taken a straight route or two and seen what happened and tried to make the score a little bit better than I had yesterday, so I’m a little bit bummed about that because I really do have a fantastic cross country horse, but he really did try so hard for me, and I could not be happier with the horse. He was unreal.”

Lynn and Donner now have one qualifying result for the 2018 World Equestrian Games on their record, and as she looks ahead to the rest of the year she is thinking of targeting a CIC3* in the summer and fall.

“I think it’s kind of a waste to run him at a CCI3*, so the only option would be to possibly bring him back to Burghley again, but that’s a lot. He trotted up fantastic today. He looks really well and I think when you have one of those horses there’s only so many chances you get, so ideally I’d like to go and have a crack at it, but you also have to think he’s 14 and this is his seventh four-star so you also have to plan for the next two or three years.“

In addition to completing seven four-stars, Lynn and Donner also now have six clear CCI4* cross country rounds on their record — another milestone for the Deer! When she compares Badminton to the other four-stars they’ve completed, Lynn said she would rank it as the most difficult.

“Compared to the (2014 World Equestrian Games) I actually think this was harder. It was tricky, it was huge and technical, and a new course designer. I did not think it was going to be easy coming into it, but it was probably the toughest track, and I think it was harder than Burghley for sure.”

Lynn had never been to Badminton as a spectator either, which she said definitely changed the experience for her a bit. “It was just really special to be able to have my first time here be when I’m competing and soak it all up. I was so proud of the horse all weekend.”

We still have one more American combination, Lauren Kieffer and Veronica, to jump in the final group. You can watch live starting at 2:55 p.m. BST/9:55 a.m. EST at this link.

This interview with Lynn and ALL the other interviews on EN from Badminton have been brought to you by the fabulous Samantha Clark. Thank you so much for following along with us this weekend. Stay tuned for the exciting finale!