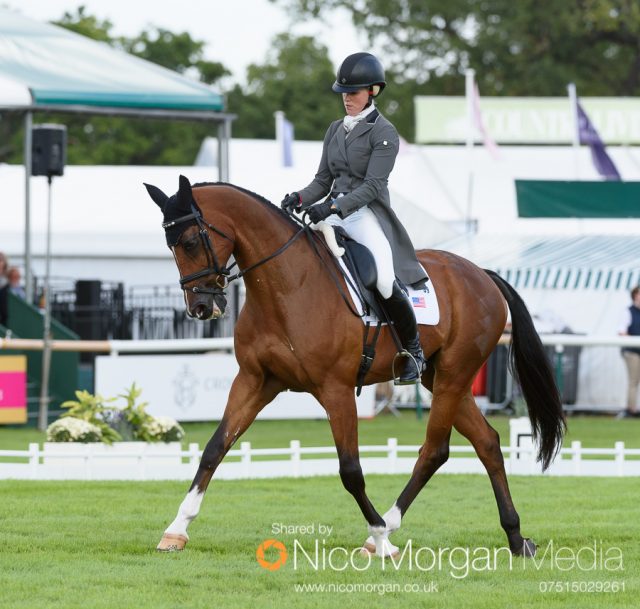 With four Americans making up the final six combinations to go on the first day of dressage at the Land Rover Burghley Horse Trials, Team USA had an action-packed afternoon here in Stamford, England. The blistering pace certainly paid off, with Mackenna Shea and her own Landioso scoring 46.1 for third place at the halfway point of the first phase.

As expected, Michael Jung and La Biosthetique Sam FBW held onto their lead from the lunch break to sit in first place overnight on 38.9, the only score in the 30s thus far. Sam, who won the event in 2015, has been noticeably nonplussed at Burghley all week, very quiet at yesterday’s trot up and not at all concerned when Chinch hopped on him for a ride after his leading test.

What is the secret to keeping Sam so relaxed? “It’s very important that he travels in a very big box, for example, so that the traveling is much more relaxed for him and he comes to the competition more relaxed. That’s the first important thing,” Michael said.

What it feels like to score a personal best at Burghley! #lrbht

You would have thought Gemma Tattersall scored in the 30s with the way the delighted crowd cheered their own on home soil after her test with Arctic Soul. Their score of 43.0 is a new personal best for the pair at CCI4* level, bettering their score of 44.6 from Badminton in 2016 and positioning them in second place overnight.

“Spike,” a 14-year-old Thoroughbred gelding (Luso X Dream Cocktail, by Roi Danzig) owned by the Soul Syndicate, is not a huge fan of large crowds, but he kept his head beautifully today, leaving Gemma “chuffed to bits” after their test.

“He’s a very, very nervous horse in the atmosphere, and he’s been very relaxed since he got here. We did the arena walk last night, and I spent ages walking him in and out and patting him and trying to get him as confident as possible,” Gemma said.

“Today he’s been out all day just walking around — a little bit of work, walking, a little bit of work, walking — and he went in the arena and instead of being backwards in the way I rode him, I tried to be really positive and actually kick him forward. It worked, and he took a big breathe and relaxed, and he managed to do the work that we know he’s actually capable of.”

Gemma and Spike already have one top-five finish at Burghley on their record from 2014, when they accumulated 11.2 time penalties on cross country. They caught the optimum time in their last two CCI4* starts, both at Badminton, and Burghley is definitely the type of course where you want to be sitting on an off-track Thoroughbred like Spike. 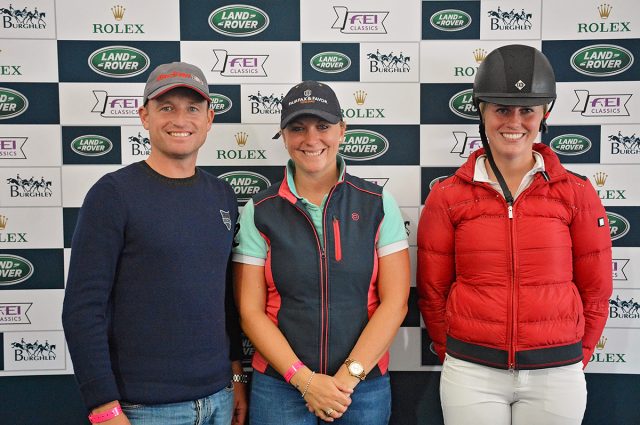 Mackenna Shea in the press conference with Michael Jung and Gemma Tattersall. Photo by Jenni Autry.

Mackenna Shea is one of America’s five Burghley debutantes, which makes her score of 46.1 with Landioso all the more impressive. “I was really happy with most of my trot work, and the canter work was pretty good. He was lot more consistent in the lateral work. I missed a flying change, but those are alwaysa hang up for me!”

It’s been a long road to Burghley for Mackenna and Landioso, her own 15-year-old Bavarian Warmblood gelding (Legendaer I X Aspen, by Pilotek), who contracted shipping fever in the spring after flying to England to contest the Bramham CCI3* Under 25.

While shipping fever but a kibosh on the Bramham plan, Mackenna thinks it ultimately turned out to be a bless in disguise to stay through the summer based with Rodney Powell and Alex Franklin, who she said has helped her tremendously on the flat.

Mackenna and “Landi” completed Kentucky last year, and now they look ahead to their biggest test yet on Saturday. “I want to go for it. My plan is to have a watch and keep up on my minutes and look after him the best I can at the same time,” she said.

“I don’t think I would be doing this if it weren’t for him. He’s super laid-back, but when I get on to ride him he’s super intense. He takes his work very seriously — all business.” 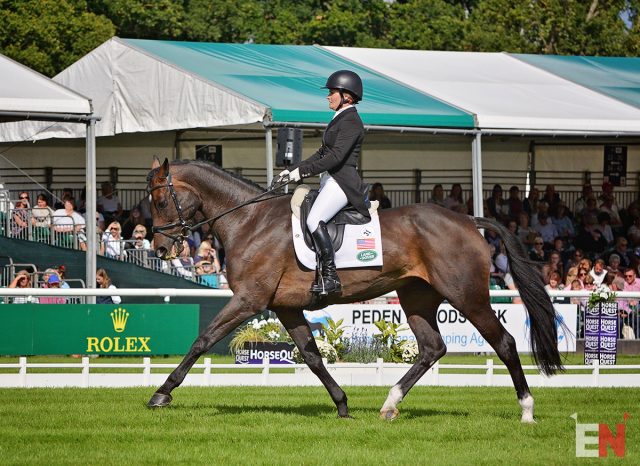 Hannah Sue Burnett and Under Suspection. Photo by Jenni Autry.

Looking to our other American pairs, Hannah Sue Burnett and Mary Ann Ghadban’s Under Suspection sit just outside the top 10 in 11th on 48.8, a bit off the pace from the mare’s four-star debut at Kentucky this spring, where she scored 45.2 and ultimately finished fifth as the USEF CCI4* National Reserve Champion.

“I feel like we could have shown off the trot a lot more,” Hannah said. “She was really quiet in this warm American weather. She always does her best, and I could have ridden better.”

Now it’s on to the fun stuff for Hannah and “Pippy,” a 13-year-old Holsteiner mare (Contender X Naomagic I, by Exorbitant xx). Hannah last competed at Burghley in 2014 aboard Harbour Pilot, who stormed around clear on cross country before being withdrawn due to an injury.

“I feel so much more experienced since then,” Hannah said. “Walking the course this year I was wondering if I would feel the same way I did when I walked it three years ago. It’s nice to not feel that way now. I feel like I can actually do this. I don’t think it’s easy, but that first time you walk Burghley is just insane, so I’m glad to not feel that many nerves.” 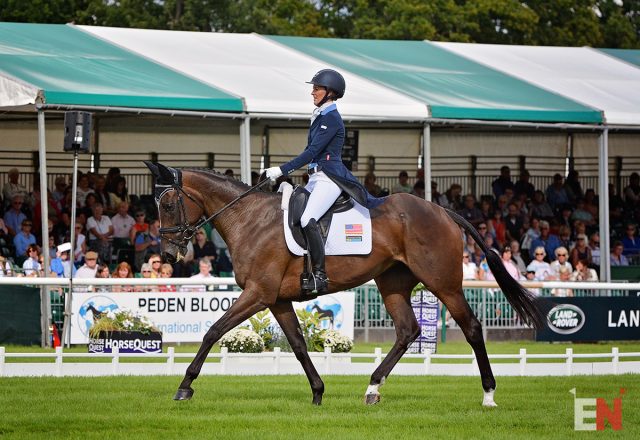 Andrea Baxter and her own Indy 500 bettered their score from Kentucky by more then 3 marks to sit in 24th place on 56.9. “My Rolex test was probably cleaner, but this had more life to it and more energy and suppleness,” she said. “I think overall her quality of work was probably better here.”

It’s a dream for Andrea to be at Burghley with “Indy,” a 12-year-old Thoroughbred mare (Cromwell X Tens of Thousands, by Spend A Buck) she produced from a 4-year-old. “I always knew she could do it, but we’ve had a few hurdles along the way. Here we are! I feel kind of starstruck. I keep looking around and staring. It’s awe-inspiring.”

Indy is not the biggest fan of right-pointed corners, which feature prominently on the straight routes on Capt. Mark Phillips’ cross country course, so Andrea said her plan for Saturday includes taking many of the lounger routes. Andrea summarized the feelings of all the Burghley newbies: “It’s definitely bigger and longer than I could imagine!” 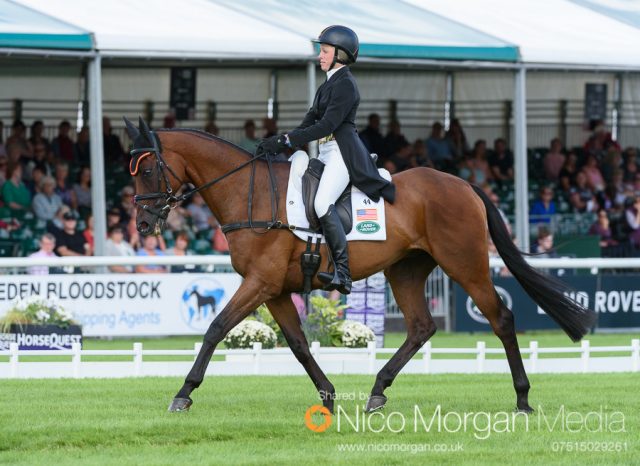 Woodge Fulton and the Full Moon Farm Syndicate’s Captain Jack were the penultimate pair to perform today in front of the ground jury of Harry Payne, Martin Plewa and Katarzyna Konarska, scoring 68.9 for 31st place.

“He’s definitely not a dressage horse, which I know and I love him anyway,” Woodge said. “I have him more for Saturday than I do for today, but he held it together and that’s the best we can do. A lot of the time it starts to unravel and we get high 70s and low 80s, so I was really proud of him today.”

Woodge and Captain Jack, a 14-year-old Thoroughbred gelding (Numerous X Lady Malone), didn’t cross an ocean to do dressage. After checking a big bucket list item when she completed her first four-star at Kentucky in the spring, now 22-year-old Woodge is ready to take on her biggest challenge yet.

“It’s a lot bigger than Kentucky, but I’m hopeful because he loves to gallop,” she said. “I know he’ll get tired, but he has a heart of gold, so if I don’t let him down, he won’t let me down.

We have four more American combinations still to come tomorrow. You can watch live on Burghley’s Facebook page, and you can also re-watch today’s action on the Facebook page. Click here for a full list of dressage ride times.

Stay tuned for much more from Burghley, including EN’s official course preview starring Jonty Evans. Many thanks to intrepid EN reporter Tilly Berendt for taking us behind the scenes in the Burghley warm-up today, and to Nico Morgan for providing beautiful photos. Go Eventing.