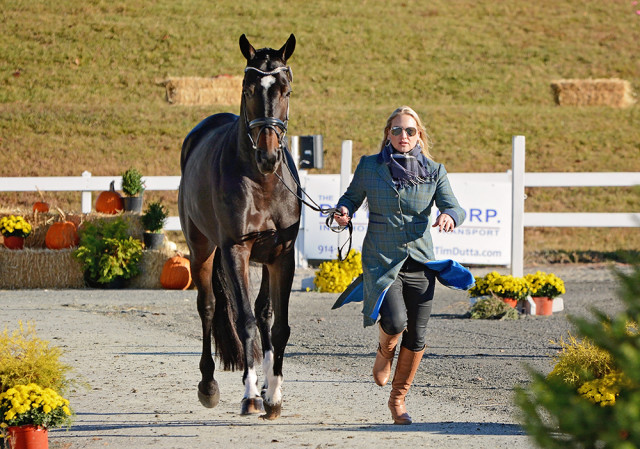 Marilyn Little has released a statement amidst an outpouring of public concern over the amount of blood seen in RF West Indie’s mouth during their cross country round at the Dutta Corp Fair Hill International CCI3* earlier this month.

That statement reads as follows:

“The well being of my horses has always been and continues to be my top priority and concern. My team and I are aware of the recent comments and concerns regarding an occurrence which took place at Fair Hill and do not take any situation affecting the welfare of my horses lightly.”

“After dismounting following my cross country round at Fair Hill, I noticed a bit of blood coming from my horse’s mouth, that I had been unable to see while mounted. This was very concerning to me and I immediately sought veterinary care by both the FEI vets on hand, and my personal veterinarian who was also on site.

“After examination, the veterinarians and officials on hand determined the source of blood had resulted from my horse’s cheek being pinched, creating a small cut. The bleeding quickly resolved, and the vets concluded no further treatment was necessary.

“I strongly support the FEI and the carefully constructed protocol they have put in place for times such as this to assure the well being and safety of our equine partners. My team and I will be doing everything possible to avoid anything similar to this occurrence taking place in the future and appreciate everyone’s concern.”

EN contacted the FEI after Fair Hill in regards to the incident. An FEI spokesperson responded to EN today with the following statement:

“The FEI and the United States Equestrian Federation regards the welfare of our equine partners as paramount.

“Pain or injury in any form is cause for concern and we have systems in place to make sure that trained officials are involved in cases such as the one at Fair Hill.

“The FEI rule governing the situation in clear and reads as follows:

“Blood on Horses may be an indication of abuse of the Horse and must be reviewed case by case by the Ground Jury.

“In minor cases of blood in the mouth, such as where a Horse appears to have bitten its tongue or lip, or minor bleeding on limbs, after investigation the Ground Jury may authorize the Athlete to continue.

“It is possible for a horse to bite its tongue without affecting its performance or being painful, just as this can happen with a human athlete.

“When Marilyn Little’s horse RF West Indie crossed the finish line, it was evaluated by the President of the Ground Jury and the FEI Veterinary Delegate.

“The examination determined that a small cut had been caused by the bit and noseband combination pinching the horse’s lip. The cut was treated and the bleeding resolved quickly. “

Jonathan Clissold, the FEI technical delegate at Fair Hill, told EN: “In the case of RF West Indie’s mouth, it was looked into by the ground jury and vets at the finish, and there were no signs of blood or abuse.”

The Fair Hill incident raises questions about FEI rule 526.4, which governs how situations regarding visible blood on a horse are addressed on the field of play.

In a time when the horse’s welfare is in the spotlight in our sport, should this rule be strengthened? Should a horse with visible blood in its mouth be immediately pulled up and examined? Or should visible blood on the horse be solely left to the discretion of the ground jury?

Stay tuned for more on FEI Rule 526.4 as EN continues to examine the matter.

What do you think, EN? Weigh in with your thoughts in the comments below.

This post has been updated with a statement from Jonathan Clissold, the FEI technical delegate at Fair Hill.