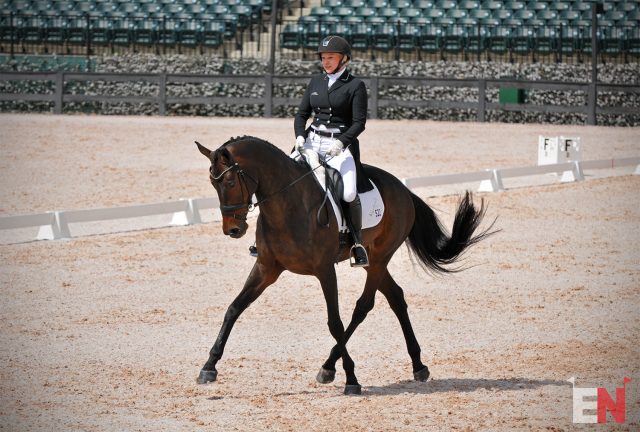 We’re excited to be here at the Tryon International Equestrian Center for the first running of The Fork Horse Trials, presented by Lucky Clays Farm, at its new location in Mill Spring, NC. Much will be revealed this week as we will see some of the country’s top horses here for their final prep run before Rolex Kentucky, and we will of course watch the first horses gallop over what will be the site of the 2018 World Equestrian Games cross country track.

Twenty CIC3* pairs competed in front of judges Christian Landolt (SUI) and Gretchen Butts (USA) this morning. A cold front blew in with yesterday’s thunderstorms and a strong, cold wind combined with flapping flags and big atmosphere in the George Morris Arena had some of the horses feeling a bit tense, resulting in some higher than usual scores than we typically see from some of these combinations. Overall, the scores were 2.21 points higher than expected.

Marilyn Little and RF Scandalous, however, turned in a lovely, fluid test to score a 41.7 and take the lead in the Adequan USEA Gold Cup qualifier. This is the third time in four three-star appearances that this pair have scored under 42.0, but still Marilyn felt she was riding somewhat conservatively.

“I was really pleased with her and I thought she did a good job,” Marilyn said. “I’m coming from very warm weather and it’s quite chilly and windy. I wouldn’t have blamed her if she had been a little fresh, but she was very focused and she did a nice test. I could have ridden her probably up a little more. I was maybe a little conservative thinking there could be some effects (from the cold).”

Over the winter in Wellington, Fla. Marilyn has been working with Kitty on bringing her frame up more consistently as well as getting her more on the aids for flying changes so she doesn’t anticipate that movement. In today’s test Marilyn was especially pleased with their second flying change and felt it was what they had been working towards.

Marilyn is looking to complete their first full run of the year with “Kitty,” a 12-year-old Oldenburg mare owned by Jacqueline Mars, Robin Parsky, and Phoebe and Michael Manders. In Florida, she’s had to get creative with the mare’s conditioning schedule and will take time to assess her fitness on cross country Sunday.

“Some of the horses that you’re going to see have been going since January and February. She’s been in Wellington the whole time, so the gallops and the fitness have been a little bit creative. She’s been galloping out in the everglades on the dykes and very much on the flat,” Marilyn said.

“We’ll see what her fitness is here, but regardless it’s her first run of the year so we’re looking for a good start to her season and to get a nice tour and see what’s out there so we all have an idea of what’s coming, what the plans are and where the course is for the moment.” 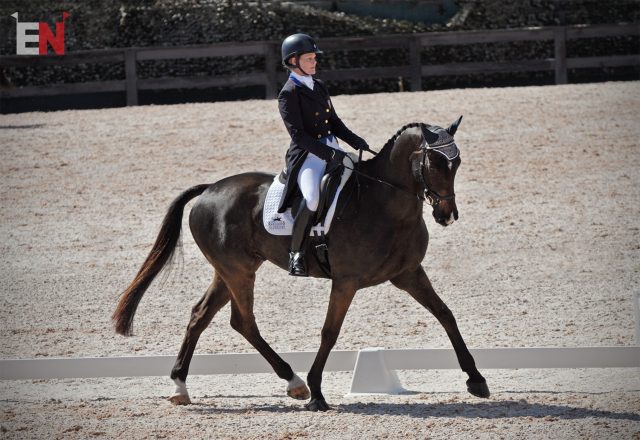 Kim Severson and the Cross Syndicate’s Cooley Cross Border are second after dressage with a 43.7. The 10-year-old Irish Sport Horse is entered in his first four-star at Rolex, but Kim had been leaning towards another three-star to confirm his changes and develop his base of fitness. Packy McGaughan has been helping Kim with her flatwork recently, and she said she was pleased with Cross today, particularly in his lateral work. She’s also been working to get him more expressive and powerful in the ring and said the atmosphere at TIEC probably helped.

“He’s almost dare I say a little bit better in something like because he’s a pretty quiet horse. I think he gets a little introverted so he was actually really good and good on the aids,” she said. “This show is going to dictate if we think we’re going to go to Kentucky or not. He was great at Carolina International so I’m going to see how he is. Hopefully he’s going to be good and come out better for it.”

Phillip Dutton was competing at Burghley last year during the USEA American Eventing Championship so this is his first visit to Tryon. “It’s great to be here and it was worth the trip here to have the horses in this main arena,” he said. “It’s great preparation for bigger events to come.”

Phillip is riding four horses in the CIC3*, three of which that are entered at Rolex. Phillip said he was pleased with all of his horses, particularly since the rain yesterday wasn’t an ideal preparation for them at a new venue.

Fernhill Revelation, aka “Warren”, is a relatively new ride for Phillip, and the Revelation Group’s 11-year-old Irish Sport Horse turned in the best score of Phillip’s four rides. A 48.3 is a 3.2 point improvement over their test at Red Hills and put them in third place. “Like Marilyn I was riding a little conservative to try and make it a mistake free test,” said Phillip, who is aiming “Warren” at the Tattersalls CCI3* in June. “I’m excited about (Warren) and the future. I think he’s going to be pretty smart on the flat.”

Phillip and Fernhill Fugitive, a 12-year-old Irish Sport Horse owned by Thomas Tierney and Ann Jones, scored a 51.5 for seventh place. Phillip is once again campaigning Kristine and John Norton’s 13-year-old Dutch Warmblood I’m Sew Ready. His regular rider Kristin Bond has recently given birth to her second child and will take the ride back after Rolex. Phillip and I’m Sew Ready scored 53.7 to tie for tenth. We also welcomed back The Mr. Medicott Syndicate’s Mr. Medicott for his first FEI appearance since early 2015. A 54.7 for Phillip and the 18-year-old Irish Sport Horse puts this pair in 12th after the first phase. 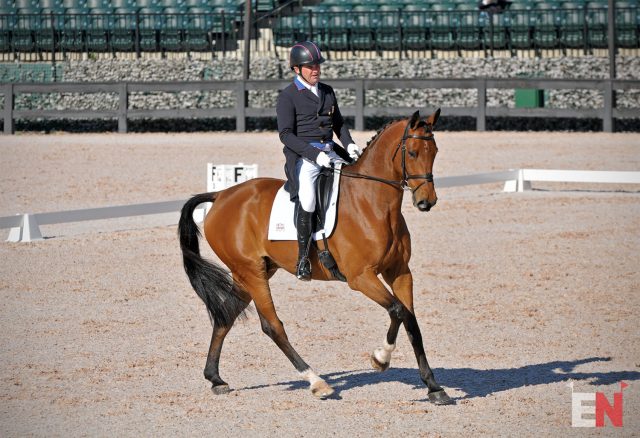 Sitting fourth after dressage is Selena O’Hanlon and John and Judy Rumble’s 14-year-old Canadian Sport Horse Foxwood High on a score of 49.6. Sara Kozumplik Murphy and Rubens D’Ysieux, a 12-year-old Selle Français owned by the Rubens D’Ysieux Syndicate, scored 50.6 for fifth place. Doug Payne and his and Jessica Payne and Debi Crowley’s 13-year-old Trakehner Vandiver are not far off in sixth with a 50.9.

Caroline Martin was stopped early in her test with Pebbly Maximus after it was noticed that he had pink saliva in his mouth. They were ultimately eliminated and The Fork released the following statement from the ground jury:

“Although there was no rough riding nor any major wound upon vet inspection the amount of blood was unacceptable. Regrettably we had to apply the FEI blood rule. Therefore, we did not allow her to continue.” 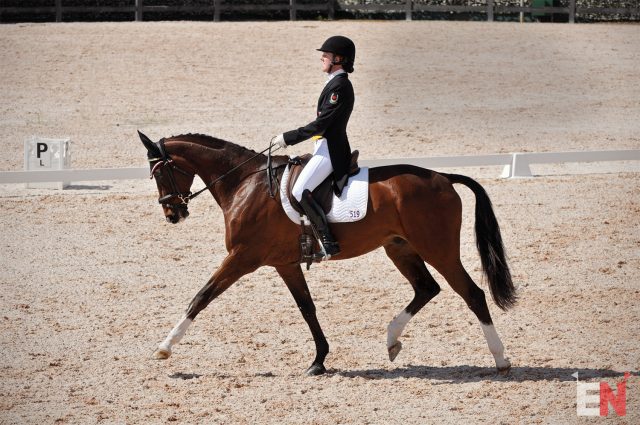 The CIC3* horses will have a day to relax before show jumping on Friday. Cross country will be the final phase on Sunday, and we’re all looking forward to seeing the course designed by Captain Mark Phillips and Tremaine Cooper.

“It’s very impressive and obviously they’ve got a long range plan and we’re in the early part of it,” Phillip said. “We’ll just be trying to give the horses a good positive run without going too fast.”

The Advanced A division, made up completely of Rolex-bound combinations, competed this morning as well. Liz Halliday-Sharp and Fernhill By Night lead on 25.9. Jordan Linstedt and Revitavet Capato are leading the Advanced B division on 31.5.

Cornelia Dorr and Louis M are the leaders of the CIC2* with a 38.9. Allison Springer and Lord Willing scored a 42.3 for second place and Liz Halliday-Sharp and Deniro Z are close behind on 42.5.

Boyd Martin and Long Island T are the leaders of the CIC* division on a 36.1 as the only combination to score better than 40. Valerie Vizcarrando and Favian are second after dressage on 41.9, and Boyd rounds out the top three on 44.0 with The Fonz Himself. 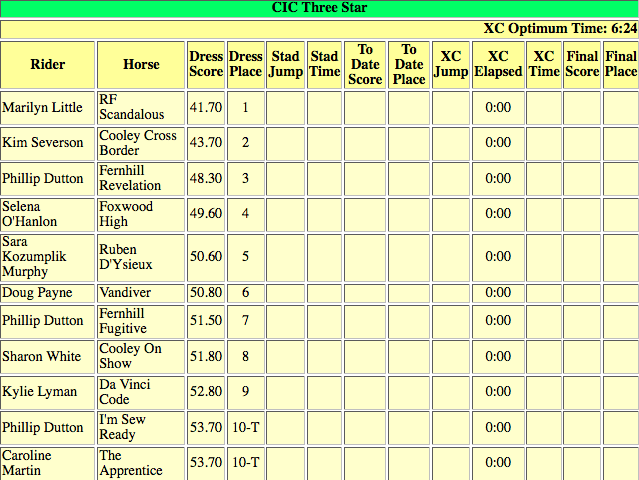