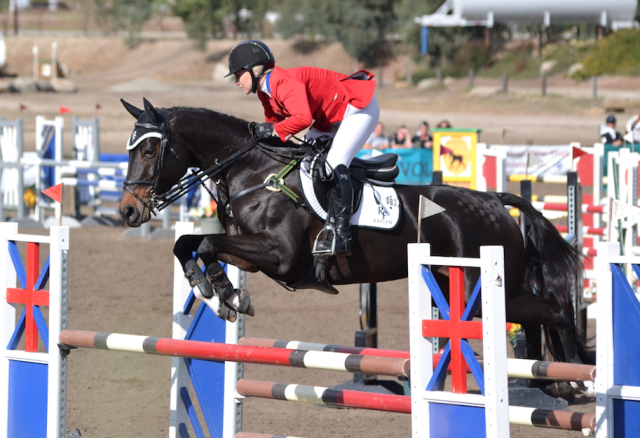 Marilyn Little entered five horses in the Poplar Place CIC3* in Hamilton, Georgia and has a firm hold on the top of the leaderboard after producing four clear show jumping rounds today to secure the top four placings before cross country. Raylyn Farm’s, LLC’s RF West Indie moved into the lead from third place with a double-clear round in her first three-star appearance.

Dressage leader and Pan Am individual gold medalist RF Scandalous was unfortunately eliminated when she and Marilyn parted ways just one fence from the end of the show jumping course, bringing the mare’s first attempt at a three-star to an early end.

“She was going so beautifully, jumping a lovely rub free clear round and just had a misstep two strides before 11a,” Marilyn said of the 10-year-old Oldenburg owned by Raylyn Farms, Inc and Phoebe and Michael Manders. Marilyn is unsure what caused the misstep, but by the time “Kitty” had righted herself, there was no room to jump and she was forced to pull out quickly. Between the trip and sudden change in direction, Marilyn was unseated.

“I’m so upset for her. She was jumping her heart out and was only one from home, and this would have been a big blow to her confidence, but we’ll patch it up and move on.”

Downtown Harrison in the CIC 3* at Poplar

Jonathan Holling and Constance Holling’s Downtown Harrison are putting the pressure on Marilyn’s remaining rides. They are currently in fifth place, have added a single time penalty to position them a fraction of a point behind RF Quarterman. Check out their round in the video above. 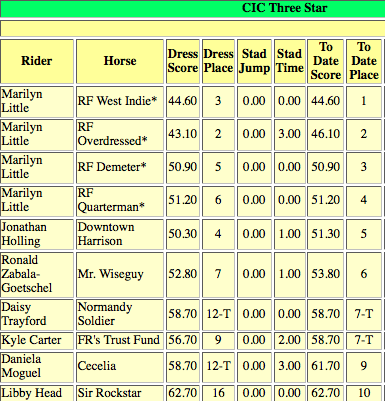 All divisions will tackle Tremaine Cooper’s cross country course tomorrow and we’ll be back with final results, so stay tuned!