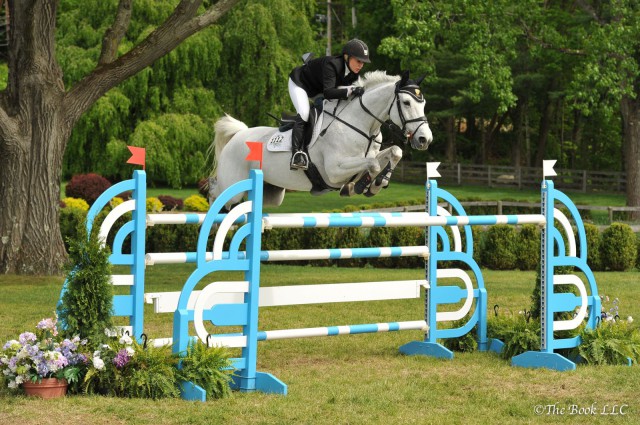 Marilyn was riding Clearwater, a 2007 Holsteiner gelding (by Clearway x Come On) owned by Karen O’Connor, and the pair had a flawless first round Sunday afternoon which sifted them to the top of a pack of 39 horses and earned them a slot in the jump-off against six other clear round competitors.

Maclain Ward had two horses in the class and both made the jump off: his veteran Rothchild, and a new Grand Prix horse soon to be a fixture of the scene, Tina La Boheme, a 2007 Selle Francais mare owned by the rider and Artie Hawkins. 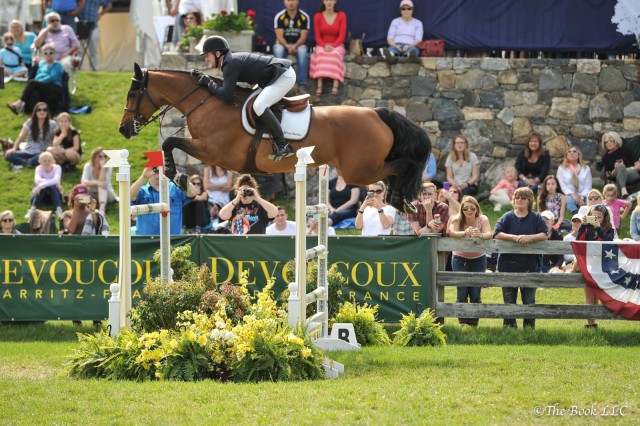 Rothchild put in an incredibly fast jump off time of 40.42 seconds, but had an uncharacteristic rail down which cost them a shot at victory. With his second mount, he had a slower but more meticulous round that left the rails in the cups with a time of 44.62.

Leslie Howard was also able to produce a clear round but with a much slower time of 48.34 with her mount, Gentille Van Spieveld.

Marilyn was sandwiched between Ward’s jump off rides, and had a pretty good idea of what she’d have to do to win. She put in a lightning fast round with the stunning gray, and victory was in her grasp until she brought down a rail at the very last fence, leaving her with four faults and a time of 42.28.

“When you have McLain [going after] you, it’s never easy,” she said. “I wanted to be quick, but I thought I’d go a little wide to the last one and I let the stride get too flat and we wilted a little. When you’re in company like this, there is no room for error.”

Nonetheless, the performance was good enough for fourth and a generous check for $13,000.

McLain’s new young mount proved to be the victor with her slower but careful round, with Leslie Howard second with the only other clean jump-off round of the day, and McLain and Rothchild third.

You can get links to full results, additional interviews, and more behind-the-scenes fun from Old Salem Farm and other jumper shows around the country at our sister site, Jumper Nation.

Congratulations Marilyn, and we’ll see you on the flipside on the cross country course soon!