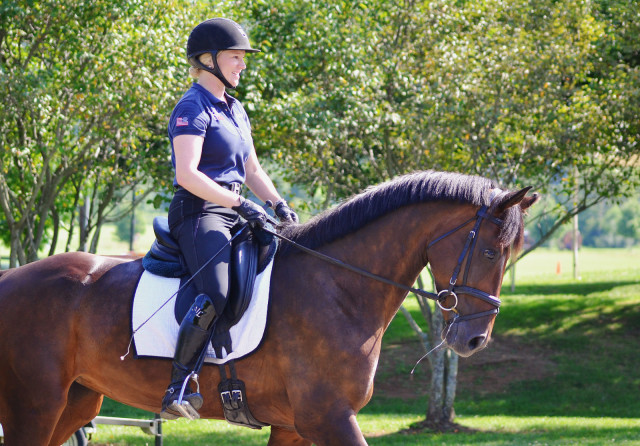 Marilyn Little has welcomed RF Scandalous, a 9-year-old Oldenburg mare owned by Raylyn Farms and Phoebe and Michael Manders, into her barn as her newest upper-level prospect. Previously campaigned in Germany by amateur rider Vivien Reddig in eventing, dressage and show jumping, Marilyn found the mare on a shopping trip to Europe in May.

“She comes from an amateur rider who competed her to the one-star level but didn’t particularly love jumping because she said it makes her nervous, but she’s a very good rider on the flat who gave Scandalous a wonderful base,” Marilyn said. “So many times when you start a partnership with a horse, you have to figure out the former rider’s habits — if they are stiffer to one direction because the rider is. That’s not the case because her rider was so talented.”

Named Cayanoa before Marilyn changed her name to RF Scandalous, the mare is by Carry Gold out of Richardia by Lario, bred by Horst Bührmann in Germany. She has a nice blend of dressage and jumper bloodlines, and Marilyn said she has had other Carry Gold offspring and really loves the breeding.

“She’s in a place where she’s ready to go and become an upper-level horse,” Marilyn said. “It’s an exciting time because of her age; she’s very mature and can move along quickly. The things that make her a little nervous are my strengths, and she’s giving me a huge amount of confidence in the dressage ring. I can actually practice a four-star test on her. She helps me work some things out in the dressage, and I have another horse to practice on in addition to (RF Demeter).”

The mare has Preliminary level qualifications from Germany, where she completed more than 25 events, and Marilyn is working with Shealagh Costello, USEF director of eventing national programs, to try to bring those qualifications to the U.S. In the meantime, Scandalous has competed twice in the U.S. since clearing quarantine on June 25, winning Training at Olney Farm earlier this month on 28.1 and Preliminary at Fair Hill on 26 last weekend.

“She got out of quarantine the week before Great Meadow, so I took her for a little spin on the cross-country course and through the water,” Marilyn said. “Then she went to Olney and was great there — solid cross country, a little nervous in show jumping and in the box, but a real soldier in dressage.

“We went home after that and did some things I thought would help her. At Fair Hill, she was great again on the flat and much more confident cross country. There’s no perfect horse, but she gives you that feeling that she should be. She really reads the jumps so well and is very intelligent.”

If Marilyn can transfer the qualifications she needs, she plans to aim Scandalous at the Dutta Corp Fair Hill International CCI2* this fall, with the ultimate goal being to go for a spot on the U.S. Pan American Games team for next year. “Based on the feeling I have after these last two events, I feel she’s ready to move on up the levels,” Marilyn said.

A striking mare, Scandalous is a bit unique in that she is missing part of her left ear, which Marilyn said she forgot to tell new owner Phoebe Manders when she came to see the mare in quarantine. “She saw the right side of her face and then saw the other side and was shocked,” Marilyn said.

And as for a barn name, Marilyn settled on “Kitty,” as the mare is graceful, independent and opinionated like a cat. “They couldn’t flex her behind when we vetted her because she was a bit temperamental about it,” Marilyn said. “We also couldn’t touch her head at first. Now we can get a bridle and bonnet on her without an issue. She’s warming up to us now; she’s definitely a character.”

We wish all the best to Marilyn and Kitty as they build a partnership together and work toward competing at Fair Hill this fall. Be sure to watch the video of Marilyn trying the mare in Germany above, as well as the video of their dressage test at Olney on Aug. 2, which scored 28.1. Go Kitty!