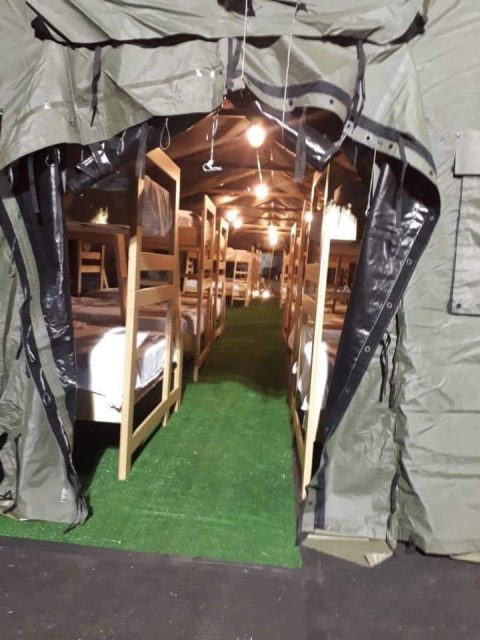 As the athletes and their teams began to arrive and settle in at the Tryon International Equestrian Center for the 2018 FEI World Equestrian Games last week, there was an immediate concern regarding inadequate accommodations for the grooms who traveled with them.

It was expected that on-site, permanent housing would be available for grooms, but instead grooms were offered bunk beds in temporary tents. With Hurricane Florence expected to bring heavy rain to the Mill Spring, North Carolina area later this week, concerns have also been raised over the safety of the tents.

“I made a personal commitment to housing grooms on-site and I underestimated the demand. I was too optimistic. I made a mistake and I apologize. We are doing everything we can to rectify the situation,” Mark said.  “Our organization has always been committed to recognizing the importance of grooms. They are a critical component to the success and well-being of these equine athletes and we have the utmost respect for their daily work.”

He continued: “Without our grooms there would be no equestrian sport. You have my word that we will resolve all issues related to the grooms accommodations. We at TIEC, and the FEI, have enormous respect for the grooms and the vital work that they do. It is our greatest commitment to ensure the safety and well-being of the horses competing and the individuals who are responsible for their care.”

According to the statement, TIEC has been working on alternative options, including setting up on-site RVs and two-bed cabins with a toilet and shower. They have also arranged off-site accommodations at Rumbling Bald Resort with daily shuttles to the venue and are offering compensation for any off-site housing arrangements made by National Federations.

Images and video footage of the bunk beds set up in temporary tents have attracted particular attention on social media.

Mark responded: “We were asked by the National Federations to provide more on-site options and explored providing, as a very temporary solution, air-conditioned dormitory tents with showers and bathrooms provided close by until more RVs and cabins are available. However, this option has clearly not met our stringent standards. We are aware that it is not viable in the long-term and are urgently seeking alternatives.

“The National Federations and the FEI are working extremely closely with our team to ensure that our grooms are treated with the respect they deserve and given the opportunity to choose an environment that suits them and their horses best.”

The EN team arrives on the grounds at Tryon tomorrow and will bring you full reports on ongoing construction at the venue, as well as updates on housing for the grooms. Keep it locked on EN for the latest and greatest from WEG.