Cross-country with Heather Morris and Slate River: Heather Morris and Slate river hail from Texas and placed 11th at the FHI CCI***.  Before going out to the cross-country course, Heather’s team brought a variety of very large bits to US Coach Mark Phillips for his selection.  But Mark asked Heather to show her transitions within the gallop using just a snaffle.  The horse generally ignored Heather and threw its head everywhere.  After a few transitions Mark called Heather in and hopped on slate river himself. 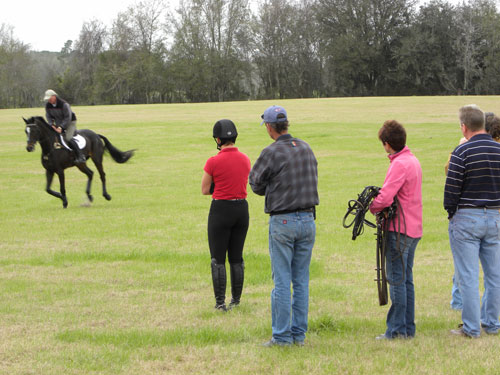 The horse immediately improved, and Mark explained that Heather needed to carry her hands several inches lower, with her knuckles pressed into Slate River’s withers.  That encourages a more forward rider position and means that when the horse pulls or fights it is fighting with pressure on its withers rather than the rider.  Mark kept his hands pressed into the withers and his body forward throughout the entire rebalancing process.  He explained that Heather was sitting back too much and just fighting with the horse’s mouth.    Once Heather hopped back on and tried this approach, Slate River was 100% better.
As a rider who does not keep my reins bridged or my hands pressed to the withers through the half-halt, I might start trying that because that method worked really great in this lesson and when Mark had riders try it in the USEA clinics.
Olivia Loiacono and Subway: Many of the pairs that Mark had seen jump before and liked as jumpers did flatwork for a second straight day today.  Mark hopped on Subway for a few minutes early in the lesson and commented that he really liked the horse.  In the trot, Mark suggested that Olivia balance Subway up and out by asking him to trot on spot for a maximum of three strides, but stressed that this exercise must never be ‘backwards.’  For the canter, Mark reiterated a point that he has made in several lessons that the horse should not be too bent in the counter-canter.  Mark also felt very strongly that flying changes should be schooled on a straight line. 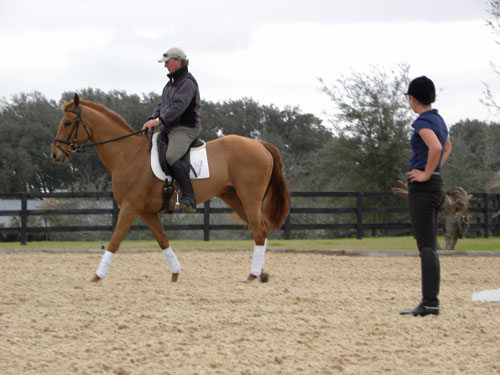