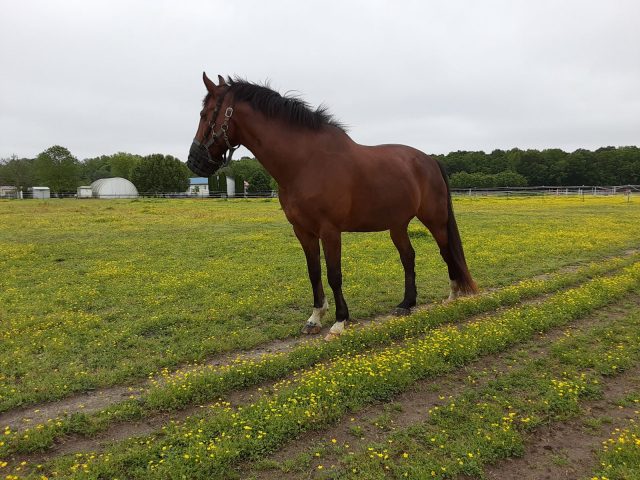 I, Grassius. Photo by Holly Covey.

If you have a chunky monkey sort of horse who comes with a built-in vacuum appetite, you look around at spring time and admire the beauty. Then you go dig out the grass muzzle.

Event Horse has one of those “All In” appetites. His draft cross breeding gives him a handsome physique, corresponding workmanlike appetite, and the capacity to eat to oblivion — it’s a real contrast with the horses he is pastured among. Both the retired Standardbred racehorse and a large 17-hand Thoroughbred actually need the spring grass to cover their ribs after winter, but other than a little bit more rib fat, neither change much once the grass starts growing, and they don’t gorge like Event Horse.

So after a Kentucky Three-Day Event trip one year, I came home to a funny set of slightly puffy front pasterns, and immediately put Event Horse in front feet ice, called the vet, and cried. Because I knew what happened — it was the dreaded founder, or also known as laminitis. It’s not just a fat-pony disease!

Horses over age 10, easy keepers, or suffering from insulin resistance are especially susceptible to laminitis. This is a disease that pinpoints the sensitive laminae inside the hoof, causes a metabolic overload, and destroys the blood-rich sections of the laminae that connect the coffin bone to the hoof structure. As you can imagine, it’s extremely painful, dangerous to the future use of the horse, and hard to correct once the metabolic dominoes begin to fall. Catching it quickly and early is your only real hope, they say.

Grass, ordinary old grass, causes this. And here’s the reason. Most pastures have multiple varieties of grasses, some called cool season grasses that grow fast and early, and some warm season grasses that do better in hot summer. This is what keeps your pasture green for so many months.

What researchers have found is cool season grasses are built to grow fast and quick. When they take off in spring, they create a bit of danger when they store high levels of carbohydrates due to photosynthesis. The carb stored the most in spring is fructan, while later in the year, the carb most often stored is starch.

So the big concern is the early season grasses store the fructan, that the horses, like Event Horse, overdo on when spring grass gets wailing along. When we all get too much sugar, you know it can’t be good. And the process begins to get the susceptible horse into the laminitis pathway.

When the sugar overloads, naturally occurring insulin moves the excess sugar into the horses’ tissues for use by muscles, etc. Then in the case of sugar overload, insulin goes wacky, and blood flow to the hoof is increased and inflammation sets into the laminae.  The problem with this happening in the hoof is that this is a one-way vessel. The inflammation and disruption in the hoof makes for a very dangerous situation that can result in coffin bone rotation and permanent lameness. Eeek!

This is a real layman’s explanation, and I’ve oversimplified, but suffice it to say, if you value your event horse, you really do not want them to overdo on spring grass!

Let’s let the experts take it from here:

So, back at the Home Turf, we were quite lucky to see on ex-ray of his front feet, that Event Horse was just in a very initial stage of threat, and continued icing and medication and complete stall rest with no grain and no grass for two weeks helped us to return him to soundness. I also changed his grass consumption habits at that time and will forever be cautious about his spring turnout and other over-indulgences that could open the pathways to laminitis again. I am ever vigilant.

I annually ex-ray him and we don’t see much in the way of changes, but I learned my lesson. Now each spring, I have a protocol for I, Grassius. He must go out only for a short time. He goes out early. He comes in early. He stays in barn more than the others. He is monitored with a weight tape. I try to keep him conditioning going to work off the excess carbs. We drop the grain. And … we apply the dreaded Grass Jail. I should write this in all caps, “GRASS JAIL,” as he refers to it.

Grass Jail is Event Horse’s word for the muzzle. It’s a good accessory for this problem, meant to limit the grass he intakes, at least, that’s the idea. Wearing it allows him the comfort of being with pals and turnout as usual in his favorite pasture, but keeps the actual amount he is eating limited. I bought it from a friend, used, but sturdy and clean. I went through the online ordered ones as Event Horse found them easily removeable and quite frail when he applied his classic jailbreak techniques.

These include rubbing it off on the side of the shed, scraping it along the ground, tossing his head extensively till it flies off into the sunset, and scratching it over his ears on the butts or sides of the two horses he is pastured with. And a few other techniques I haven’t been able to catalog. Just found the fractured muzzle forlornly sitting in the pasture, abandoned. Darn.

Muzzles are not the ideal situation because some horses learn to eat right through them very well, and gobble along making the best of it. Event Horse isn’t one of those. The muzzle makes him very sad. He can drink with it. But mostly he stands, shamed, waiting for me to come and take it off. He gives up.

He finds the muzzle I currently use to be extensively difficult to remove. It blows his mind. At first, he pawed. Then tried every trick he learned with lesser muzzles. He went to his friends and asked for their help (They were pretty neutral. I think it’s like, “you get so much more than we do, you’re on your own here, pal.”) He pawed some more. He went to drink some water. He drug it in the dirt afterwards, making a nice mud paddy in it to lick.

And other stuff, none of which really worked. He’s a smart horse but this one got him stumped. I’ve tried to coach him, by putting grass stems through the hole by the bottom, showing him how to do it. Nope. It’s just jail and I’m stuck in here.

The reason why is it fits well, it allows him to use his lips and mouth and jaw normally, but just can’t make big honking grass bites and this is hugely concerning to him. Stuffing his mouth is really his finest skill, and it hurts him in his heart (and stomach) not to be able to practice this particular way of eating each spring. He dreams of this all winter, I am sure. (With his nightmare being the Grass Jail muzzle.)

So we are here in deep spring, I writing this, looking out the window, to three horses on the spring pasture. Two are happily grazing. One is looking forlornly in the distance, dreaming of gobbling spring grass, and cursing at me inwardly while he awaits me to come and remove it. Not a chance, fatso!