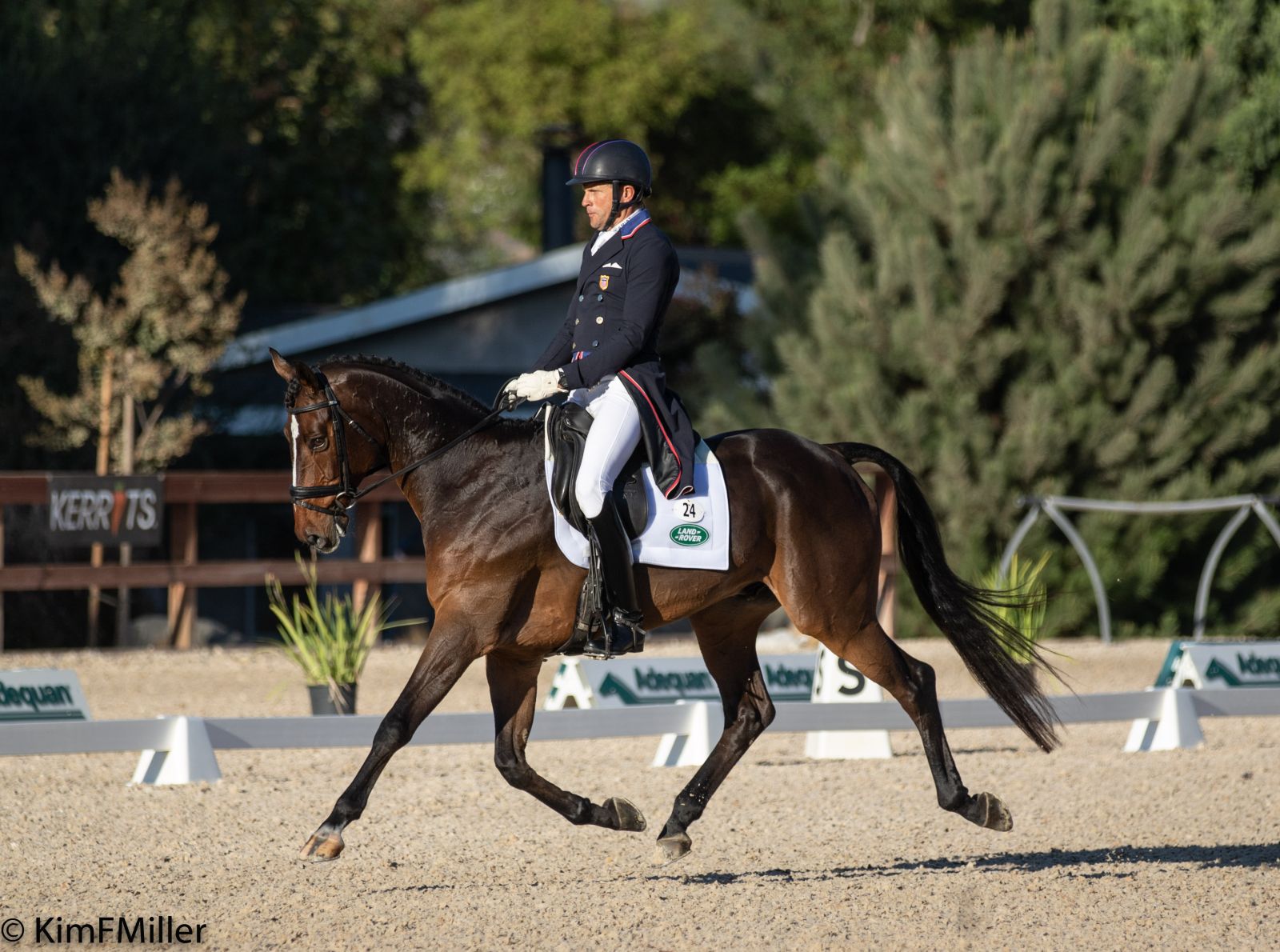 “My first horse (Long Island T) was brilliant in the warm-up and terrible in the ring, and Luke was not very good in the warm-up and a champion in the ring,” Martin said. “I prefer they do it like that.” The Luke 140 Syndicate’s Holsteiner is a “hot feisty number” who faces “a big test” tomorrow over Clayton Fredericks’ tracks as Galway Downs new course designer, said Martin.

In a nice change of scenery, Martin is among a handful of top-ranked eventers to trek from the East to compete at Galway Downs. They add to equestrian fire power fit for the venue’s rising status in the sport. “It’s a world class facility,” said Martin. “The rings are unbelievable and it’s turning into one of America’s premier event facilities.”

All of the 4* horses showed the unique combination of power and elegance required for wins at this level. Where there were gaffes and glitches — most notably in a few flying changes — they illustrated how tough it is to balance those two characteristics even though several pairs made it look easy. 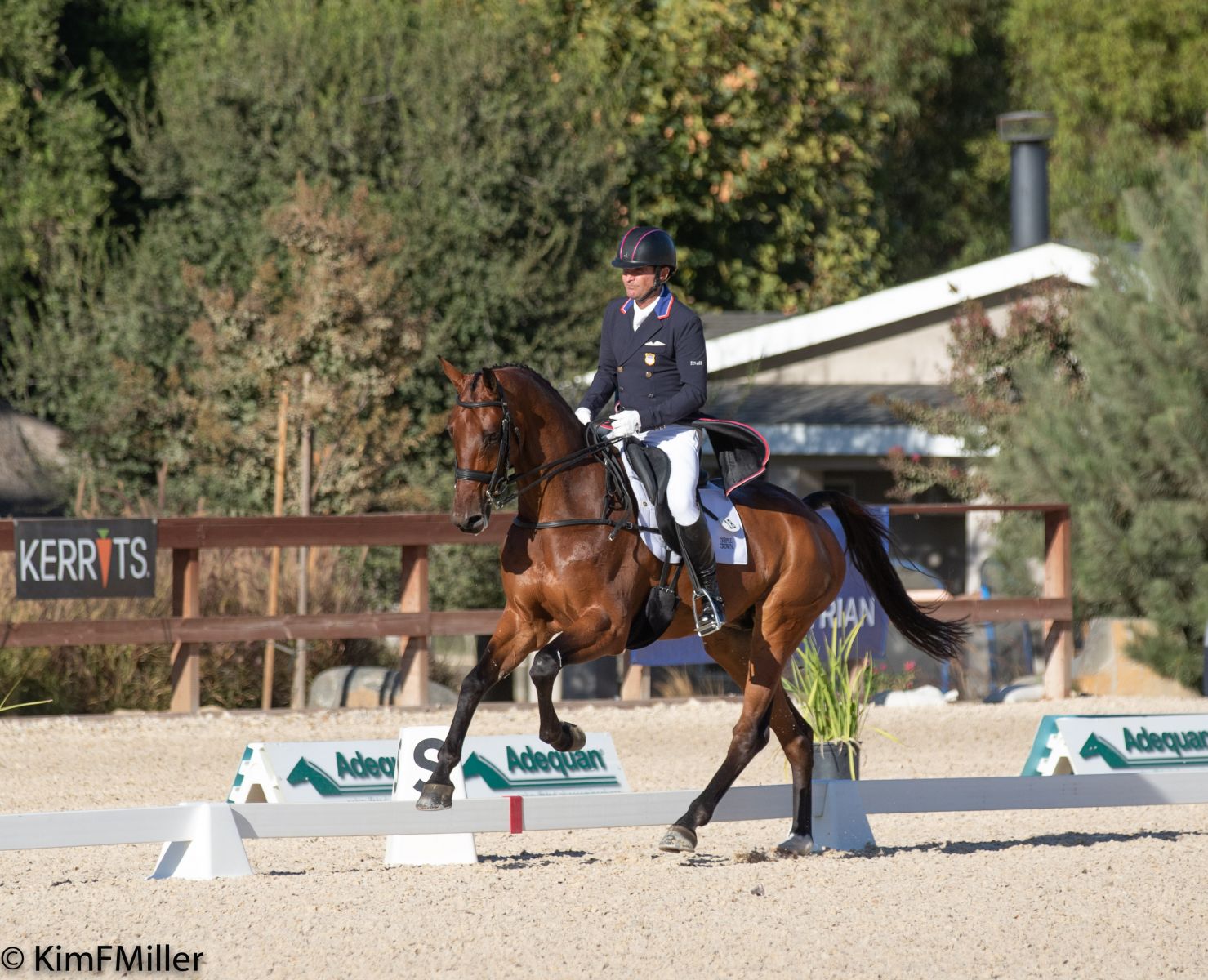 One such pair was Phillip Dutton and Fernhill Singapore, who also came from the East, and are second on 31.30. 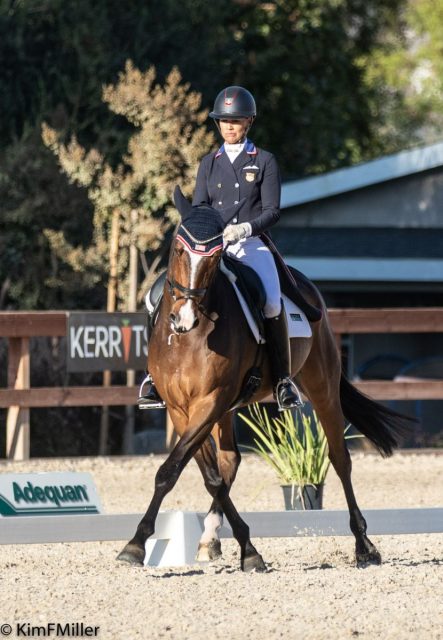 With East Coast heavy hitters in the ring, California-based Tamie Smith may have the weight of West Coast hopes on her shoulders. But that wasn’t evident in her cool horsemanship on five horses in the FEI divisions.

She is third in the 4* on her daughter Kaylawna Smith-Cook’s German Sport Horse, Passepartout, continuing his rocket ride begun with Kaylawna and carried on with Tamie during Kaylawna’s pregnancy. “I am so proud of him. He was uphill and pushing out to the contact,” said Smith. 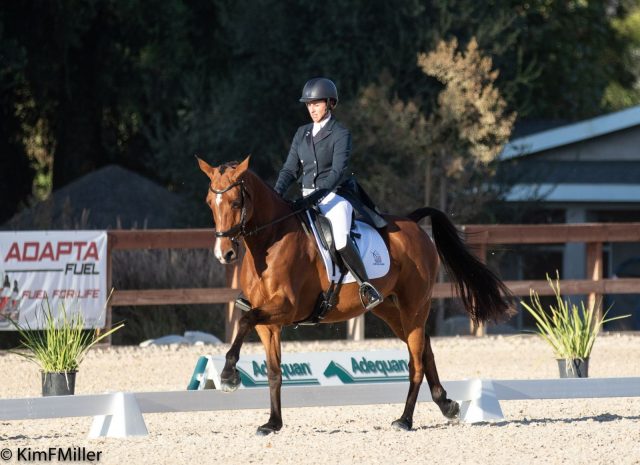 This pair is followed by Texas-based Rebecca Brown and Dassett Choice. Brown has been travelling extensively from her Texas base and made a positive showing here with this horse and her second 4* entry, Fernhill Fortitude. 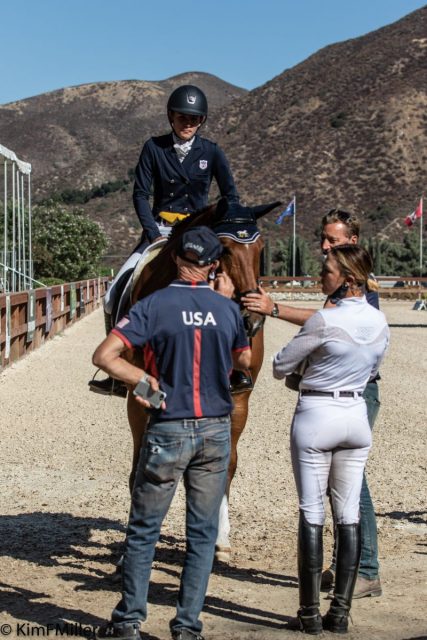 Even behind his mask, the big smile those third and fourth standings put on USEF Emerging & Developing Rider Coach Leslie Law’s face was unmissable. He’s coaching the Adequan® USEF Futures Team Challenge captained by Smith and including Brown and young rider Charlotte Babbitt. Charlotte and 2 A.M.‘s 4th standing in the CCI3*-L after dressage puts Law’s team in the pole position over the squad led by Erik Duvander, USEF High Performance Eventing Director. Team Erik is captained by Elisabeth Halliday-Sharp, riding Cooley Quicksilver, and fellow 4* pair Emilee Libby and Jakobi. Halliday-Sharp and the gorgeous gray sit fifth, and Libby and Jakobi are 10th. 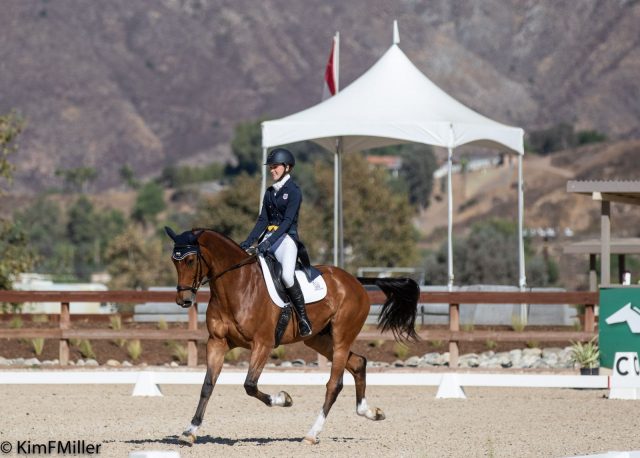 Charlotte Babbitt and 2 AM. Photo by Kim Miller.

Contesting her second CCI3*-L, Babbitt said she benefited from the Futures Team experience even before competition began during jump and flat schools with Law and team meetings. Tangible tips? “I learned to go to a team member if I need help, but to remember that you’re the one who got yourself on the team,” the Northern California-based rider explained. “We talked about learning to lean on your teammates when you need to, but not shifting your perspective or approach unnecessarily.” 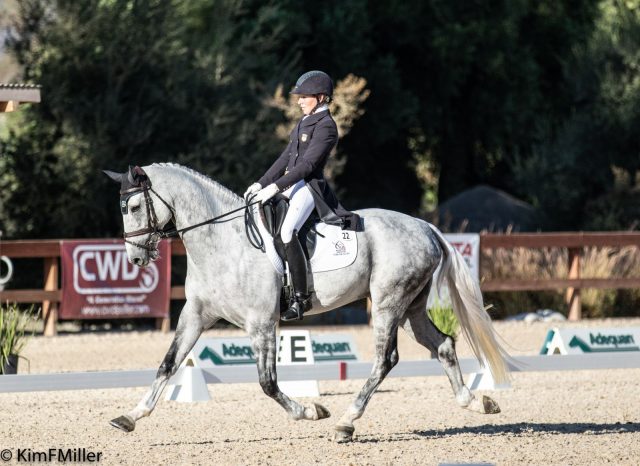 It was a special treat to see Tamie Smith’s Pan Am Games team gold medal partner Mai Baum and his owner Alex Ahearn do the test ride before the CCI4* dressage. Mai Baum has already earned his qualifying scores for Tokyo Olympics consideration. 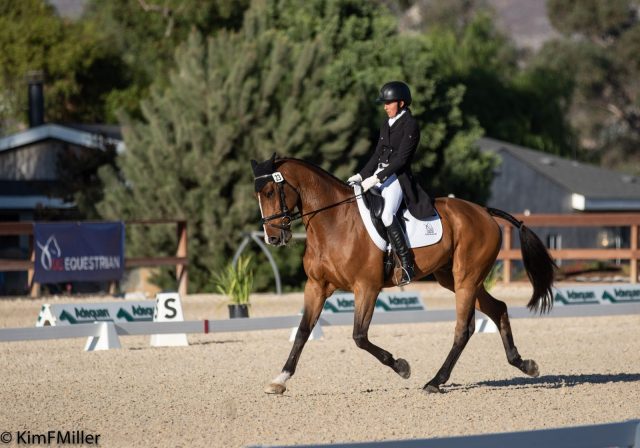 “Twisty and turny between long gallop stretches” were the characteristics mentioned by several 4* contenders in anticipation of Friday’s excursion over the Galway Downs’ 242 acres. In several cases, major challenges arise on relatively short notice, putting a premium on boldness and confident communication. Having most of the track roped off is new this year, eliminating opportunities to cut corners that existed in the past and intensifying the pressure on pace over track. The field is full of well-known riders, but the collective experience of the horses they’re on runs the gamut. Everyone agreed it will be an interesting phase. 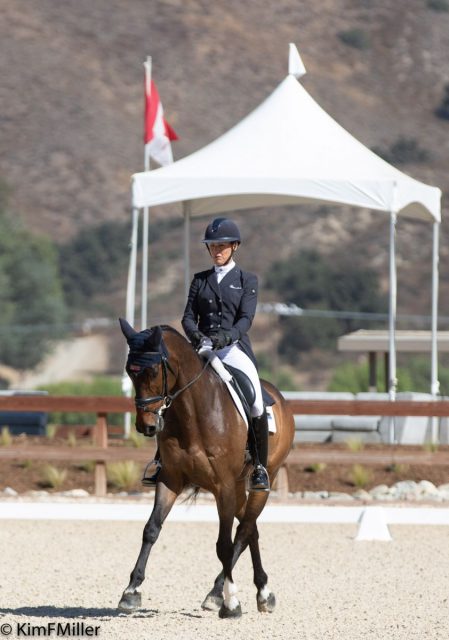 Tamie Smith leads the pack with Elliot-V on a score of 29.80 from judges Sandy Phillips and Robyn Fisher. That’s even after forgetting the “stretchy circle” and a brief hitch in a canter-depart, reflecting the horse’s quality even when things don’t all go perfect. “He is a super horse that is really great in all three phases,” Smith reports. The Dutch Warmblood is owned by Louisa Southworth, one of Smith’s off-to-college students. “Louisa was watching it on the livestream and she texted me saying, ‘That was pretty magnificent,'” Smith shares. The Southworth family is looking to syndicate Elliot-V for Smith to keep campaigning “and I am super excited about him.” 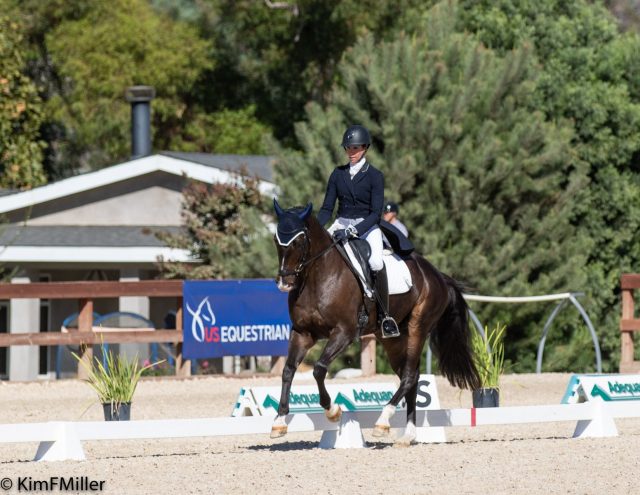 Very close behind Smith is amateur rider and USEA Area VI chair Asia Vedder and Isi on a 29.90, then professional Auburn Brady-Excell on BSP Tuxedo with a 34.20. 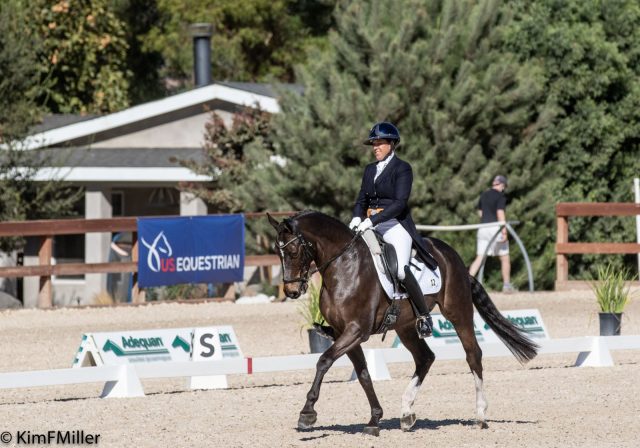 All three are among the nine of 12 division contenders eligible for the CCI3*-L USEF National Championships, hosted for the first time on the West Coast. At stake is the USEF National Combined Training Trophy for the highest placed U.S. rider over the age of 16. 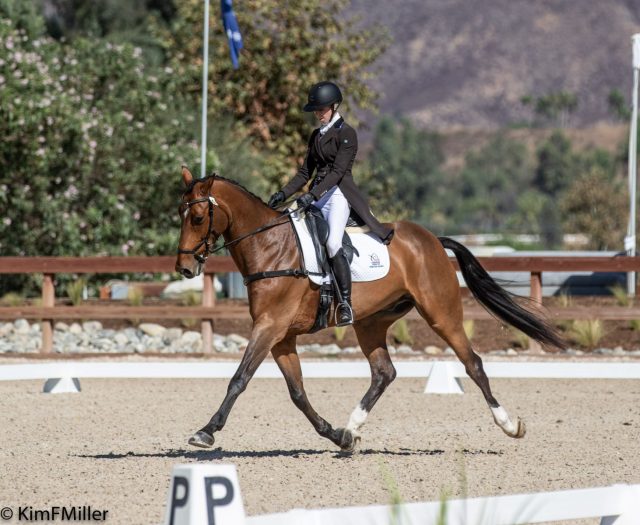 Concurrently, the CCI3*-L includes the National Young Riders Championship for the John H. Fritz Trophy. U.S. riders aged 16-21 are eligible, putting Charlotte Babbitt and Sophie Click in the hunt for this prestigious award. 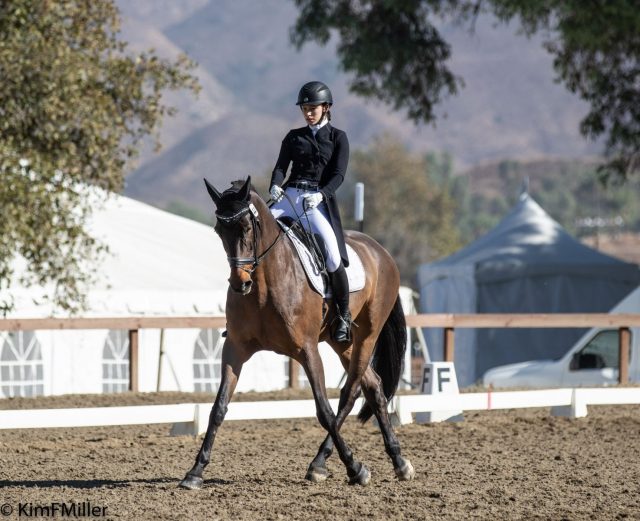 There were an Olympians and a Pan Am Games gold medalist in the 34-horse CCI2*-L contest, but it is three amateurs who lead after dressage. India McEvoy and Redbull are on top with a 26.50. But not by much: Junior Haley Turner and Shadow Inspector follow up a CCI2*-S win just a month ago at Twin Rivers to sit second on a 26.60.  Lauren Burnell and Freedom Hill earned a 27.20 for the third rank in front of judges Wayne Quarles and Valerie Vizcarando-Pride.

“He was very green last year and we haven’t done much this year,” says McEvoy, a small animal veterinarian from Northern California. “He is a very obedient, relaxed horse who is nice to ride in the dressage ring. He’s had some pretty good scores, but I’d say this is one of his best.”

The COVID caused downtime allowed for extra focus on self-carriage in the canter for Redbull. McEvoy rides mostly on her own, as she lives two hours from her coaches James Alliston and Helen Bouscaren. “Dressage and cross-country are his stronger phases,” McEvoy said of the Hanoverian/Thoroughbred. “He’s a big horse (17hh) and getting him to fit himself into the dressage ring has been a challenge. He has gotten stronger in his movements and has built himself up over the break.” He’ll have a different use for that tomorrow. “The course looks great and challenging,” McEvoy said.

Preliminary divisions also did dressage Thursday. Friday opens the lower divisions, including the “Challenge” format at the Modified-Training, Training-Novice; and Novice-Beginner Novice levels.

The three-day format begins with dressage in Galway Downs’ Grand Prix arena on Friday. On Halloween Saturday, it’s out on cross-country at max distance and effort for all levels and over all new routes. The winners are determined Sunday during stadium jumping, with riders going in reverse order their standings in the Grand Prix arena. The CCI-L competition concludes on Saturday, so Sunday is all about Challengers.