I am pleased and relieved to report that the Area V pros at the Pro Pony Challenge can all ride a little bit, bareback on spirited ponies, while wearing silly hats (attached to their helmets).  Yes, the picture above is of approximately 21 Area V pro riders who good-naturedly participated in this fundraiser for the Area V Championships in the fall. The fundraiser was held in the indoor arena at Texas Rose Horse Park on Friday evening, along with hors d’oeuvres, beverages and an exuberant, noisy crowd, to kick off the horse trials this weekend.  If you know any of these people, save that photo in the “ok that explains a lot” file.

First was the Easter bonnet parade and contest, and then the Pony Challenge.  Most of the pros relentlessly insisted that they had nothing whatsoever to do with assembling their Easter hat (and accessories in some cases,) it was all their students and well-wishers –and from their expressions, that was probably true.   So, for the record, Mike Huber did not think up the pigtails attached to his bonnet himself, and Stuart Black had nothing to do with the feathers and eggs that festooned his helmet and … backside.  And so on, through the sparkles, bangles, flowers, trills and widgets sprouting from the helmets and various body parts of the pros.  Heather Morris won the Easter bonnet contest, taking home a prize basket filled with goodies, including pez and marshmallow bunnies.

Before the Pony Challenge started there was a brief pause for a surprise announcement – the 2014 USEA annual convention will be held in Fort Worth, Texas.  It’s an exciting opportunity to highlight Area V, eat great barbeque, and perhaps even allow eventers from all over the country to find a great new pair of Western boots and go country dancing at Billy Bob’s.  I do recommend leaving the bull riders where you find them at Billy Bob’s when you go home, no matter how ruggedly handsome they are.  If you think eventing is a hazardous sport filled with insanity, you should try bull riding.  But anyway, y’all come!

Angela Grzywinski was presented with a bottle of champagne in recognition of the honor of being the first out of the start box onto the Advanced course on Sunday, a request she made.  “I have been eventing in Area V for about 20 years, and definitely want to be that trailblazer around this historical first,” Angela says.

Next, Kim Brunson and the Brunson Equestrian Center provided genuine ponies (14.2h and under) for the Challenge.  Buckets were fastened along the long sides of the arena, each containing Easter eggs, each egg bearing the number of one of the entries.  Starting from one end of the arena, the pros had to ride bareback to each bucket and take the egg with their number from each one – while mounted –then ride back to the start area and put the eggs in a basket.  The first to fill their basket with all their eggs won.  The pros were divided into three heats so that not more than 8 at a time rode, with the winner of each heat moving on to a final heat.

Yes, of course, the ponies who looked so adorable standing quietly with their young rider handlers turned feisty and fussy the instant a pro through a leg over.  Some were fresh, some bucked, many wanted nothing to do with the buckets, making for a true test of skill and horsemanship.  Some pros seemed to think that a short flat school while waiting for their heat to begin would win their pony over with some leg yields, figure eights and flying changes.  However, there appeared to be little noticeable effect on the ponies’ willingness to help search for plastic Easter eggs in buckets tied to the fence.

The betting public likes assurance that all the jockeys are trying their best to win.  However, while some riders were out to win at all costs, others were rather casual, or perhaps mounted on slow or uninterested ponies.  Mike Huber did not appear to be pushing his ambling steed at all.  Danny Warrington, on the other hand, made it clear before his heat started that he was going for gold, vigorously warning a crowd that was as unruly as the ponies to keep his path clear, even mildly trampling a few people with his pony as an early preview if they did not watch where they were during the heat.  But it was Kadi Eykamp, on an enthusiastic light buckskin, who actually ran down the Easter Bunny during her final sprint to win the second heat – accidentally, of course.   It must be said that the Easter Bunny, perhaps lacking full visibility over puffy cheeks the size of snow drifts, was crossing the sprint path to the finish at an easy walk just as the herd was thundering down.

Ellen Doughty, Kadi Eykamp and Julie Wolfert won their heats and advanced to the final.  Julie seized the overall win when she found her egg almost right away. Julie is going Intermediate on Buenos Aries and Preliminary on Buenos Dias here at the Texas Rose Horse Trials.

We want to thank the Brunsons, especially Kim, for initiating this fundraiser and making it possible here at Texas Rose.  Hats off to the pros who were such good sports to participate and make it fun for all.  And most especially we’d like to thank the ponies, who may have been thinking that it was past their bedtime, but who didn’t kill anyone and provided a lot of great entertainment.

Stay tuned to Eventing Nation for updates and photos this weekend!  Saturday is dressage for all levels, show jumping for the upper levels and training, and cross-country for Novice and BN.  On Sunday the Advanced division will make the first run on an Advanced course in Area V in over 20 years, and the first run over the newly-constructed course at Texas Rose, starting just after 11:15 am. 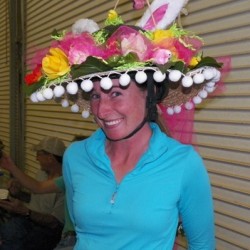 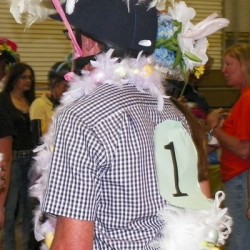 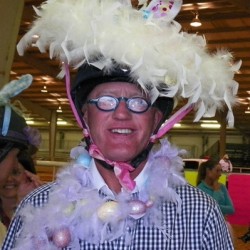 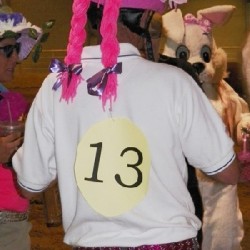 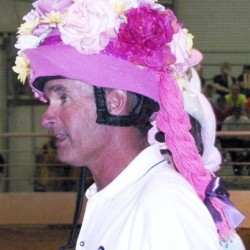 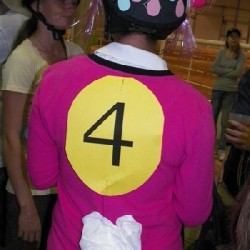 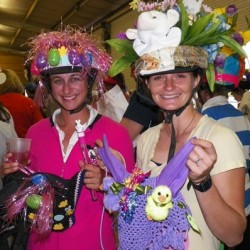 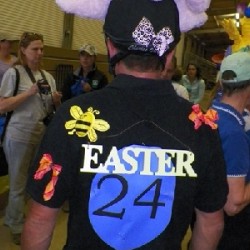 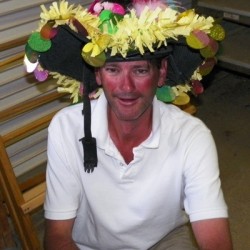 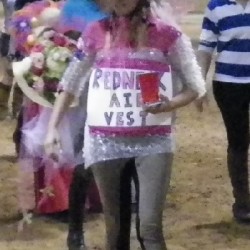 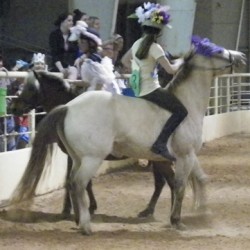 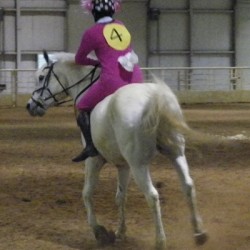 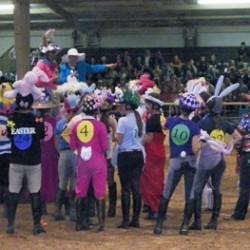 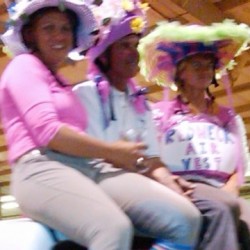 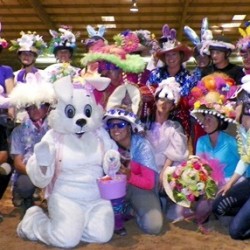