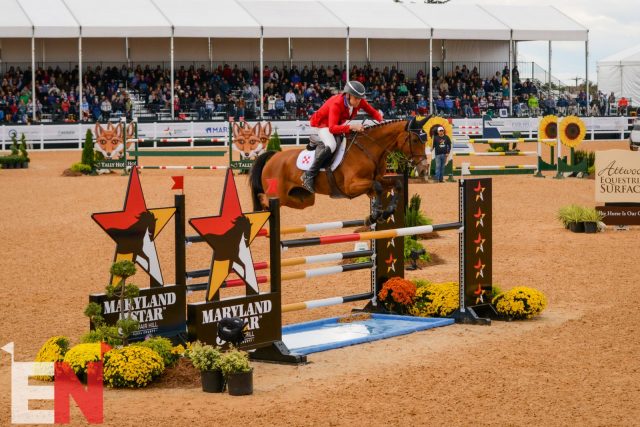 Boyd Martin and On Cue. Photo by Abby Powell.

The Maryland 5 Star at Fair Hill is excited to welcome back MARS EQUESTRIAN™ and Brown Advisory and in new positions as the event’s Title and Presenting Sponsors! The event will now be promoted as the “MARS Maryland 5 Star at Fair Hill presented by Brown Advisory.” The much anticipated second edition of Maryland’s elite equestrian competition is set to return to the Fair Hill Special Event Zone in Cecil County, MD, October 13-16.

The MARS Maryland 5 Star at Fair Hill presented by Brown Advisory is one of only two 5 Star level equestrian events of its kind in the United States and just the seventh worldwide. The event made a spectacular debut last year, welcoming a total of 20,886 spectators and 184 competitors that featured four of the top eight eventers in the world.

“We are thrilled and honored that MARS EQUESTRIAN and Brown Advisory, two global brands with unwavering support of the horse industry, have chosen to increase their involvement with our event,” said Jeff Newman, President & CEO of the Maryland 5 Star Event Committee. “It’s truly a validation of our efforts to showcase world-class eventing, the Maryland Horse Industry, Cecil County, and the state of Maryland to the world on an annual basis!”

The new Title Sponsor of the Maryland 5 Star at Fair Hill, MARS EQUESTRIAN is one of the biggest and most significant sponsors in equestrian sport. The sponsorship will continue to showcase Mars, Incorporated’s leading brands in horse care, pet care, veterinary services, and confectionery across the grounds at many events. For generations, Mars has celebrated a rich equestrian heritage, and through purposeful partnerships, MARS EQUESTRIAN is committed to the sport and building an enduring legacy. From world-class competitions across all equestrian disciplines to stewarding the power of horses on society and sustainability, MARS EQUESTRIAN is dedicated to improving the lives of horses, pets, and the people who love them.

“MARS EQUESTRIAN has been a supporter of equestrian sports for many years and is proud to become the title sponsor with the Maryland 5 Star at Fair Hill,” said Geoff Galant, Vice President of MARS EQUESTRIAN. “Sponsoring this event at the highest level exemplifies that we understand horses have a remarkable effect on people, and we want to spread that joy through direct interactions with fans, consumers, and competitors. The Maryland 5 Star at Fair Hill provides us a unique opportunity to become a partner with them in the effort to continue to grow this event into a world-class competition.”

As the event’s new Presenting Sponsor, Brown Advisory has also strengthened its partnership with the event and its ties to the Maryland community. Brown Advisory is an independent investment management and strategic advisory firm committed to delivering a combination of first-class performance, strategic advice and the highest level of client service. The firm’s institutional and private clients are based in 50 states and more than 44 countries and territories and are served by over 800 colleagues worldwide, all of whom are equity owners of the firm. They are dedicated to raising the future for and with their clients, colleagues and communities at large.

Mike Hankin, President and CEO of Brown Advisory, said, “Our firm, which was founded in Maryland, has a history of supporting equestrian sport and events that have a positive impact on the community and local businesses. We believe the Maryland 5 Star at Fair Hill does just that and so we’re pleased to step-up our commitment as the presenting sponsor.”

“Cecil County is proud to serve as the host location of the Maryland 5 Star at Fair Hill,” said Danielle Hornberger, County Executive. “The event celebrates our equestrian heritage while bringing people to visit our great county and therefore, we thank MARS EQUESTRIAN and Brown Advisory for increasing their support of the event to ensure its success.”

Tickets for the MARS Maryland 5 Star at Fair Hill Presented by Brown Advisory – including reserved tailgate spots – are on sale now at Maryland5Star.us/tickets. A variety of single and multi-day ticket packages along with exclusive Club and VIP Hospitality packages, General Admission tickets starting at just $15 and much more are available.

Fans are encouraged to follow the event on social media @maryland5star and sign up to receive the event e-newsletter for all the latest news and information at maryland5star.us/newsletter-sign-up/, including details on this year’s new additions.