This article is brought to you by Athletux Equine. For more Athletux articles, please click here. 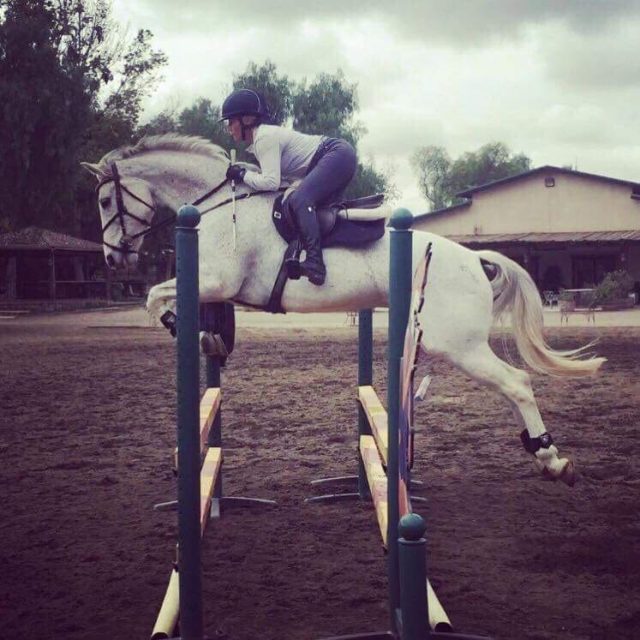 Layla’s “Sasha Fierce” side comes out to play in a jump school with Hawley Bennett. Photo by Danielle Surret.

Powerhouse to the jumps but sweet as can be in her stall, Sasha Fierce truly embodies the alter-ego persona Queen Bey had in mind when she released the album the little gray mare is named for.

“She is such a sweet mare on the ground, we wanted to give her a really sweet barn name,” owner Kathie Hackler says of “Layla.” “But when she gets to work she’s completely different. She’s so focused on the job and well, fierce. So when it was time to give her a show name I turned to David and said ‘There’s no choice, she’s got to be Sasha Fierce.’”

David being David Acord of New Heights Training Stables in Pleasanton, California, who helped Kathie find and purchase Layla as an upper level prospect in 2011: “We were looking for something that could go to Kentucky one day, and Layla absolutely fit the bill. She’s such a great horse.”

David had the ride on Layla until this fall, making the sacrifice to send Layla to Hawley Bennett-Awad in order to focus on his young family and burgeoning coaching business.

“It was a tough decision to send her to Hawley, but it was the right thing to do,” he explains. “She’s such an incredible horse that she really needs someone with more time and the ability to instill confidence in her through building a really strong relationship. I know Hawley always liked her, and when we realized it would be best for Layla to go somewhere else to reach her full potential, Hawley was the obvious choice.” 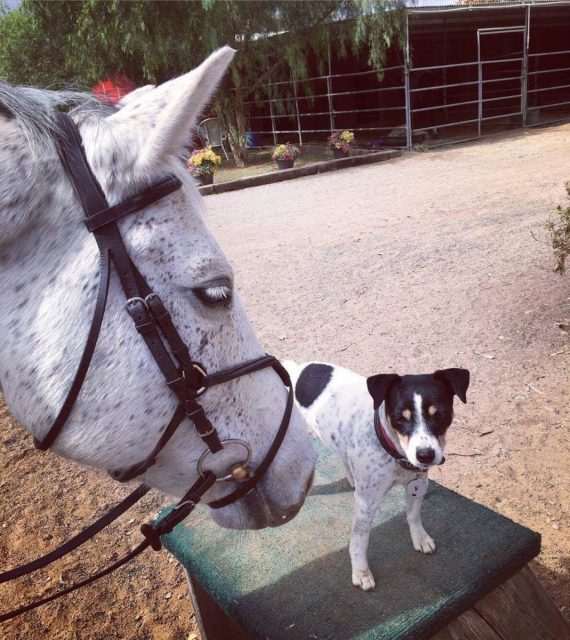 Layla’s “not so fierce” side, with Hawley’s dog Bento. Photo courtesy of Hawley Bennett-Awad.

Kathie agrees. “It was hard sending her away, like sending a child off to college, but I did a lot of research and the fact that Hawley is such a capable rider and is located at Copper Meadows made the decision even easier.”

Layla had a strong career with David, reaching the two-star level this year at Fresno County Horse Park in February. David says, “We had a couple really nice starts, but the last couple outings weren’t as great. For as bold as she is she just lost some confidence she needs to gain back. Hawley’s access to amazing cross country facilities will really help Layla be the best horse she can be.”

He adds, “She can be feisty in dressage, and needs a rider that knows how to ride that type of horse. Hawley gets along with her beautifully and I can’t wait to see what they do together.”

“I love riding her — she really ticks every box for what I like in a horse,” says Hawley of her newest mount.

Everyone has a type, and for Hawley, Layla is a great embodiment of what an upper level horse should be. “She’s got this wonderful attitude in the barn, she’s so quiet in her stall and so easy to be around. But then you take her out cross country and you see a completely different side to her. She knows her job and wants to do it. I love that in a horse.”

And at 12 years old she has plenty of time to go the distance with Hawley in the irons. “She’s young still, and was started a bit late so there’s even less mileage there,” Hawley says. “I can absolutely see her being a team horse, going to the Pan Ams or even the Olympics in a few years. She’s definitely the type of horse you want to build a relationship with, so we’ll take our time and get to know each other for a bit. I’m just super excited about her and so grateful to David and Kathie for choosing me to take her on.” 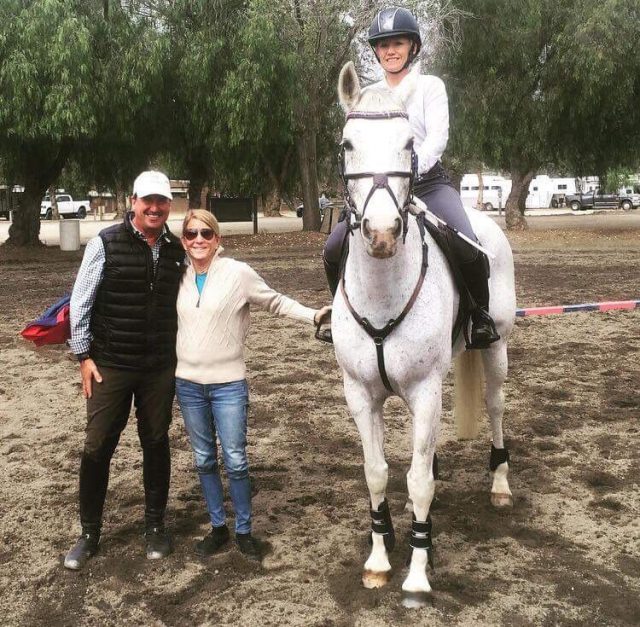 Hawley and Layla with David O’Connor and Susie Hutchinson during a training session last week. Photo by Danielle Surret.

Kathie and David are just as excited to watch the pair grow. “Hawley’s someone I’ve admired for a long time. She’s obviously an incredibly talented rider but she has so much integrity and is also a wonderful person,” David says. “I knew Layla would respond well to how she rides, and I really think they’re going to be a pair to watch.

Kathie concurs, “I really think Layla wants it, she wants to be a top horse, and Hawley wants that for her as well. I can’t wait to watch them, it’s going to be so great.”

“To have an opportunity like this, on such a great horse, is something pretty rare,” Hawley says of the partnership. “When David called me I actually asked him if he was sure, it’s just not something that happens. It takes so many people to develop these horses to this level, and Layla would not be the horse she is today were it not for the great job David did with her, and the amazing support system Layla has with Kathie as an owner.

“It’s amazing the dedication they both have to the horse and I just feel incredibly lucky to be a part of the team. These friendships and partnerships we make are just so incredibly important and it’s critical to keep all the doors open. David was vital to developing Layla, and vital to sending her to me. If she makes it to Kentucky, he’ll be in the owner’s box.”

Whether she’s snoozing in her comfy stall in the Southern California sunshine, or cruising around the cross country course at Copper Meadows, Sasha Fierce has quite the fan club. And with a name inspired by the likes of Beyoncé, there’s no telling what she’s capable of.