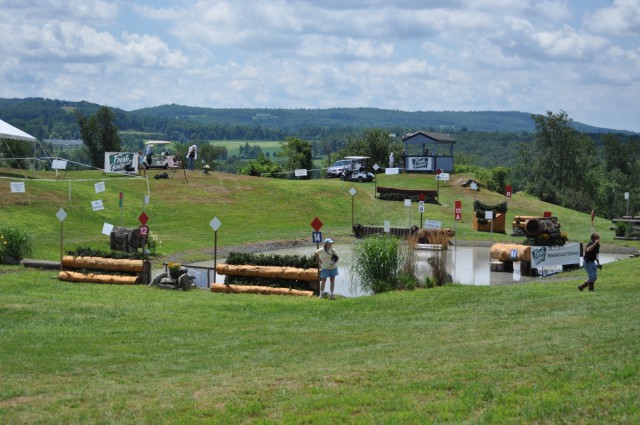 The 14th annual Millbrook Horse Trials kick off this Thursday in New York, and nearly 500 horses and riders are entered to contest Tremaine Cooper’s cross-country course, which features new fences on the area’s famous rolling hills. What makes Millbrook such a highlight of the season for so many eventers? Steve Blauner, who sits on the organizing committee, said there’s more than just one answer.

“Partly, it’s the scarcity factor, as Millbrook is the last event of the season in Area I that still runs Advanced and Intermediate divisions,” Steve said. “Secondly, we really try to make it a first-class experience for the horses and riders; as we say, it’s all about the riding.”

Fellow organizing committee member Louise Meryman focuses on making sure the facilities are top notch for horses and riders alike, Steve said. And Millbrook has a beautiful backdrop to create those top-notch facilities for competitors, as the countryside truly makes this event one of the most picturesque in Area I.

“It’s just beautiful country with the rolling hills, which a lot of riders find refreshing, particularly if they’re based outside Area I,” Steve said. “This event gives an opportunity to run your horse over something other than totally flat ground.”

Course designer Tremaine Cooper introduces new elements to the course each year, from the Beginner Novice level all the way up through Advanced, which this year boasts 48 entries. “We’re one of the few events in the country that runs Beginner Novice to Advanced, and the course is meant to be friendly and welcoming to the riders at all levels,” Steve said.

The terrain makes Millbrook an ideal venue for watching cross country too, as spectators can see large sections of the course while perched on one of the hills. The WaterView Tent is also a favorite spot for spectators to watch the action, Steve said.

“You can buy a ticket to have breakfast and lunch in the WaterView Tent and sit right by the water jump to hear expert commentary from professional riders, who will take the mic all day long while the horses are going through the water,” Steve said.

And while cross-country day is sure to thrill both riders and spectators alike, one of the true highlights of the weekend will come on Sunday during the annual Benefit Luncheon, which this year will feature the inaugural presentation of the Charles Owen Equestrian Role Model Award to Courtney King-Dye.

“This is the first year that we’re fully operational as a 501(c)3,” Steve said. “In the past, our lunch was run by, staged by and put on by the Duchess Land Conservancy, which conserves the land over which we run the event. This year, we were on our own to organize the lunch.

“The board was looking to do something significant and different. One of our board members, Bridget Colman, came up with the idea of giving an award to a horse person who has made a significant, positive impact on all equestrian sports.”

Though none of the board members had ever met Courtney, they unanimously agreed that she has made an incredible impact on the lives of riders in all equestrian sports through her advocacy work to raise helmet awareness since she suffered a traumatic brain injury in a fall in March 2010.

“For me personally, the hat never went on until I started to jump and sat perched on a post on my outdoor ring,” Steve said. “That’s really changed since Courtney’s accident and her outreach through Riders4Helmets. She was a natural person to receive this award.”

The board decided in February to give the award to Courtney, which proved to be serendipitous timing, as Silva Martin’s fall that left her with bleeding and swelling on her brain occurred one month later.

“Boyd said that Silva really owed her life to Courtney because she started wearing a helmet after Courtney’s fall, and had Silva not been wearing her helmet on March 5, the diagnosis would have been a very different and much more dire one,” Steve said.

It’s sure to be an emotional occasion on Sunday, as Silva will present the Charles Owen Equestrian Role Model Award to Courtney, the person who arguably saved her life.

“Nobody would ever accuse me of being a very emotional sort of person, but I just couldn’t be prouder about the award and how it’s come together,” Steve said. “It’s so unusual when one person can make such a positive contribution to so many people. Teachers and great artists and great people like Courtney can honestly say, ‘I’ve made an impact on literally tens of thousands of people and probably saved a few lives.’”

The award gives $5,000 to the winner to be donated to the charity of choice, and Courtney will be donating the prize money to Riders4Helmets, which recently celebrated the 5th annual Riders4Helmets International Helmet Awareness Day on July 12.

Tickets are still available for the Benefit Luncheon and can be purchased on Millbrook’s website. A ticket to the lunch also includes a prime seat for the PRO Four Bar Competition, in which two PRO riders and two local amateur riders will compete against each other for $1,000 in prize money.

Between the huge Advanced division, presentation of the Charles Owen Equestrian Role Model Award at the Benefit Luncheon and PRO Four Bar Competition, it’s going to be an action-packed weekend at Millbrook. Visit www.millbrookhorsetrials.com to purchase tickets for the Benefit Lunch and WaterView Tent.