The model/celebutante has revealed her pursuit for a spot on the 2016 US Olympic team. Heavy reported, “Hadid started her equestrian career at age 3 and has won many awards for riding in her nearly 15 year career, according to Yolanda Foster’s website.”

The Real Housewives of Beverly Hills star and Bella’s mom has since taken down the website, though she did recently post this photo of Bella and a horse.

Bella competed successfully throughout 2013 in Equitation Over Fences classes. Her last three competitions on record with the USHJA were the Showpark Summer Classic, Gold Coast Series and the Los Angeles International Jumping Festival aboard “Night Cap.” 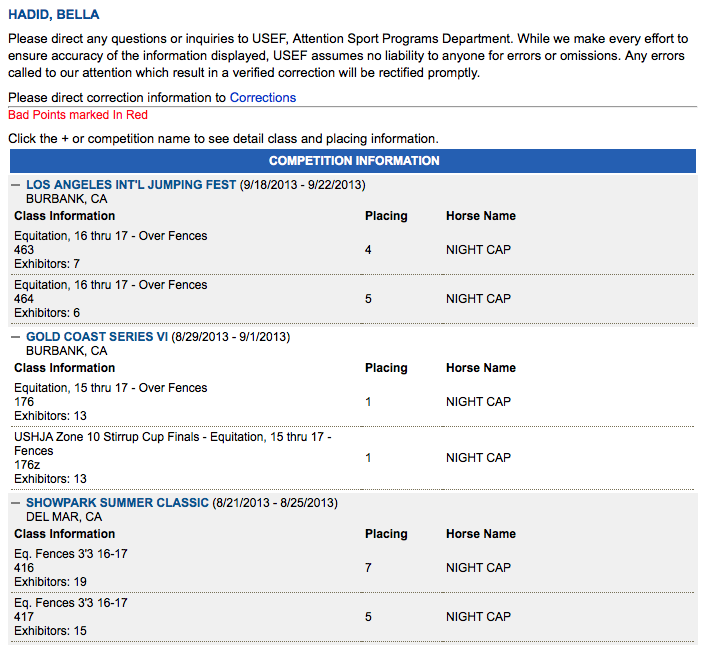 You can watch Bella and Night Cap at an unnamed event in this video from 2012.

“My devotion stemmed from my mom’s love of horses. I have been riding since I could walk and the fact that my mom knew everything about horses really helped my passion grow,” Bella told Porter Magazine. The model likened horse riding to yoga and claimed it helped her “maintain balance” amidst her globe trotting lifestyle.

But if you’re looking for the next beloved equestrian celebrity, i.e. Kaley Cuoco, you might want to look away now, because I’m calling shenanigans. While Bella has the very occasional horsey post, like this one from 13 months ago…

… or this one which included her horse “Lego,” presumably Night Cap, from 16 months past…

I mean, you can’t just decide to be an Olympian overnight, especially not in eventing … the model’s chosen discipline according to Fashion Times. A quick search in the USEA Rider Records proved Bella Hadid is not currently in the system.

Whether she was simply toying with the media — a valid theory considering her #squad — or really is making an attempt at Rio for 2016, Horse Nation wishes you all the best, Bella!