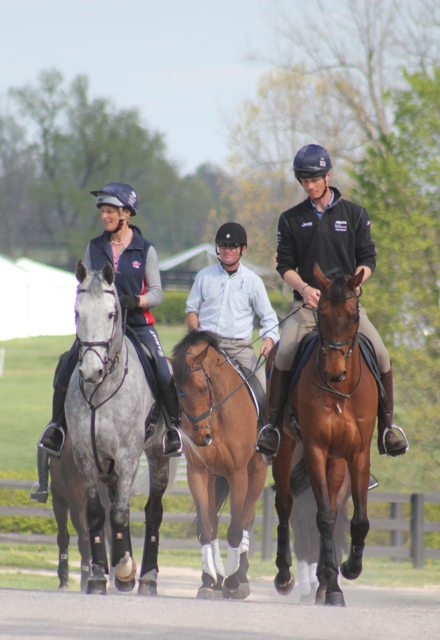 Three past winners of the Rolex Kentucky CCI****  – Mary King (on Fernhill Urco) Phillip Dutton (on Fernhill Eagle) and William Fox-Pitt on Seacookie.

There was a sea change at the Kentucky Horse Park today as a large chunk of the CCI**** competitors arrived; as James Alliston and his brother Mike remarked, it went from being quiet and serene in the morning to a bustling hive of activity by late afternoon.

William Fox-Pitt (above on Chilli Morning) and Mary King got to the Horse Park at about 4pm, and were loving the weather – sunny and warm, I think I may even have heard Mary mentioning shorts! 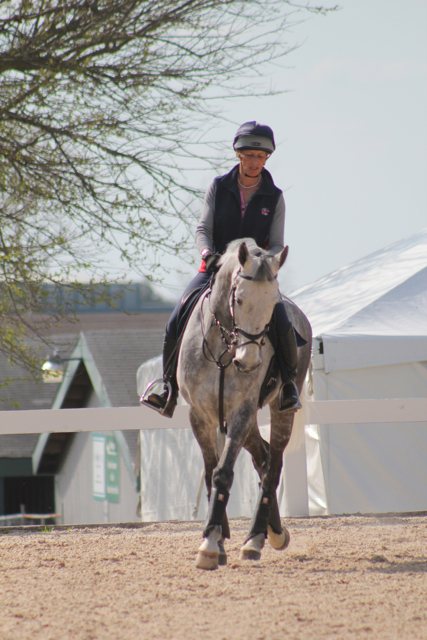 Mary told me Fernhill Urco is feeling very fresh, and she definitely thinks he remembers the Horse Park from his second place finish here two years ago, “He’s thinking about the cross country!” 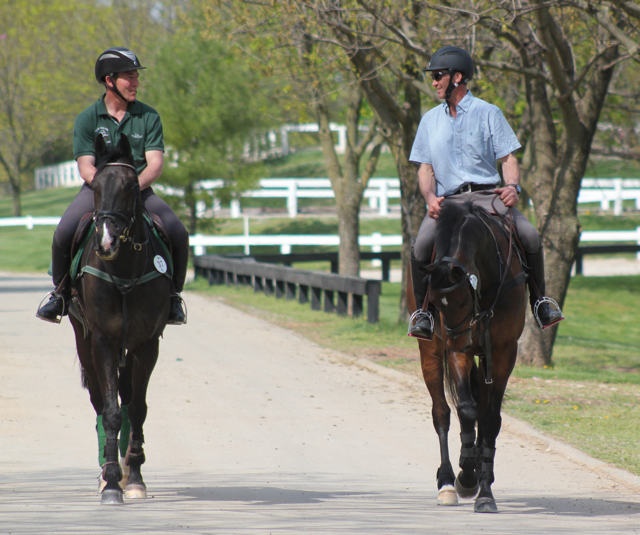 Austin O’Connor (on Ringwood Mississipi) and Andrew Nicholson (on Calico Joe). Most riders who arrived today took their horses for hacks around the park, and hand grazed them but Andrew took Quimbo out for some canter work. 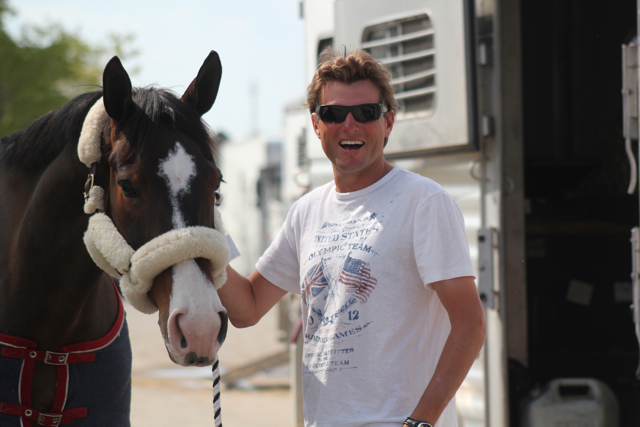 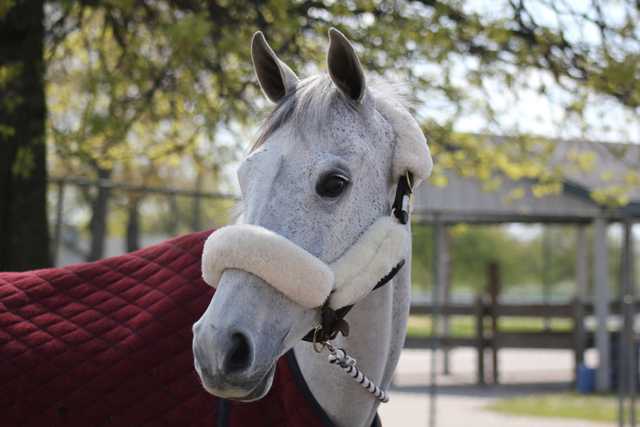 Likewise Caitlin Silliman’s Catch A Star (Hoku). Lindsey and Caitlin were looking a bit tired by 6pm this evening as they’d originally set off from home at 4am, only to have the truck break down ten minutes down the road. Luckily they managed to swap it out without too much hassle, and as they said, if you’re going to break down at all, that would be the way to have it happen! 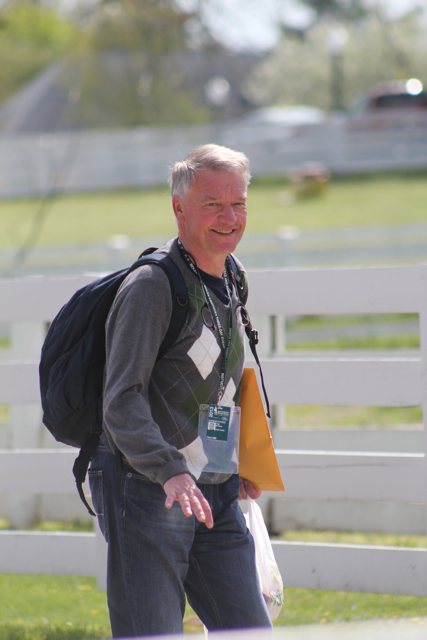 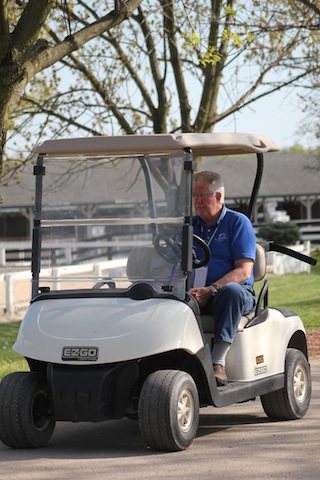 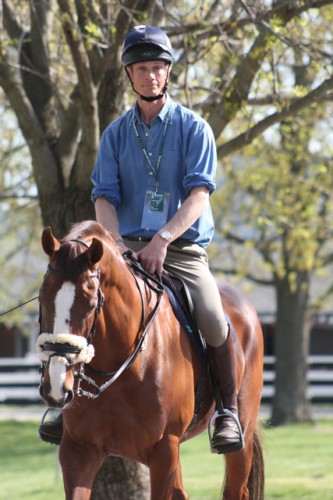 Chilli Morning being followed by his “companion!” 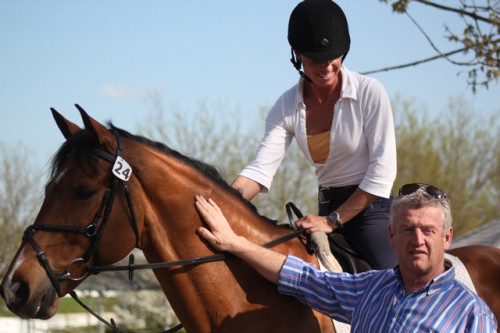 I was very lucky to bump into Tom and Magette Meagher who stand the world’s most succesful living Three-Day Event Sire Ricardo Z at their Kedrah House Stud in Ireland.  This weekend their loyalties will be torn between supporting fellow countryman Austin O’Connor, and Kristin Schmolze who rides a son of their stallion in Ballylaffin Bracken.

Many thanks to Tom and Magette for chatting, and looking forward to watching both Kristin and Austin go this weekend. 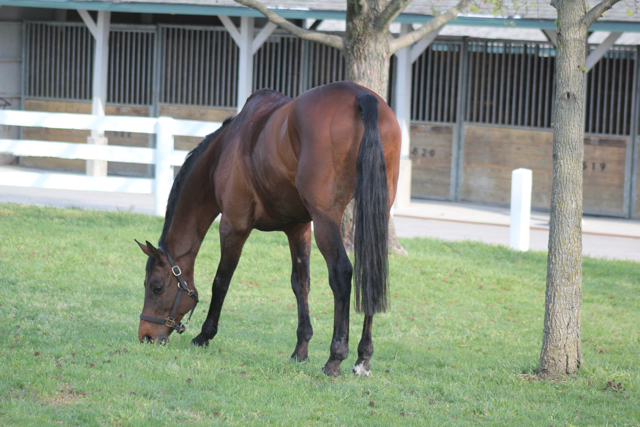 Seacookie loose grazing – the horses in the isolation barn take it turns to loose graze during the day. Alex also said they seem more relaxed down  in the stable yard than up in the round pens, plus it enables the grooms to get on with other jobs while they can keep on eye on them simultaneously.

Tomorrow will be another busy day at the Horse Park and I imagine we’ll have a full house by the end of the day. . Thanks for visiting Eventing Nation, and looking forward to a busy week – Go Rolex Kentucky Three Day Eventing!

Update: We have heard from Karen and Marilyn that Demeter is still entered (she is also on the ride time sheet) and plans to trot up tomorrow.  A press release is being sent out shortly, but Karen explained that a young horse Marilyn was jumping hit a jump and fell, catching Marilyn’s shoulder and apparently separating it as the horse got up.  The hope is that Marilyn will be feeling good enough to ride on Friday and we hope that we’ll have a chance to cheer her on this weekend.