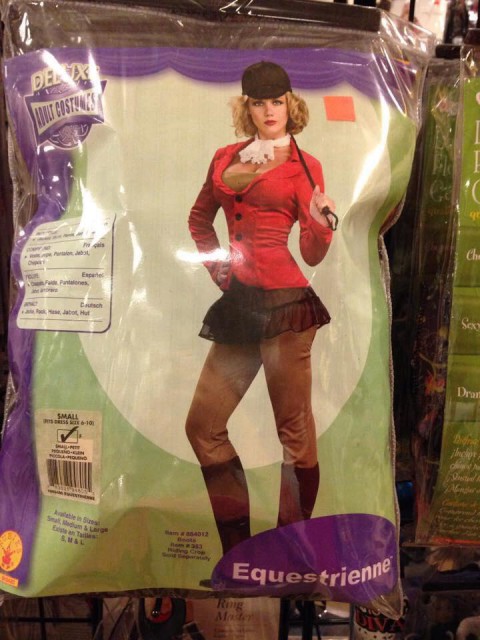 Tally Ho! You can be a sexy anything for Halloween!

Have I mentioned that I love Halloween? There’s nothing more amusing to me than an excuse to dress up and eat a bunch of candy. One year, I ended up going out in my show-clothes. We lived in a somewhat horsey-area, so many people knew what my “costume” was. However, there was one elderly man thought I was a lawyer. He told me it was the scariest costume he saw all night. Somehow, I don’t think he’d confuse the above ‘Equestrienne’ costume for a lawyer. Tally Ho indeed.

Nelson’s Hill is still in danger. Remember this article that Sally wrote about the new restrictive regulations the Board of Supervisors of Newlin Township plan to put in place? We helped turn out a record crowd at September’s board meeting, causing a disgruntled board to postpone the vote for a month. Since then, the farm owners of the township have repeatedly asked for a meeting with the board, to no avail. The board plans on voting on the restrictions again on Monday, October 13th, at 8 pm in The Lanfest Center. If you’re in town for Fair Hill and using Nelson’s Hill, please take the time to come support the farm owners! [Newlin Township Petition]

Harry Meade has had some serious ups and downs in recent history. If you followed the World Equestrian Games, you may recall that his horse Wild Lone collapsed and died after cross country. However, did you know that in August of 2013 he broke both of his elbows simultaneously? Ouch! [More from independent.co.uk]

Not all horses are meant to be ridden. Such is the case with the police horse memorial statues in Chicago. Late Friday night, a 25-year-old man was arrested and after climbing aboard a statue sponsored by the Drake Hotel. Originally, the horse had gold colored wings which appear to have been snapped off in the incident. [More from chicagotribune.com]

Do you have a thing for bling and helping horses? A jeweler in Texas is raffling off a 10-thousand dollar diamond ring in an effort to help support abused and neglected horses. [More from kiitv.com]

Wild ponies are being used to help restore a meadow in Scotland. The hope is that the ponies will graze away the taller greenery that is preventing some of the smaller flowering plants from growing well. The project is managed by a charity called Plantlife. [More from bbc.com]

Monday Video: A peek at some of the challenges presented at Pau as part of last year’s cross country course.