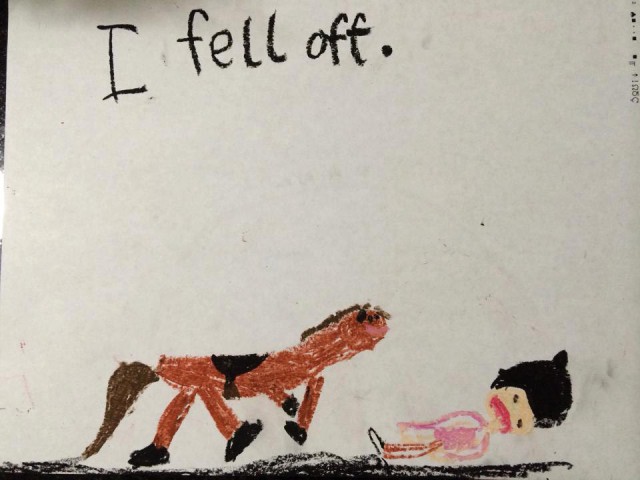 Art therapy for Fizzy after a tumble a few weekends ago. Photo from Clair Thunes' Facebook Page.

As much as we need the rain, I wish there was a way to schedule it for “during my work hours” rather than “on my weekend.” The biggest bummer about rainy weather is that it means more time between seeing barn friends and their kids. I’ll be very honest — I’ve never particularly liked kids, and I absolutely do not want any of my own, but sometimes they make me laugh. Clair’s daughter, Felicity, is one of them. She popped off a couple of weekends ago, and I kept meaning to share this doodle. We’ve all been there, Fizzy, more times than we care to admit!

Build a turkey, win a Tipperary T2 Helmet! In the latest of our wacky contests, we’re asking you to build a turkey from random stuff (wheelbarrows, jumps, hay, grooming tools, saddle pads) found around the barn and send us a picture to win a Tipperary T2 Helmet. If your creation wins, so do you! Entries are due at midnight EST tomorrow. [Build A Turkey, Win a Helmet]

EN fan favorite Ballynoe Castle RM has leapt into the eventing record books as the highest scoring horse of all time. Reggie takes the crown from Winsome Adante, the retired 21-year-old three-time Rolex Kentucky winner, who held the title for eight years with 1,355 points. [More from nj.com]

How does one become a course designer anyway? Four-star rider Beanie Sturgis, two-star rider Helen West and course builder Lloyd Hunt are the three winners of a course-designing scholarship from British Eventing. The Course Designer Scholarship is now in its second year and is supported by the Bill Thomson Bursary, a charity that helps both new course designers and funds specific safety developments. [More from horsetalk.co.nz]

The University of Oregon’s equestrian team is booming. As a former Duck, it makes me smile to know that the school still fields a team. As recently as 2012 the team was in dire straits, having only eight members for both the western and hunt seat teams. This year the team has ballooned to 34 members and has been highly competitive. With the team consisting primarily of younger members, Oregon may be poised to become one of the top equestrian colleges in the country. Go Ducks! [More from dailyemerald.com]

Have you ever gone to look at a horse that was advertised as a certain height only to arrive and find that it was a total misrepresentation? Whether it’s a horse that was advertised as a solid 17.2 hands that might be 16 hands on his tippie-toes, or the “large pony” that is a solid 15.1 hands, it’s frustrating. If you are thinking about selling a horse, Don’t Be That Seller. Make sure you know how to take an accurate measurement. [More from thehorse.com]

Monday Video: Reggie makes easy work of the Head of the Lake at Rolex: