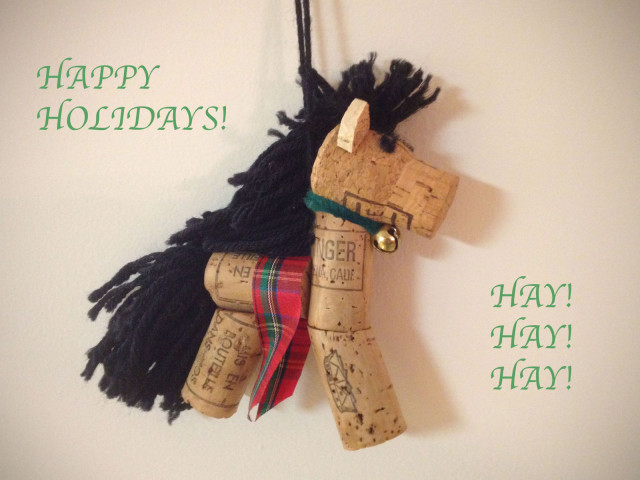 The only holiday decoration in my house, a festive cork pony made by my friend, Mary!

Many of you will be traveling this week to visit friends and family for the holiday. Others of you will be staying home to tend to your four-legged family. Whatever you may be doing, I hope you have a great week filled with good cheer! I’ll be heading home to the ol’ stomping grounds in Area III for a little family time and a lot of foxhunting. Merry, merry, y’all!

Mark Bellisimo and several partners have signed a contract to acquire the Colorado Horse Park. Helen Krieble, who founded the CHP in 1992, announced in August that she would be stepping down from her position as CHP president and searching for a new owner. Bellisimo is the man behind the Winter Equestrian Festival in Florida, the budding Tryon International Equestrian Center in North Carolina, and the owner of the Chronicle of the Horse. [More from COTH]

The EU Commission is updating riding helmet standards. The European Equestrian Riding Helmet standard (BS)EN1384 will be withdrawn from the Official Journal of the European Union. Hats already on the market will not become “non-standard,” but manufacturers will be required to re-certify new products to a standard being developed. British Eventing has announced that it will permit (BS)EN1384 hats in 2015 but not thereafter. [More from British Eventing]

Horse Nation puts a new spin on holiday caroling. They’ve got catchy jingles like “What Shoe is This” and “It Came Completely from Nowhere” to the tunes of popular Christmas songs. Keep checking back to this link all week. I’ll bet your family and neighbors will appreciate these creative renditions. [More from Horse Nation]

Become a sports journalist! The Pan American Games in Toronto 2015 has organized a Young Reporters Program for university students ages 20-25 studying sports management or journalism. This looks like an awesome opportunity to gain experience and do some serious networking. [More from Team USA]

Equine knee injuries may be less common than other leg injuries but they are just as serious. I have fairly terrible knees myself, mostly due to bad conformation and trauma, so I can sympathize with the physical discomfort and limitations that go with such an injury. And I’m not even giving piggy-back rides up hills and over fences. Educate yourself on common equine knee injury symptoms and treatments. [More from The Horse]

Monday Video:  A snowy, Alaskan trail ride with a GoPro. Yes please! The rider takes a tumble near the end but she remounts and carries on.