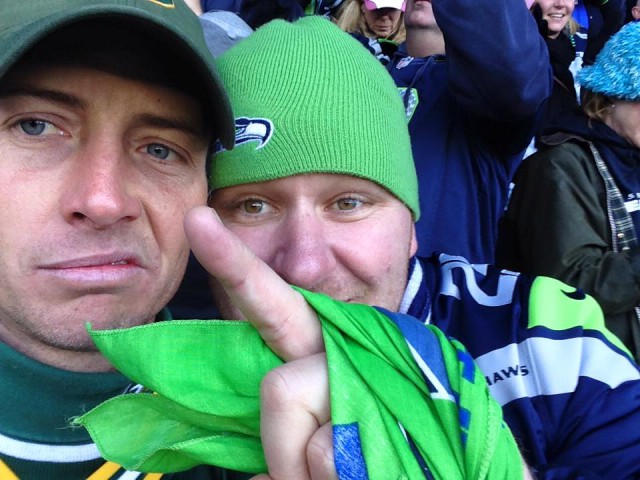 Such a sad face! Poor Jon flew all the way to Seattle to watch his beloved Packers lose. Bummer, dude. Photo via Jon Holling's Facebook

There I was, video chatting about horses (what, it’s my job) and a gleeful shout suddenly emits from the kitchen, followed by the pitter-patter of stockinged feet down the hall. The door flew open and I received a rapid fire play-by-play of the Seattle Seahawks’ overtime win against the Green Bay Packers after having gotten trampled for most of the game. The Seahawks will meet Tom Brady and the Patriots at the Superbowl on Sunday, which will be very interesting indeed! I just can’t wait to see what the Budweiser Clydesdales come up with this year.

Survey time! Eventer Elizabeth Scheltema is doing a research project on Air Vest usage and needs more data. It takes less than one minute to take this survey and your help would be most appreciated. [Air Vests for Eventing Survey]

How will horse sports adapt to the times in order to grow? It’s been made clear that equestrian sports may be facing changes at the Olympic level, and USEF Chrystine Tauber has some interesting predictions as to what they might be. In looking to the future, the USEF has set goals for itself as well. Equine journalist Nancy Jaffer reports. [NJ.com: USEF Gearing Up to Grow Horse Sports] [Practical Horseman: 2015 USEF Annual Meeting]

Announcing at sporting events is harder than it looks. It’s a skill that requires focus and accuracy while engaging the audience with a little extra personality and flair. And no one ever did it better than now retired Thoroughbred racing announcer Tom Durkin. At this weekend’s Eclipse Awards, he received a well deserved Lifetime Achievement Award for his many years of entertainment and enthusiasm calling races. My personal favorite is found here. [NYtimes.com: Famed Track Announcer Tom Durkin Still Busy in Retirement]

It’s the horse owner’s greatest fear and so much of our time is spent controlling various stimuli in an attempt to keep colic at bay. Still there seems to be so much we don’t know about this deadly illness and how to prevent and even treat it effectively. A professor at Southern Illinois University Carbondale hopes that studying the hindgut of live horses through “portals” will help uncover vital clues.  [Horsetalk: Research looks to solve equine colic mystery]

A friend’s pony that was struggling with her weight on lush spring grass was not only banished to the “fat paddock” but also made to stand in the pond for several minutes multiple times a day to help reduce the inflammation in her feet that could have led to founder. The method worked at the time, but the Equine Veterinary Journal recently published a few more “scientific” options.  [TheHorse.com: Which Cryotherapy Method Works Best for Cooling Hooves?]