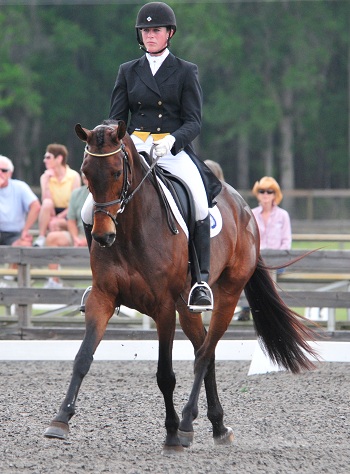 Is it Monday already? The weekend goes by fast when you take a couple of horses to Pennsylvania for Plantation HT. Especially when one person (not me) has her rides at 8 a.m., and you ride show jumping at 5:30. The day really flies, especially when she’s finished cross country and you go get brunch and hang around for two hours and then realize there’s still three hours until you have to put your studs in. I can’t complain though, things really came together this weekend, and my horse is feeling amazing. Our dressage score keeps going down, and he feels more locked on with every jump course we do.

Twin Rivers played host to a CCI1 and 2*, and CIC3* this weekend; Mackenna Shea and Landioso won the 3*, Katherine Groesbeck and Oz Poof of Purchase won the CCI2*, and Jolie Wentworth and Governess won the 1*. James Alliston and Jumbo’s Jake won the Advanced. [Twin Rivers Results]

At the Ocala CCI2*, Lauren Keiffer and Veronica took top honors. They were tied for third after dressage, but fault-free cross-country and stadium rounds saw them rise to the top. Buck Davidson and Santa’s Keeper were second, and Jessica Phoenix on Erodium were third. [Ocala Results]

Black Caviar won her 25th consecutive race, but the scandal that surrounds the race centers around a reporter, namely ‘fifth generation horseman’ Hamish McLachlan, who cantered his obviously lame horse up to winning jockey and horse for the post-race interview. McLachlan knew about the horse’s condition, but says he was pressured into doing the interview from his producers. [Herald Sun]

William Fox-Pitt is obviously very excited about the possibility of winning the Rolex Grand Slam at Badminton this year. Once British Eventing got a hold of him for the interview he said ‘I’ll be giving it my best shot.’ He would be only the second Brit to have one the Slam, the first being Pippa Funnell in 2003. On a sadder note, my ribbon wall will never look like that. [British Eventing]

My favorite person I’ve never met, Hamish Cargill has some updates for anyone who’s been living under a rock for the past couple of months. Here’s the breakdown: Badminton got herpes, understanding FEI qualifications will get you a MENSA call, and next week Hamish talks about bras that make you ride better. I’m hoping he’s going to be wearing it. [An Eventful LIfe]

Lucinda Green gives advice on how to knock winter rust off. I could have used this two months ago!