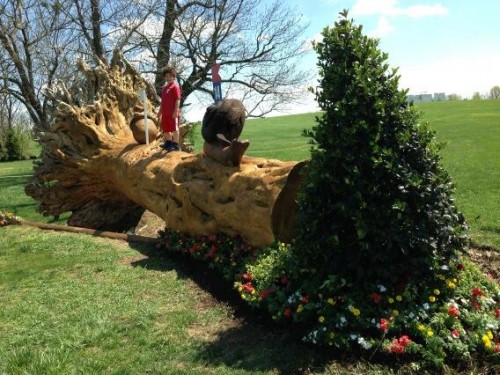 EN's Samantha Clark tweeted this photo from the Rolex XC course. I would totally love to jump it if I knew it wasn't 10 feet tall.

Happy Rolex Week Eventing Nation! This is the second year in a row that I haven’t gone to Rolex. I started going at age 13, and the only years I missed were in 2003, when I was lucky enough to go to Badminton, and 2009, when I was studying abroad and went to Badminton again! Rolex holds such a special place in my heart. It’s where my friend Molly and I wrote a poem about the corn dogs, a song about the Head of the Lake (to the tune of Five for Fighting’s ‘It’s not Easy,’ – the chorus being ‘it’s not easy, to cross-country’), and where I had the perfect strategy of getting to the Head of the Lake when everyone else went to lunch. What’s better than eating a slightly warm lunchable by the water? Saturday I have the morning off, and you can bet I’ll be glued to USEF Network to take in all the action. Ya’ll have fun out there!

Will Coleman and Obos O’Reilly won the CIC 3* at Fair Hill this weekend. Lillian Heard and Share Option were second, and Sharon White and Wundermaske were third. Sarah Cousins and Ideal Contini won the Advanced, Courtney Cooper and Who’s a Star were second, and Phillip Dutton and Cracker Jack were third. [Fair Hill International Scores]

The final installments of the Rolex Featured Riders blogs are out. Read how Jennie Brannigan (Cambalda), Will Coleman (Twizzel) and Stephen Blaumer (member of the Trading Aces syndicate) are spending the final week heading up to the big event. [Rolex Blogs]

Stephen Clarke gives An Eventful Life a funny view into life as an eventing dressage judge. Apparently it’s pretty normal for cross-country fences to block in the dressage arena, he became a ‘stressage’ judge for the food, and you can always pick out a judge from the tan on their right arm. [An Eventful Life]

Rolex isn’t the only big event this weekend; in Australia, the Sydney CCI 3* will begin on Friday. Shane Rose, Megan Jones and Stuart Tinney are just a few of the riders who will contest the event. [Sydney Three Day Event]

Ian Stark ran the London Marathon Sunday, and was one of the thousands who observed a moment of silence for the victims of last week’s Boston Marathon.   Ian ran for the childrens’ health charity, Sparks. [Just Giving]

Horses raced in Libya for the first time since the fall of Muammar Qadaffi on Friday in the nation’s capital, Tripoli. Supporters of racing hope that the sport will gain more popularity and success in the new regime. [Al Arabiya]

Want to win a pair of Dubarrys? So do I, but I don’t think I can enter this contest. Lucky for you, you can! [Dubarry Contest]

Unfortunately, Laura Collett has withdrawn Rayef from Badminton. Here’s to a speedy recovery.

Absolutely devastated….UnfortunatelyRayef has picked up a minor leg injury and has been withdrawn from Badminton. #gutted #heartbroken

We would like to extend our condolences to Susan MacRae for her loss of Flashpoint (“Tip”) at Fair Hill Horse Trials this past weekend. 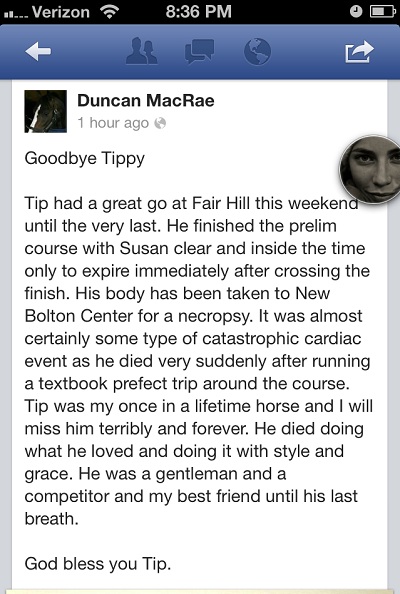