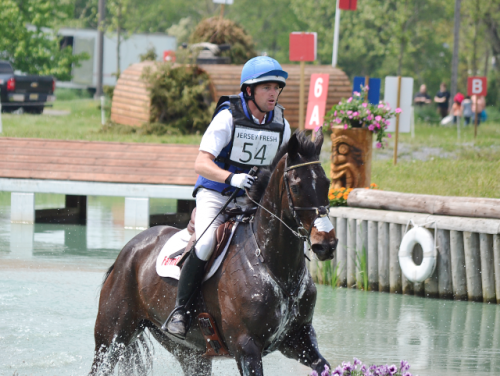 Will Faudree and Andromaque won the CIC 3* at Jersey Fresh this weekend. Photo by Jenni Autry.

Good morning, EN! I hope all of you enjoyed the coverage from Jersey Fresh over the weekend, and everyone at least acknowledged Mother’s Day to the woman who gave birth to them. I love my mom dearly, and will credit her to giving me my start with horses. She bought my first horse, Dusty, an ill-mannered Quarter Horse, and at 15.3 h, inappropriately tall for a seven-year-old. She was never the mom who followed me around with a cloth to shine my boots, in fact I made up most of her Pony Club mandatory volunteering hours, but she is the reason that I’m still riding and with horses today.

Jessica Phoenix and Olympic and WEG partner Exponential won the CCI 3* at Jersey Fresh. Despite dropping a rail in stadium, they moved past overnight leaders Buck Davidson and D.A. Adirmo after they finished with two rails down. Courtney Cooper started the weekend in ninth place with Who’s a Star, but finished in third after a clear cross-country round and one of the only two double clear stadium rounds. [Jessica Phoenix and Exponential Clinch the Win]

Will Faudree and Andromaque won the CIC 3* at Jersey Fresh this weekend. Will and Missy led start to finish, and even came home as the fastest pair on cross-country, before jumping a double clear stadium round. I absolutely adore this mare, and I think great things are going to come from them in the summer, which includes a trip to the CCI 3* at Saumur, France, later this month. Jennie Brannigan finished second on Cambalda, which will give the pair a big confidence boost after Ping’s unfortunate withdrawal at Rolex. Hannah Sue Burnett and Harbour Pilot finished third, and Marilyn Little and RF Demeter were fourth. [Will Faudree and Andromaque Victorious at Jersey Fresh]

The High Hope Steeplechase, held at the Kentucky Horse Park for the past 46 years, was cancelled. Organizers of the steeplechase cited lack of entrants, and the course’s apparent unsuitability to host the race. Interested parties will meet next week to discuss the future of the races. [Kentucky.com]

Horse and Hound is offering a free trial subscription compatible with Ipads, just in time for their Eventing issue. From what it looks like, if we missed anything at Badminton, they’ve got it covered, as well as what appear to be some gorgeous photos and top notch interviews. [Horse and Hound]

Hollywood Park is closing its gates after 75 years of racing. The historic park, which I read about in the pages of Seabiscuit, has been losing money, along with many other race tracks in the United States. Hollywood Park hosted the first Breeder’s Cup race in 1984, and will finish racing for good on December 22 of this year. [KPCC]