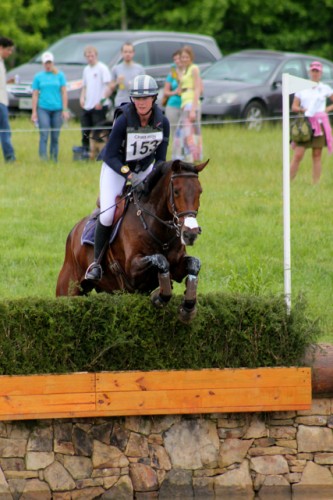 Happy Monday, EN! I spent the weekend horse-less in my home town of Kansas City, where my two best friends graduated from college. The weekend turned a bit sour on Sunday, when, upon waking up, I was alerted that my horse had a chunk torn out of his ear and needed to put on antibiotics because, the cartilage was showing. First of all, gross. Second of all, come on man, every time I leave it’s something different. I didn’t think you liked me that much, but apparently my absence was noted. This should make bridling a breeze in the next couple of weeks. Just in time for a couple of big events. Yay horses!

Lauren Kieffer and Veronica won the CIC 3* at Chattahoochee Hills this weekend, moving up from fourth to first after adding just time penalties to their dressage score. Ellen Doughty and Sir Oberon moved up from fifth to second, and overnight leaders Phillip Dutton and William Penn dropped down to ninth after a stop on cr0ss-country. [CHC CIC 3* Wrap Up]

British eventers were out in force at Rockingham Castle, where William Fox Pitt took second place in an Intermediate section with ex-Doug Payne ride Running Order. He also took Chilli Morning out in the same section; they placed fourth after their early retirement on the Rolex cross-country after leading the competition after dressage. Mary King, Lucy Jackson, and Andrew Nicholson were also in attendance. [Rockingham Castle Results]

Phillip Dutton has given up the ride on Fernhill Eagle, one of his horse’s competing at Rolex this year. Mark Grandia will take over as his rider on the West Coast, and Phillip believes he’s a great horse to show an up-and-coming rider the ropes. [Phillip Dutton FB]

As wel all know by now, there will be no Triple Crown winner this year. In an anti-climatic finish, Orb was bested by Gary Stevens and Oxbow, and a few other horses, to finish fourth. The public will find out the horses running in the Belmont Stakes in three weeks time soon, but sources are indicating that both Oxbow and Orb will feature in the final race of the Triple Crown. [US News]