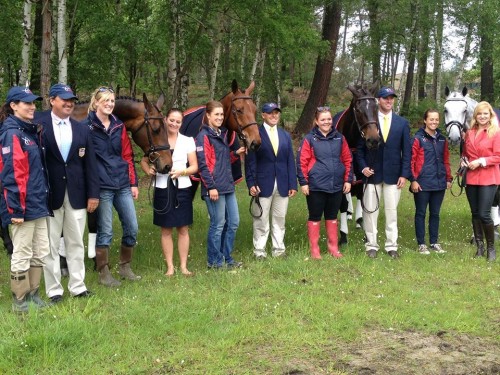 The US team at Saumur, two of whom finished in the top 10!

Happy Monday, EN! I hope you, like me, were focused on the action in France this weekend, as four o our top American riders were competing at Saumur. Many were calling it a big test before the 2014 WEG, which will be held in Normandy, and will feature Saumur’s cross-country designer.

For me, I’m gearing up for Waredaca this weekend, which will be the first event that I’ve competed at twice! This is an exciting marker for me, as Waredaca was the venue where we competed at our first event together last August. I can’t believe how far we’ve come since then, the Beginner Novice stadim scared the pants off of me, and now we’re contemplating a move up to Training. How time flies!

The Spring Event at Woodside

May-Daze at the Park H.T.

Bill Levitt won the Saumur CCI 3* in France this weekend, retaining his lead after cross-country with a clear show-jumping round. Dressage leaders Kitty King and Zidante surrendered their lead after being eliminated on cross-country. [Saumur Results]

Three out of four Americans who started Saumur, finished, and two inside the top 10! Will Faudree and Adromaque were the highest placed pair in fifth, and Marilyn Little finished in eighth. Hannah Sue Burnett and Harbour Pilot dropped down to 26th after a stop on cross-country and two rails in stadium, and Buck Davidson and The Apprentice were eliminated on cross-country after Buck continued on course after failing to jump an obstacle. [USEF Network]

Jock Paget shares some golden nuggets of information he learned while training with Michael Jung, apparently the Badminton winner likes to make lists, and on this one he tells H&H he rides much differently at home than at a competition, and because most of his horses are Thorouhbreds, he doesn’t mind if they jump a little flat. [Horse and Hound]

The 117th (!!!) Devon Horse Show in Pennsylvania kicked off with Junior Weekend. Adorable ponies and pigtails were on display as well as teenage riders competing for a famour Devon blue ribbon. Tori Covin won pretty much everything she competed for in her age group, as did Lillie Kennan. [Chronicle of the Horse]

Photo: springside-eventing: hippobottomass: Yes! This horse is jumping in a onesie. I can’t handle this. tmblr.co/Z8yPUvltK0Gj